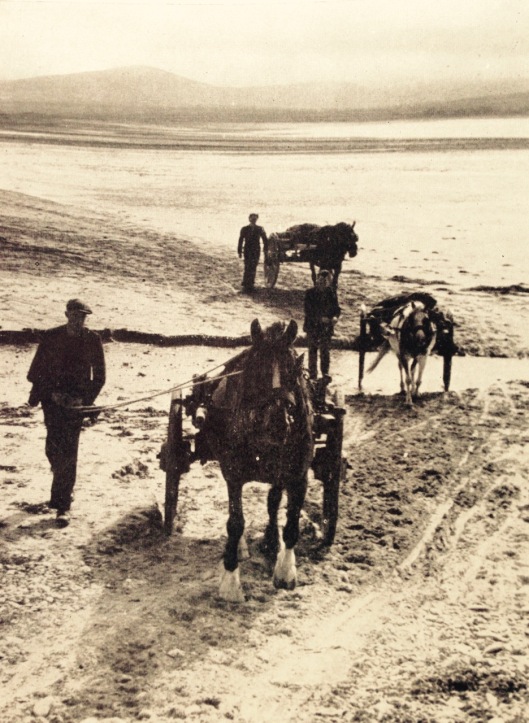 Today is Oiche Fhéile Bhríde – St Brigid’s Eve. The Saint’s festival – tomorrow – marks the beginning of Spring: we will feel the lengthening of the days, and we have to be alert for so many portents.

Firstly – Hedgehogs. Watch out for your Hedgehogs: to see one is a good weather sign, for on Brigid’s Eve the Hedgehog comes out of the hole in which he has spent the winter, eyes up the weather and, if he likes the look of it, starts his foraging. If he goes straight back in again, then you’ll know that the storms will continue! This is according to Kevin Danaher, a frequent contributor on our seasonal folklore. The wind direction on the eve of the festival ‘…betokens the prevailing wind during the coming year; the festival day should show signs of improving weather, although an exceptionally fine day is regarded as an omen of poor weather to…

Originally posted on Roaringwater Journal:
Last week we concentrated on Father James Barry and the poetry he could well have inspired.…

The O’Donovan Bawnlahan Estate passed by Marriage between the General and a Welsh Lady, Miss Powell then to her brother and his son.

Another early photographer at the time was the Rev. Freke of Durrus but thee is no trace of his work.

Sir John Jocelyn Coghill, 4th Baronet, and typically known as Sir Jocelyn Coghill, came from a long-established and wealthy Yorkshire family. He was born in Co.KIlkenny. His second marriage brought him ties to Ireland. When or how he became interested in photography is not known, but Coghill began taking paper negatives by the early 1850s or even before. His photographs reflect the interests of a wealthy amateur and include family portraits, idyllic country scenes, and architectural studies. Coghill became briefly active in photographic circles in 1857, contributing a view to The Photographic Album for the Year 1857; showing nine landscapes in the “Manchester Art Treasures” exhibition; and presenting a paper to the Dublin Photographic Society that detailed his second major photographic tour, a trip through Switzerland in the summer of 1856. He had by then established a strong preference for wet-collodion negatives, perhaps having been cautioned by a colleague who had lost several weeks worth of work when his waxed-paper photographs failed to develop properly. As far as we know Coghill exhibited only one other time, twelve Irish views in the Dublin International Exhibition in 1865.

This biography is courtesy and copyright of the Metropolitan Museum of Art and is included here with permission.

It is difficult as you drive from Drimoleague to Skibbereen over the improved farmland now used for intensive dairying that pre Famine, Caheragh was one of the most densely populated, non urban areas in the world.  The parish had a population of more than 10,000.  It was along with Drinagh and Castlehaven in the 18th century  a centre of Gaelic Poetry.   Eugene Daly in the Skibbereen Journal has recently published an article giving more details:

In the records of mid 18th century the Catholic Church in  Caheragh was a small shed and cabin:

The old church was built by Fr. Dore, one of a number of Tipperary Priests seconded to the Dioceses of Cork.  Father Dore appears as an elector for O’Connell/Roche in the 1841 election.  It is believed that the church was built with stones from Ballyourane Castle formerly a McCarthy castle.

The Priests were dynamic school and church builders, introduced Parish Registers and were highly active politically.   Included were Father Quin in Durrus, Father Ryan Drimoleague and Father Doheney in Dunmanway.

Old Caheragh Parish Church, the church was built by Rev. David Dore about 1823, There are are four or five priest buried in the grounds Rev, Dore, Rev Palmer, Rev Wall, Rev Stack & Rev Hayes. Two outside on the grounds and three inside under the church floor.

The arch over the front gate with the bell tower was donated by a Patrick O’Brien who was related by marriage to the O’Driscoll of Coolbawn. He is better known as Patrick Rocky Mountain O’Brien.  He did write a book still available, Title Birth and Adoption: A book of Prose and Poetry.

Patrick Rock Mountain O’Brien was involved in the Fenian Movement in New York where he died about 1925. He was born in the townland of Dromore and one of the few people to board a ship bound for America at Bantry Bay. He would be a relative of the O’Brien family in Dromore.

The grounds where the church was built was part of Nick Keohan (Keohane) farm also the new graveyard.

In the 1960s after the new parish church was built the parish then purchased land for the new graveyard attached to the east side of the old church grounds. During the purchase they had the area mapped. nearby was part of a Goggin family farm and the old Murphy home. The original Murphy home was on no-mans land a rocky place by the side of the road. (Better known as a home built by a family that had been evicted by a landlord a family that found shelter by the side of the road) .

When you entered the gate to the church grounds on your right stood the old parish hall and attached to the hall was Danny & Nell O’Neil’s home. Just a few feet away was Jerry & Mary Murphys home where they raised 12 children on Jer Murphys wages as a shoe (cobblers).

On the stage in that Parish Hall in the winter of 1959 a play called the Damsel from Dublin was performed involving the match maker stage name was Brian Cleary that trick-ster.

1920s, Dorothea Browne, 2nd Woman to Qualify as a Solicitor in Ireland.

Her mother was Mrs. Brown, nee O’Mahony, Ahagouna.  her grandmother was Mercy Peer that family probably originally from around Crookhaven of Huguenot extraction. She went on to found the firm of PF O’Reilly with her husband which is still operational.  He husband was a Fine Gael Senator and later Taxing Master of the High Court.   Her sister qualified as a doctor and was the first female Area Health officer in East London.

Thanks to Peter O’Driscoll, San Francisco.

“This Classic report of 1948 score” this is a report on a famous (road bowling contest between Jimmy Crowley and Dan Dempsey, Glandore, it was reported in The Kerryman a newspaper on Saturday, April 3rd 1948.

The two reasons this contest became famous are:

One the score was never finished.

Two it took place when bowl playing was making a transition from been played on a rough surfaces road to played on tar surfaced road.

Jimmy Crowley and two brothers: his older brother John and younger brother Joe are better know as the Crowley family of Colomane that owned and operated a Ransom Thrashing Machine. They were one of the first to bring this modern type Thrashing Machine to West Cork. They traveled from farm yard to farm yard to thrash the local farmers grain crops of oats, barely & wheat.

This Crowley family were first or second cousins to Jeremiah Wholey that is listed in the new post on West Cork History (of May 2015) Bringing the Iron Wheeled Threshing Machine from Kealkil, West Cork from 12th October to West Waterford in the 1940s and other areas. These Crowley also followed in the foot steps of Jeremiah Wholey to some area of County Waterford.

Morgan Donovan is one of the O’Donovans, Mountpelier (Douglas, Cork) acquired through Ronayne marriage who converted to the Church of Ireland some of  whose descendants became ‘The O’Donovan’ though disputed among other branches.  This branch of the O’Donovans originated in Union Hall.  On the death without issue of Lieutenant General O’Donovan of Bawnlahan (Myross) early 19th century the Chieftainship passed to this branch i.e. the tithe ‘The O’Donovan’.  In the 19th century there was a marriage between the Ronaynes and Evans of Caheragh, both are buried in old Caheragh graveyard.  Possibly the magistrate:

He holds Lisangle in Caheragh.  One of the families there were the Evans one of whom Rachel married 1805 James Crowley, probably from Ballyourane, an Apothecary in North St., Skibbereen and a brother of ‘Dr’ Jerry Crowley also an Apothecary of North St.

The Tonsons are descendants of Sir Richard Hull of Leamcon Manor, Schull.  later they lived outside Fermoy.

Tim Donovan is the ancestor  of Timothy O’Donovan, Richard O’Donovan and Dr. Daniel O’Donovan, all Magistrates,  of O’Donovan’s Cove, Durrus Timothy is buried in the old Caheragh churchyard.  According to tradition the rents for Caheragh were received by the the O’Donovans at The Cove in gold sovereigns al all washed in boiling water.

The Kingstons became one of the most numerous families in the area with Church of Ireland, Methodist and Catholic branches.

Harris/Daniel connection, The Harris family are also in Durrus 18th century possibly linked to the Evansons:

The Limrick house is the large one to the left in the 1900 Lawrence photo.

The East Company recruited for their Army and Navy well into West Cork  There are references to recruits from the most remote townland from Beara from c 1760.  The Skuse family of Clashadoo Durrus and Deerrynafulla, Ballydehob is descended from an ancestor born in India the father presumably from Glengariff serving as a soldier in the service of the East India Company.

John Limrick, Esq., (1812-1890), 1860, Union Hall, 2nd son of Captain William Somerville Limrick who died 1831, Union Hall, patron Masonic concert, Skibbereen, 1862, sitting Skibbereen 1850, subscriber Dr. Daniel Donovan ‘History of Carbery, 1876. 1870 return, 8,181 acres. Some of his wealth came from his father who, having probably served with Arthur Wellesley (Wellington) at the battle of Seringapatam in 1799, gained a substantial amount of prize money in India. The prize money after Seringapatam was over £1M distributed among the victors. Col. Limrick then became a member of the East India Company on his retirement, maintaining a London address.  Col. Limrick’s brother, Rev Paul Limrick, garrison chaplain at Fort William in Calcutta, is also believed to have owned considerable property in India. I guess that family connections to the Sullivans  (Benjamin Sullivan Cork Attorney self styled Ó Sullivan Mór kinsman to Laurence Sullivan, Chairman East India Company) would have helped.  It  assumed John Limrick’s daughter Lucy inherited his estate which then passed onto the Spaight family.    Executor of brother Dr. William Limrick 1869, £3,000.  Probate  1890 to William Tower Townsend JP, Myross Wood, effects £3,647.