While reading the evidence before a parliamentary enquiry into land tenure taken in Bantry in 1844 and came across a reference to a tenant paying his landlord with a £3 note.  I never came across this before, I do remember the old orange 10 shilling note.

When I checked it out the history was interesting.  Ireland apparently joined sterling in 1825 (currency fluctuations are not new) and the Bank of Ireland was given authority to issue notes.  Included was the £3 and 30 shilling notes.

Irish and Scottish Mercantile Networks in Europe and Overseas in the …

Charles Hennessy was born to a well connected family in the Blackwater valley, Co Cork in 1699.  The family was connected to the Nagles and other old English families whose fortunes had changed with the new political situation at the end of the 17th century.  The statesman Edmond Burke was from the same milieu.

Charles emigrated to Ostend in 1730 and was helped by a close network of Irish merchant families involved in the butter, hide and general trading.  There were families with Youghal connections such as the Rays and Lucans and from Cork the Roches, Rays and Coppingers.  These emigre Cork families were from an old English background except the Coppingers who were believed to be of Viking origin. These families had been displaced from the prominence they enjoyed as Cork merchants by the ‘new English’ and were seeking new opportunities.  He was initially involved in provisioning ships with butter and later became involved in the tea  trade purchasing teas from the East India Company and managing to export it to England without the inconvenience of paying duty.  In this he again was relying on the extensive Irish network.  His second marriage was to Mary Coppinger of a family with close Cork links, her brother Thomas was a merchant based in Gothenburg.

Over the years his business interests became quite extensive into shipping, grain speculation he rode various mishaps deftly and died on a visit to Cork in 1758.  His family continued the business into the next generation.

JJ (John Joseph)O’Leary is the one at the rear with the glasses and hat.

Another early influence on founding of Aer Lingus:

https://durrushistory.wordpress.com/wp-admin/post.php?action=edit&post=3631
Does anyone anything about JJ O’Leary?.

I have come across a few references to him over the years. Originally a civil servant.  He was the managing director of Cahills the printers who were based in Park Gate, later East Wall, Dublin and did a lot of official printing including Dáil Reports.   His period was from the 1920s until he retired in 1973.  He was reputedly the owner of Cahills and the company was sold in 1971 he retired from active business in 1977.

From Pat Campbell ‘Cahills Printers was the first company in the country to pay a female employee £1,000  per year.  Also most of their top senior management team were females. This was in place in the 1960’s when I joined the company. Clearly these appointments were made many years before that. The company was in Parkgate Street during J.J O’Leary’s time and not East Wall which came much later.’

He was one of the three who proposed the setting up of Aer Lingus in 1934.  The others were Sean Ó h-Uaghaigh and Colonel Charles Russell who was the driving force behind the project, he had been the chief of the Corps from 1922-1926.  Technical assistance was provided from Colonel Delamere then serving in the Air Corps.

O’Leary was a director of Aer Lingus and in fairness to them they deserve great credit for what we now have in the whole airline, leasing etc sector.

In 1944 he was a director of the Industrial Credit Company Limited along with J.P.Colbert (Chairman), T. Caffrey, and M.W. O’Reilly., as well as Aer Rianta Ltd from 1943. He is with both companies in 1953 taking no fee as a director.

In 1959 there was a picture of him returning from an Aer Lingus flight from New York with Barry McGovern and John Ford.

He was a keen yachtsman being Commodore of The National Yacht Club from 1955-60, his yacht was the ‘Fara’ a 30 meter boat. He donated the Muglin’s Cup which is still awarded.  He was also a patron of the Abbey Theatre.

He was for many years a spokesman for the Irish Employers Federation at International Labour Conferences.

He looked to liberalize the static society and apparently provided £1,000 a year to Seán Ó Faoileáin to assist in the publication of ‘The Bell’ and provided an office.

He was married but separated for many years.  He had a long term relationship with Dr Thekla Beere the first woman Secretary of a Government Department.  He lived at 2 Seafield Avenue,  Monkstown Co. Dublin.  He was survived by his nephew John O’Leary, a Ryder Cup Golfer, Michael O’Leary a businessman and nieces Anne and Josie.

On the 31st December 1956 he was appointed to the Board of the Hospital Library Council.

He was active in theatrical circles. The actor Barry Fitzgerald when returning Dublin stayed with him. He was a member of the Dublin Theatre Festival Committee in 1957 and was a friend of Seán O’Casey and his wife.

The Roa Mooney (Abbey Actress) papers in the National Library contains some of his correspondence an a picture of him at an ICC board meeting..

1959 with Barry Fitzgerald on Aer Lingus flight to Barcelona.

http://irishphotoarchive.photoshelter.com/gallery/1959-Barry-Fitzgerald-and-J-J-OLeary/G0000Yw2Ypu_UCPM/C000094Ti_qheqAk
He may have come from Co. Wexford.

The Irish Times had an obituary of him on the 19th January 1978 as did the Irish Press and Independent.

For John King’s meetings ad discussions with him:

The information was collected by the RIC.  Tolls were traded as a form of property. 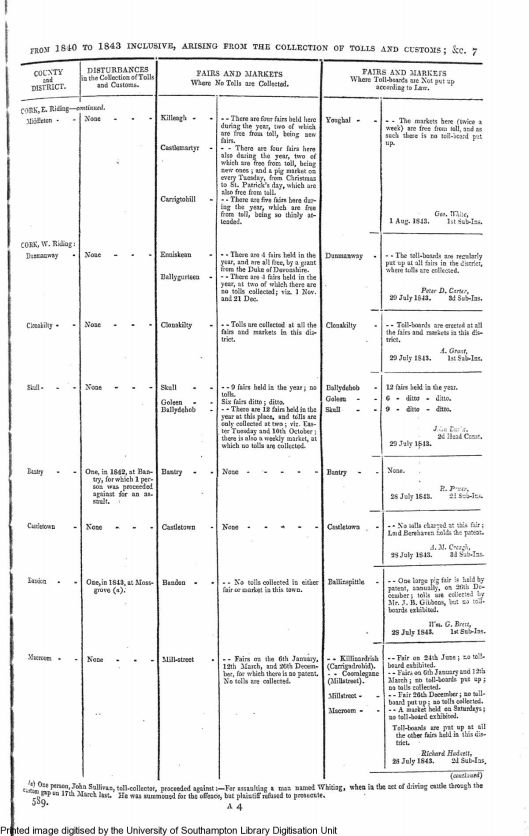 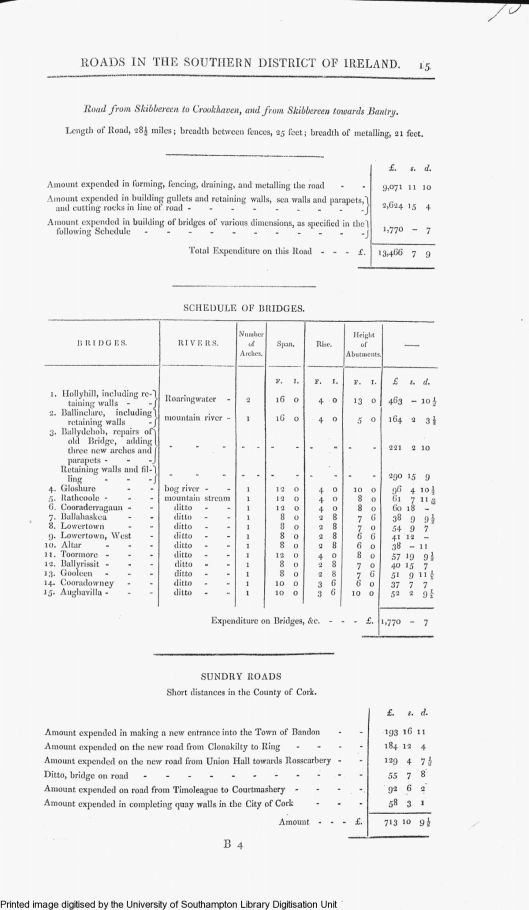 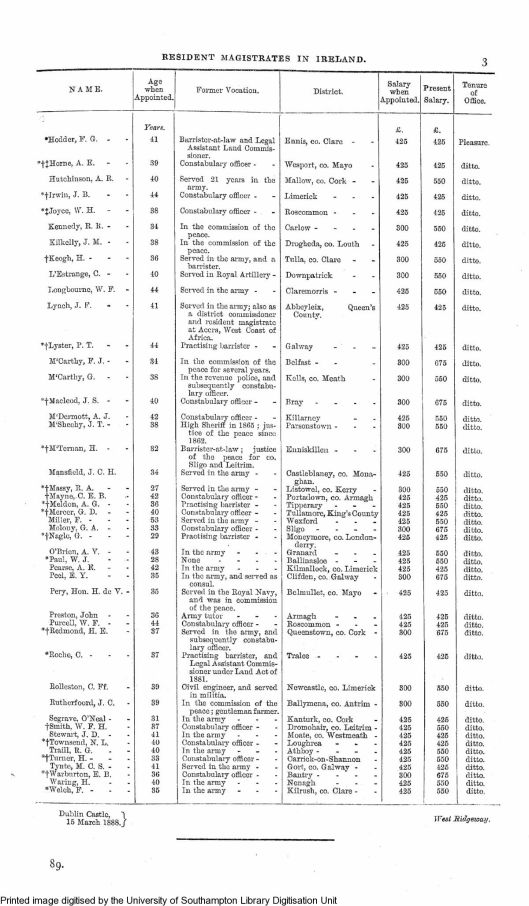 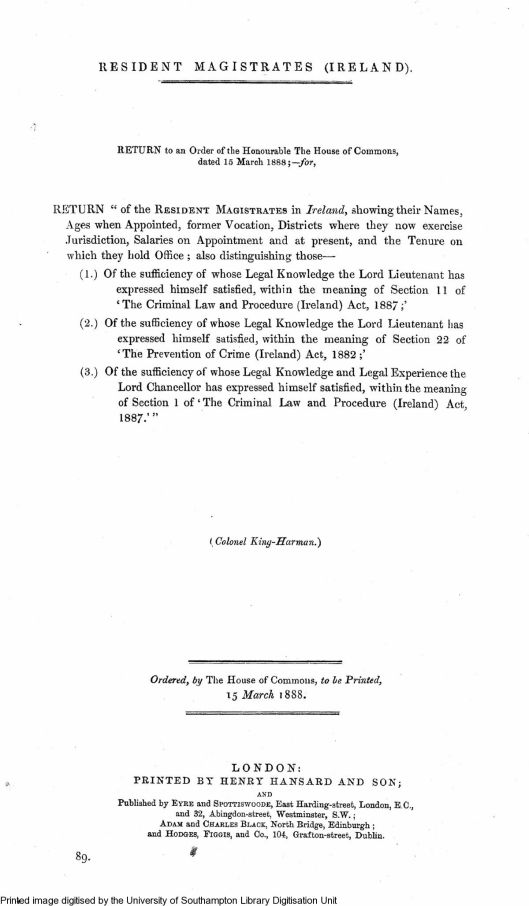 In pre-independence Ireland, a Resident Magistrate was a stipendary magistrate appointed to a county (outside of the Dublin Metropolitan Police District) to sit among the justices of the peace at Petty Sessions in that county. They were appointed by the Lord Lieutenant of Ireland (in reality, therefore, by the Dublin Castle administration in Ireland). The Petty Sessions in the early 19th century replaced the Manor Courts which were inefficient and often corrupt.

Petty sessions were originally held by justices of the peace, who were lay people (and in Ireland, typically members of the Protestant Ascendancy and as the 19th century advanced local eminent citizens), as preliminary hearings for Quarter Sessions and the assizes). From 1836, the justices acted under the supervision of resident magistrates. The Petty Sessions (Ireland) Act 1851 regulated petty sessions, organising the country into petty sessions districts and providing for the appointment of clerks of petty sessions. A series of Summary Jurisdiction (Ireland) Acts, beginning in 1851, vested petty sessions with summary jurisdiction in minor criminal matters. Both these Acts are still on the statute book, though heavily amended. In Dublin, the divisional magistrates exercised similar power to petty sessions under the Dublin Police Acts.

In practice the Clerk of Petty Sessions held considerable sway having a knowledge of law even if rudimentary and procedure. 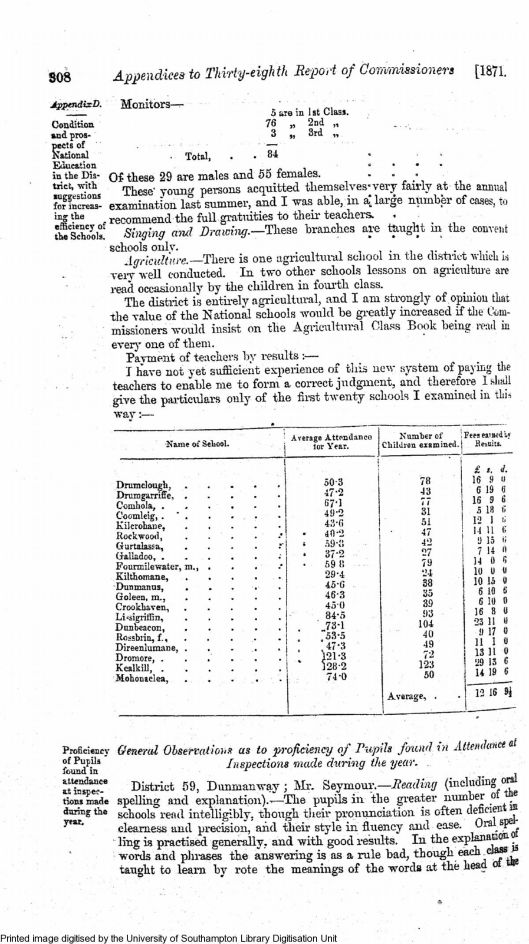 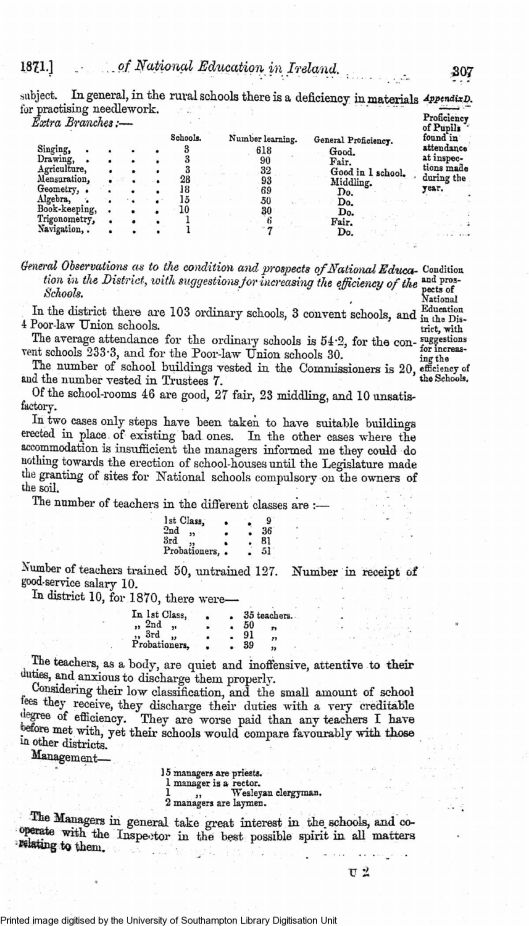 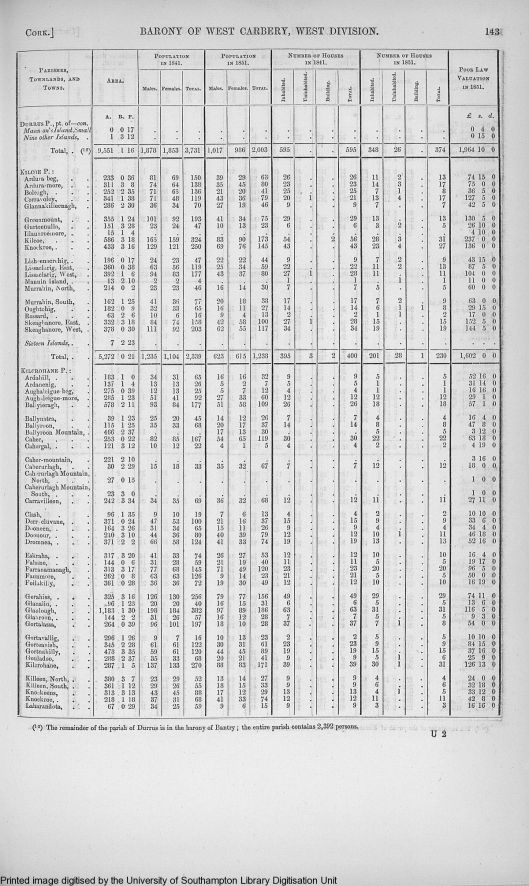