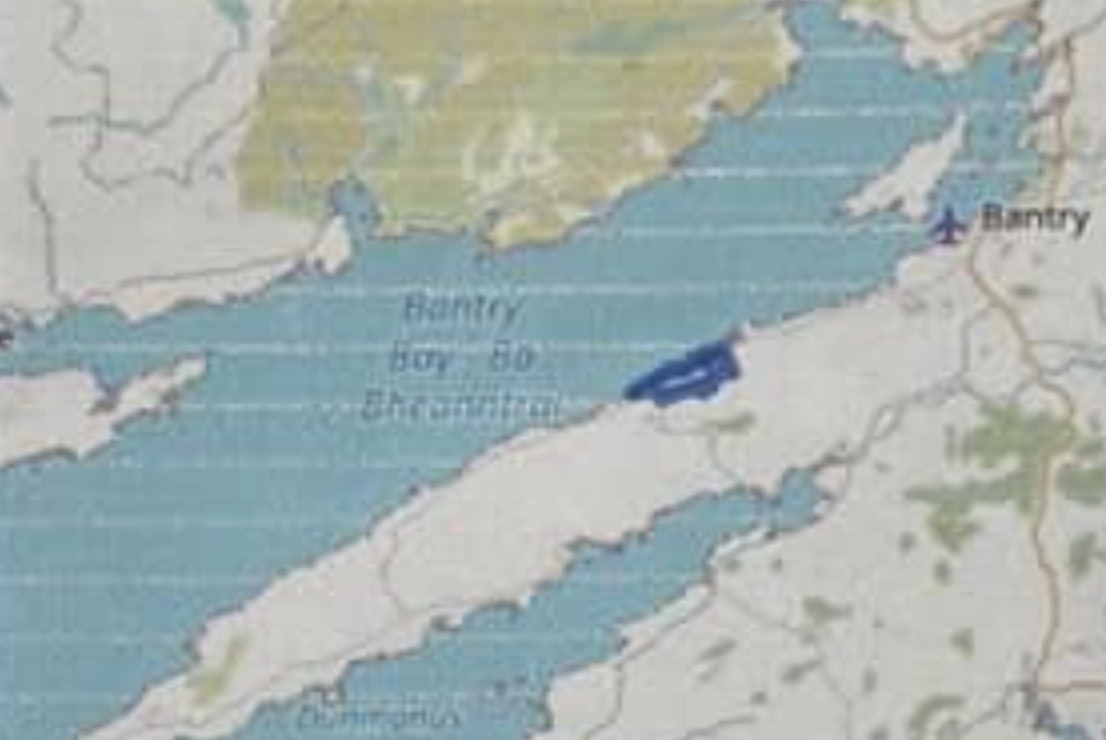 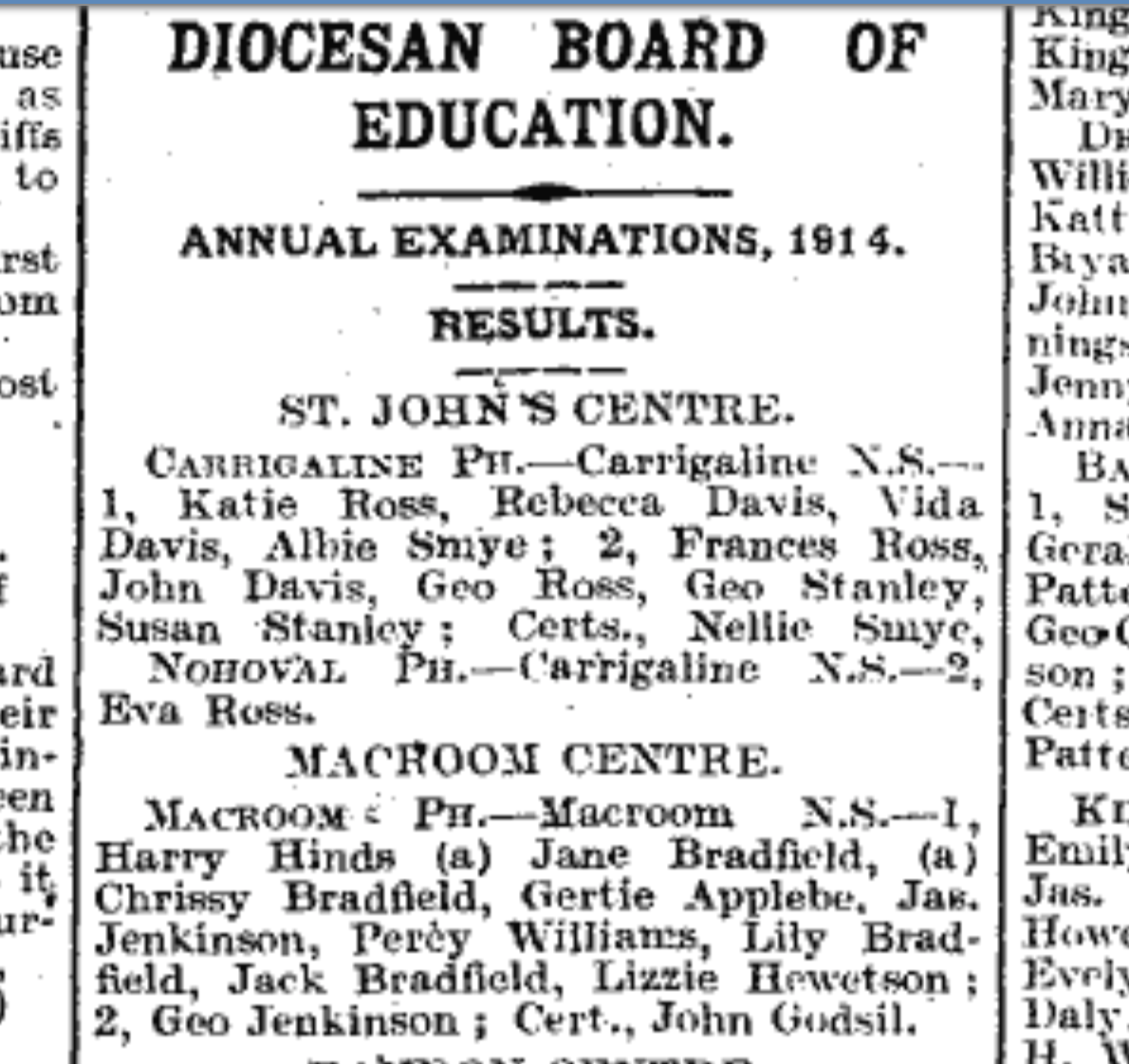 Such an interesting piece, showing the tenor of the times. I think the Rathclaren church is different from the one in Timoleague (The Ascension, in your heading). I think the one referred to in this article is called Holy Trinity and is this one: https://www.buildingsofireland.ie/buildings-search/building/20912325/holy-trinity-rathclaren-church-of-ireland-church-farranagark-cork It does indeed have an interesting old graveyard and a holy well nearby.

Further Report Conveyed to His Grace Lord Primate of the Church of Ireland in Dublin 17th December 1731 on the State of Popery including, Aughadown, Ballinadee, Caheragh, a small shed and cabin, Drimoleague, an altar moved from place to place, Fanlobbus (Dunmanway), three small huts open at one end, Drinagh one small hut open at one end, Kilbrittain, Kinsale, Desertserges, Innishannon, Ross, in a field under a hedge, Rathclarin, Schull and Kilmoe three Mass houses three thatched cabins Priests mostly Friars daily moving to and from France and other Popish Countries from Crookhaven, in the Parish of Kilmoe A Taste of What is To Come Pre 1700 Deeds Barony of Carbery, from 11 Million Records of The Irish Land

AMONG the 11 million documents in the Irish Land Commission Records.  Thankfully now agreed in principle they are to be opened up. 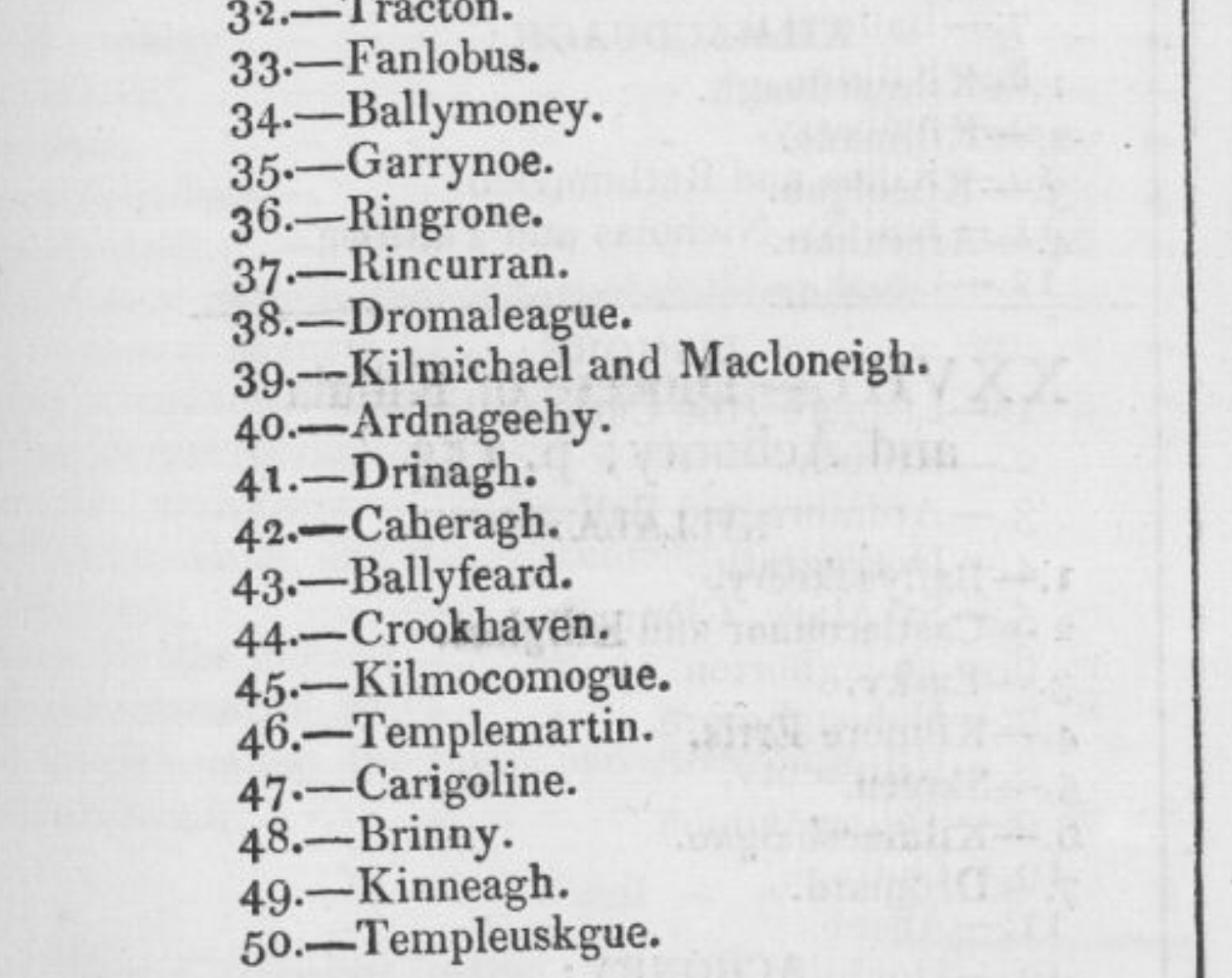 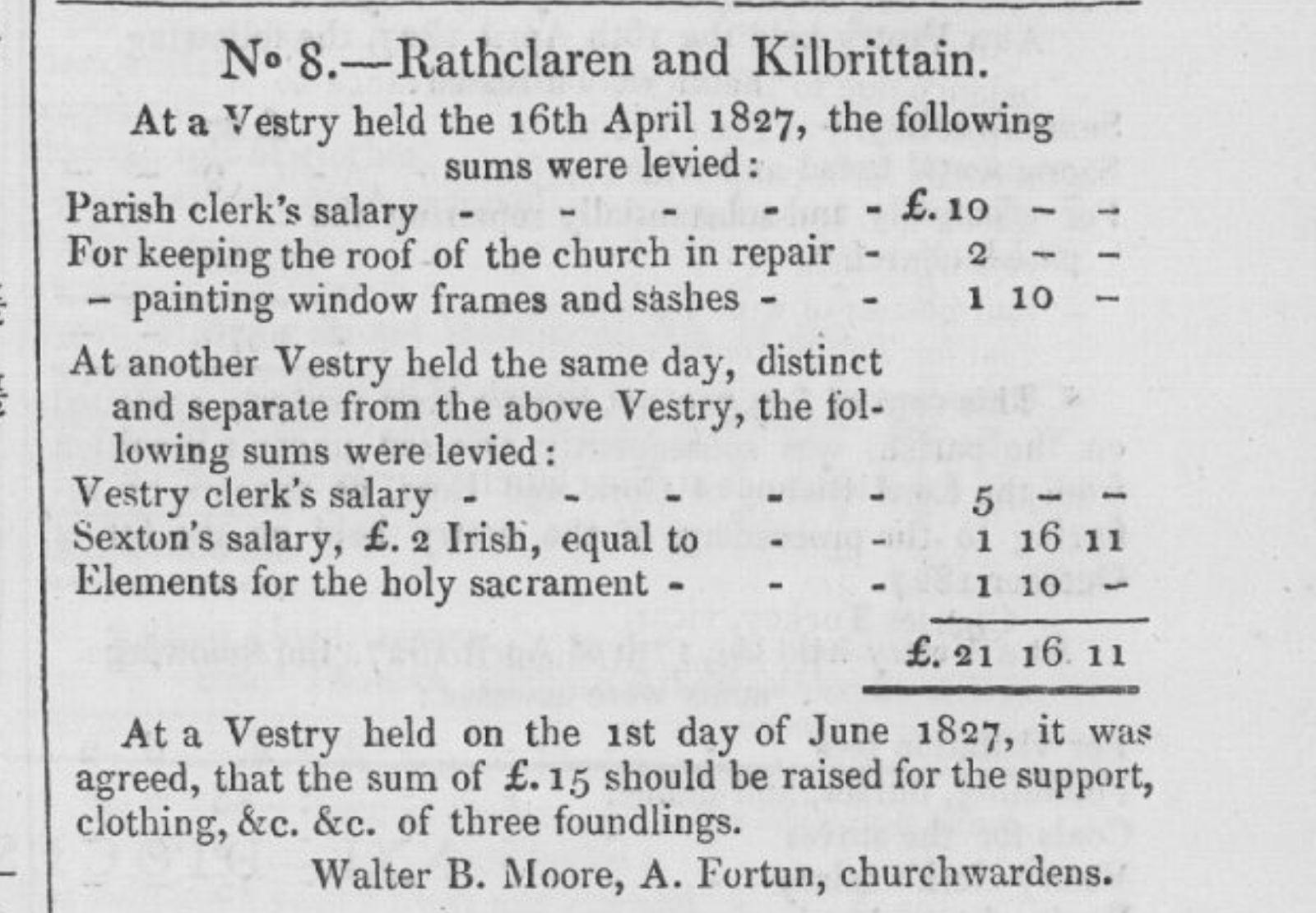 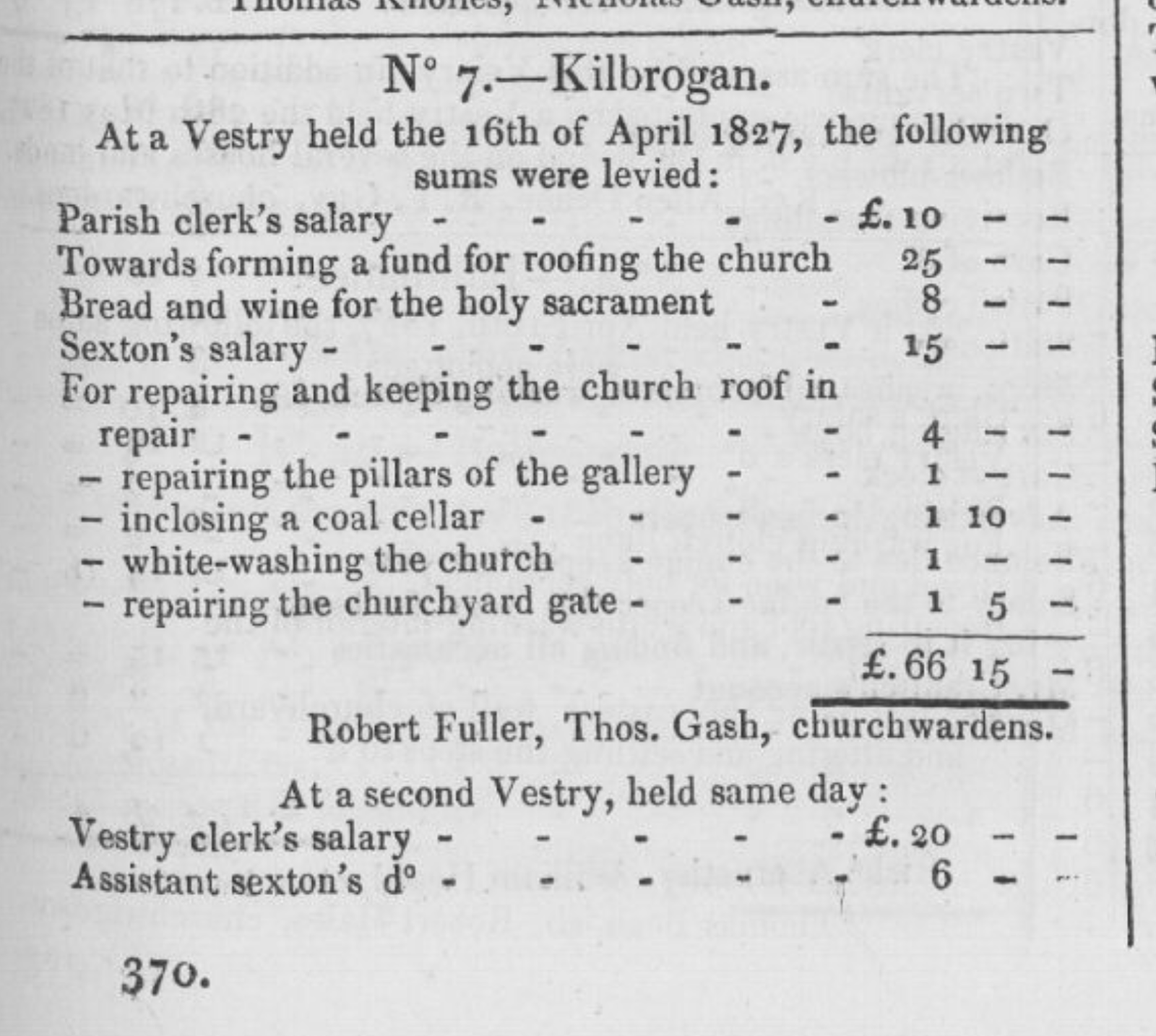 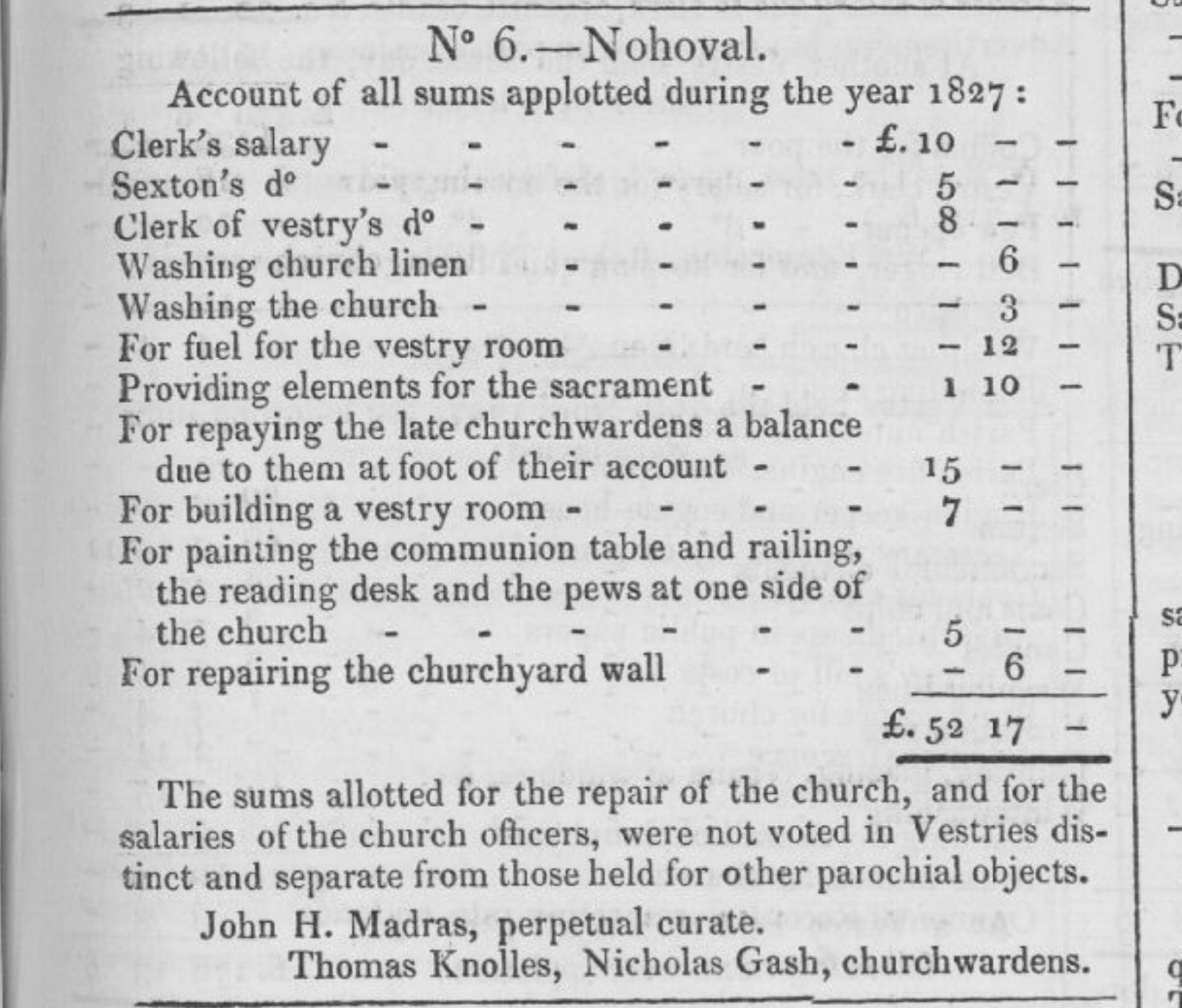 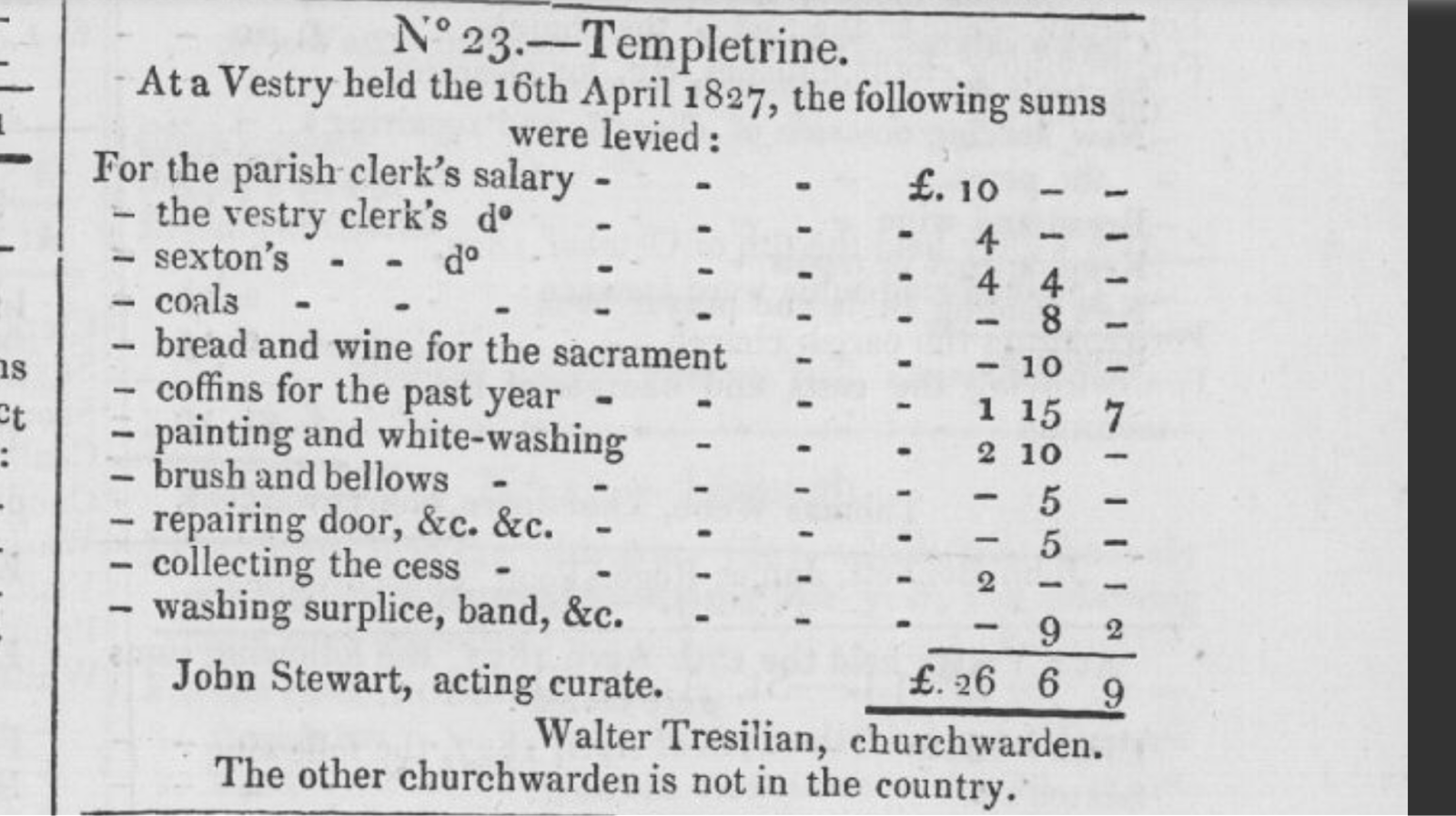 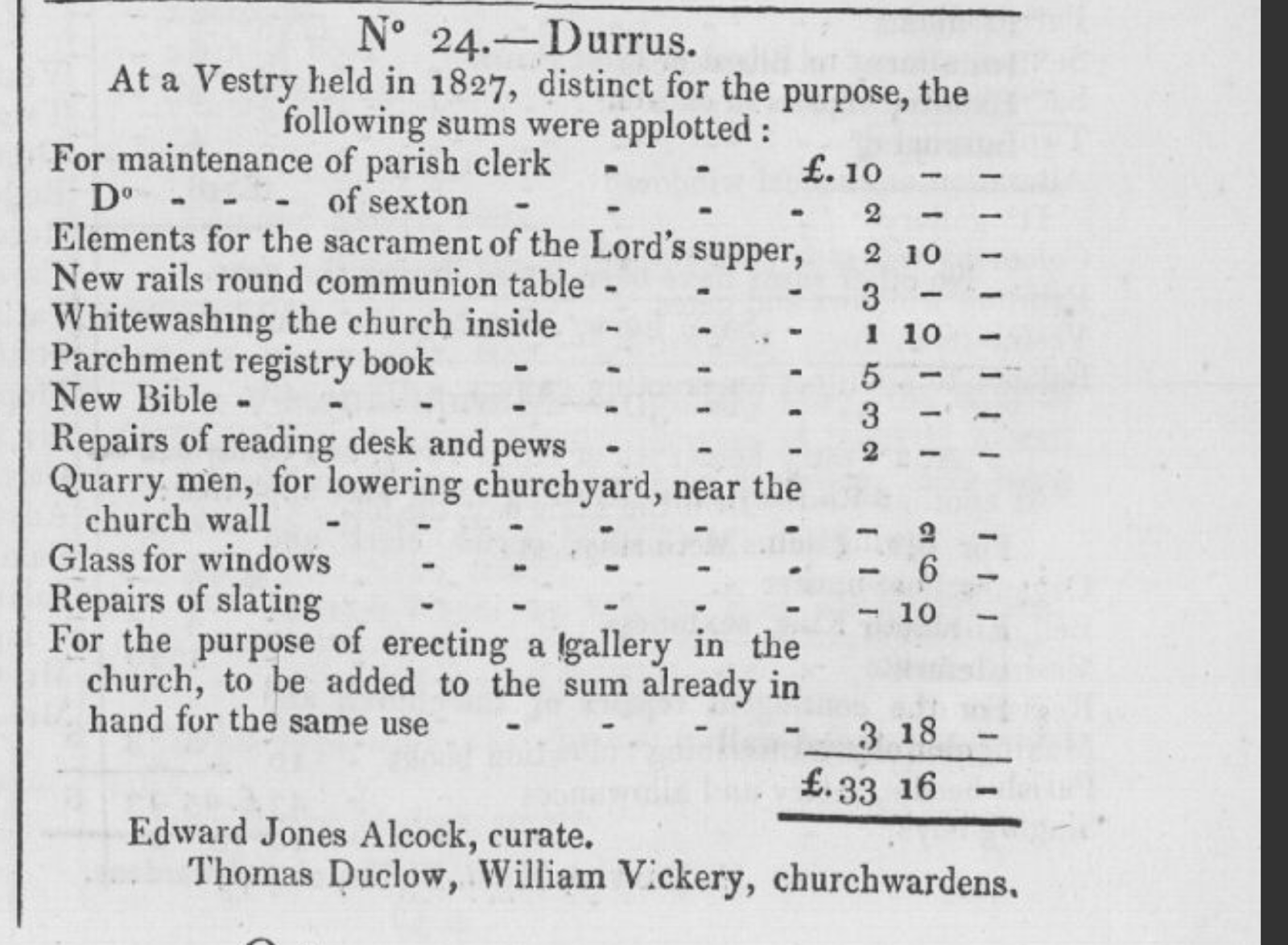 March 1798.  Rosscarbery, Drimoleague, Castletownbere, Select Vestries meeting to Levy a Rate to provide Four Men to Serve in  Militia and to Levy Seven  and a Half Pence Per Gneeve.  Further meeting August 1803 to levy £1-6-o per ploughland to raise 5 men for Militia and £5-13-9 on town of Rosscarbery. Cost of Levy for Cork City and County.

Meeting of Select Vestry, Skibbereen, West Cork, 10th May 1832, to appoint Officers of Health under Statute of the 59th year of His Late Majesty, King George 3

Updated version many heavy hitters at the funeral including Lord Chancellor:

I see the obits mention tre link to O’Sullivan Bere through his grandfather William O’Sullivan, Carriganass Castle I think we both agree unproven.  I see no mention of probate. Maybe if the Land Commission took over they dispensed with probate.

His political outlook would be consisted with his uncle John Edward Barrett. He married William O’Sullivan’s daughter and managed her property. He was a hate figure to such as James Gilhooley, MP for West Cork. Barrett lined up with the Paynes agents to Lord Bantry and Lord Bantry as a Conservative faction in West Cork. 
Thomas David was born in Mallow, his father a military surgeon. HIs Fathe died when the family were young and his mother Mary nee Atkins from Doneraile moved the family to Dublin. His brother John became a doctor like his father. Apparently his passion was family genealogy and he was able to avail of the records of the Public Records Office all destroyed in 1922.

Luckily all his work is in the National Library. 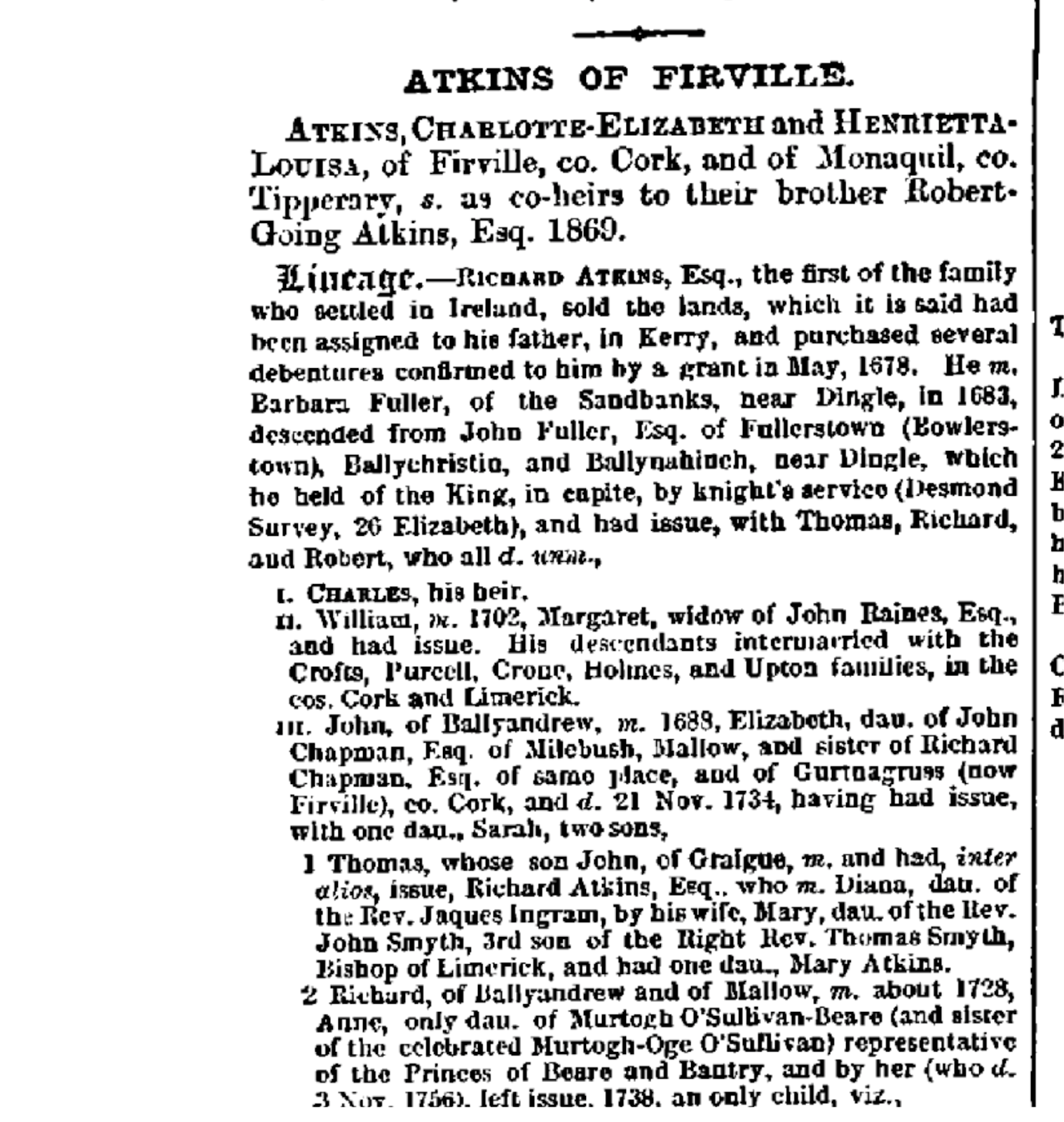 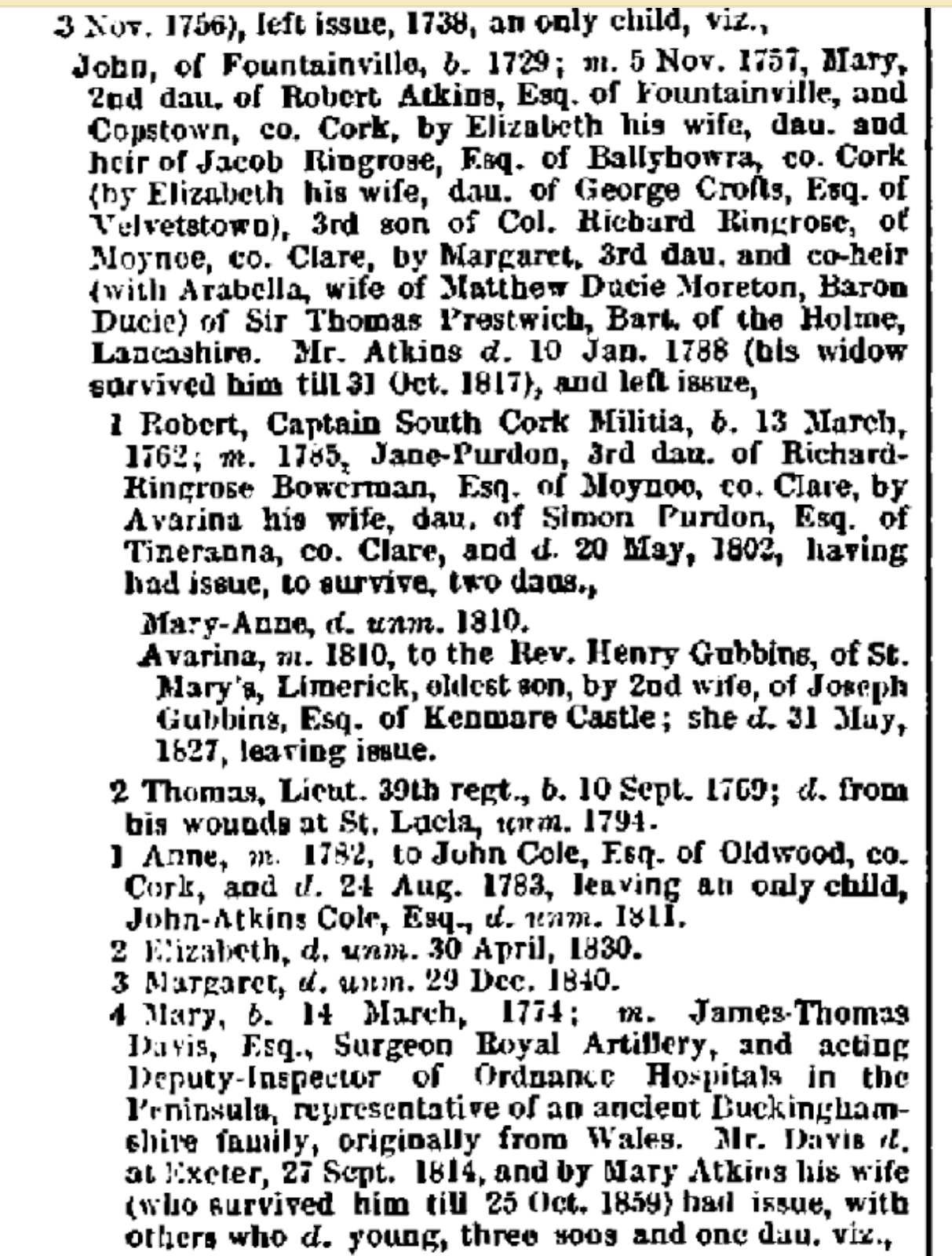 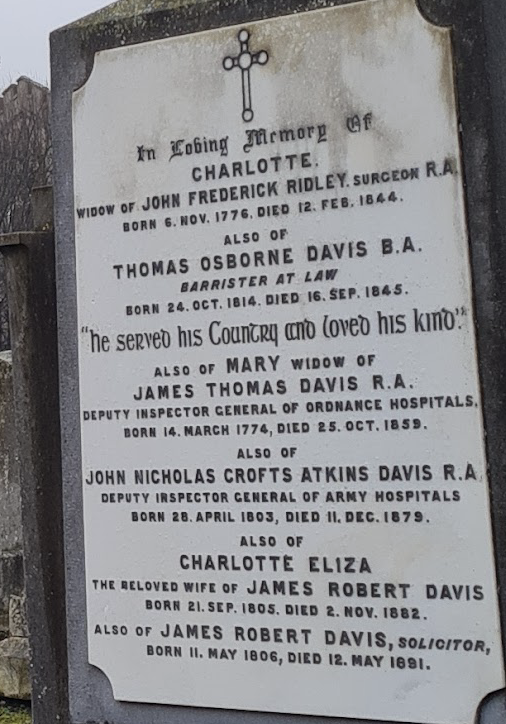 She did so with the aid of her family in Mallow, but with the death of her own mother in 1817, she promptly left for Dublin. It was here that Thomas spent his childhood, first in Warrington Place, before moving to Baggot Street in 1930, which was also the place of his ill-timed death in September 1845, at the age of thirty, due to scarlet fever.

One day in the spring of 1842 he was walking with Gavan Duffy and John Blake Dillon in the Phoenix Park. During that walk they decided to found a newspaper, and on Davis’s suggestion it was decided to call it ‘The Nation’. The object of the new paper was- ‘To create and foster public opinion in Ireland, and to make it racy of the soil.’ And so was founded ‘The Nation’, the paper that was destined to carry the gospel of Davis and the Young Irelanders to the four corners of the land and to raise a broken and subject people out of the deep slough of slavery into which they had sunken, giving them courage and dignity and making them strong and self reliant and firm in their demands for justice and freedom.

The rousing poems and ballads of Davis were recited and sung everywhere. Soul stirring compositions like ‘A nation once again’, ‘Clare’s dragoons’, ‘My land’, ‘Fontenoy’, ‘The bridge of Finae’, ‘The west’s asleep’ and ‘Tone’s grave’ gave back the old proud spirit to a lifeless nation. The people found themselves taking pride in the past, and taking hope for the future. Thomas Davis had touched a responsive chord in the torpid hearts of his countrymen.

In the first year alone he published over two hundred essays and editorials, as well as a wide variety of poetry and literature.

‘When boyhood’s fire was in my

I read of ancient freemen,

For Greece and Rome who bravely stood,

Our fetters, rent in ‘twain.

And Ireland long a province, be

A nation once again.’

‘I walked through Ballinderry in the spring-time,

When the bud was on the tree;

And I said in every fresh ploughed field beholding

Scattering broadside forth the corn in golden plenty

On the quick, seed-clasping soil,

Even such this day among the fresh-stirred hearts of Erin,

Thomas Davis is thy toil.’ 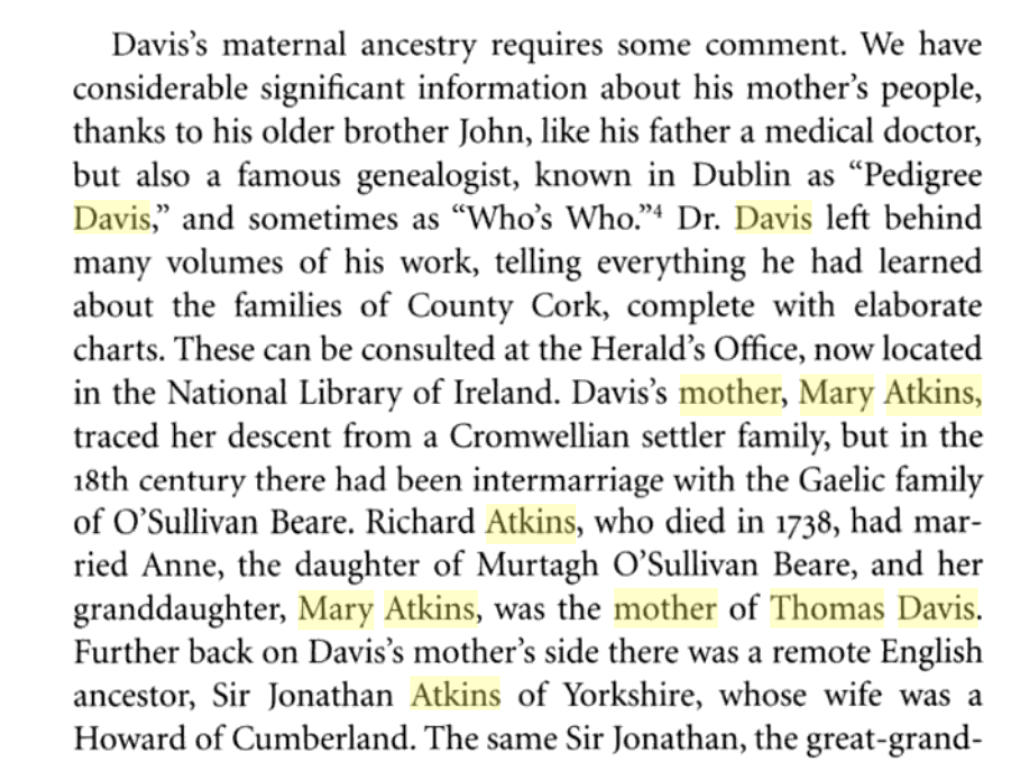 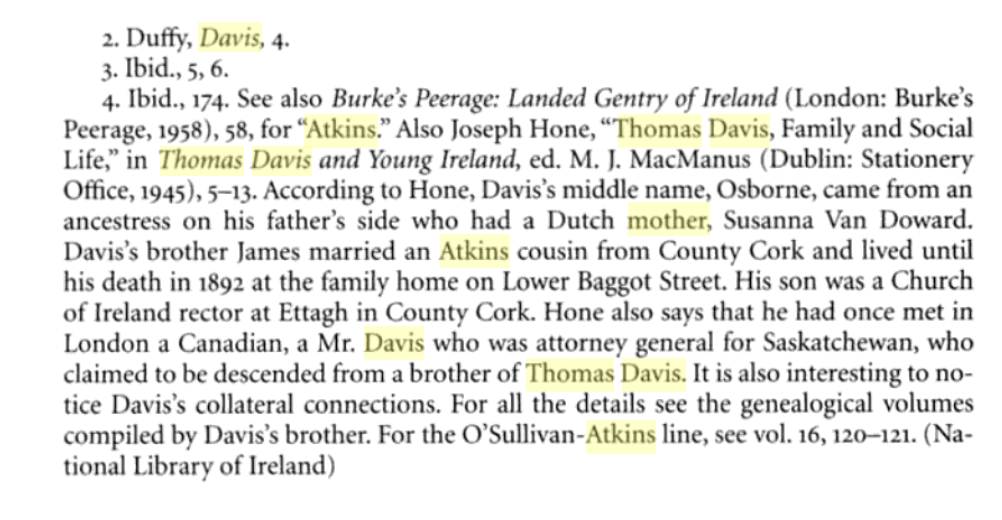 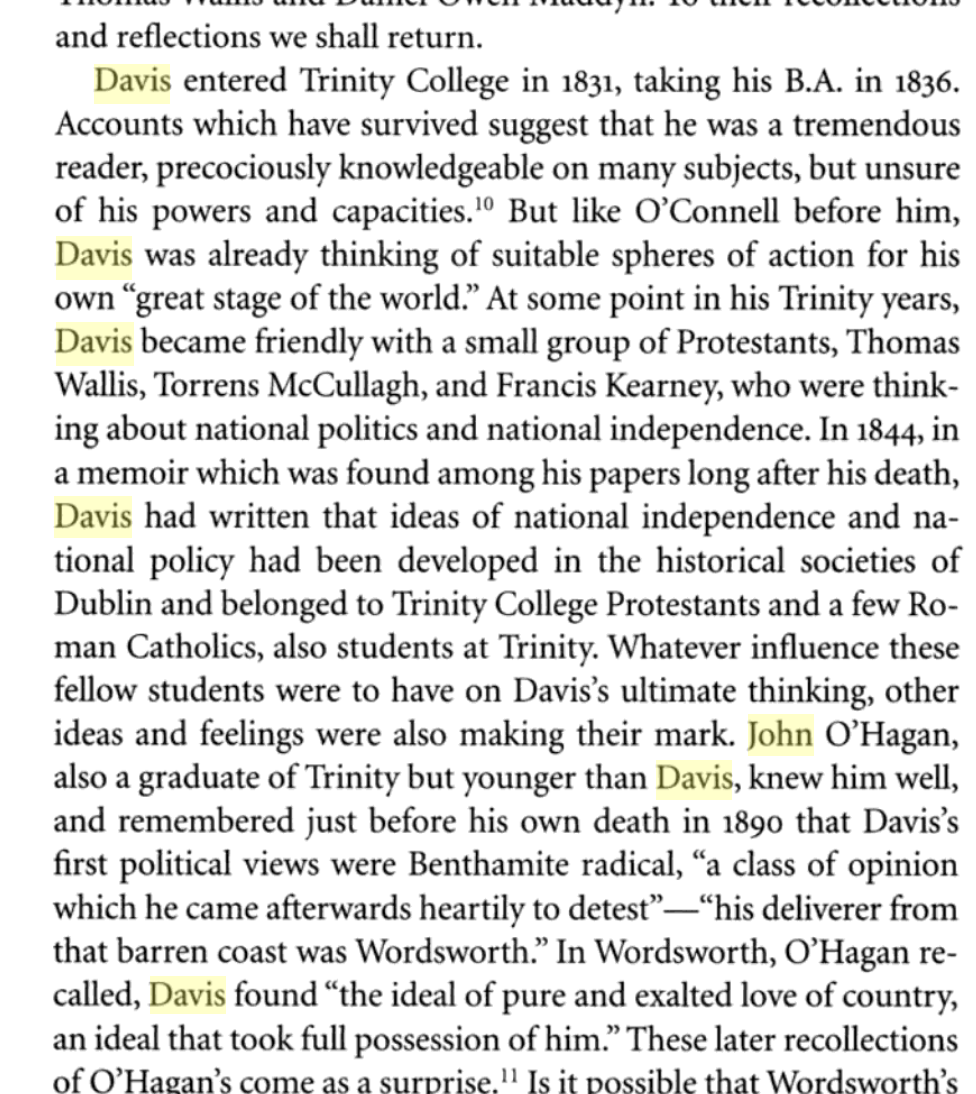 From and O’Sullivan researcher:

Anne Sullivan of Ballyandrew Doneraile was John William’s (Mortai Og’s) sister. She always described herself as a “Glanrought Protestant” Dr Davis worked with James Hampston and Murtai’s daughter Kate on the Davis/McCarthy trees.

The Davis’s were very proud of their links back to John William.

Ballyandrew today is borderline derelict, the farmer who lived there died a few years ago and left 2.5 million, no one knows where he got it.

(I wonder if he dug up a Jacobite chest?) 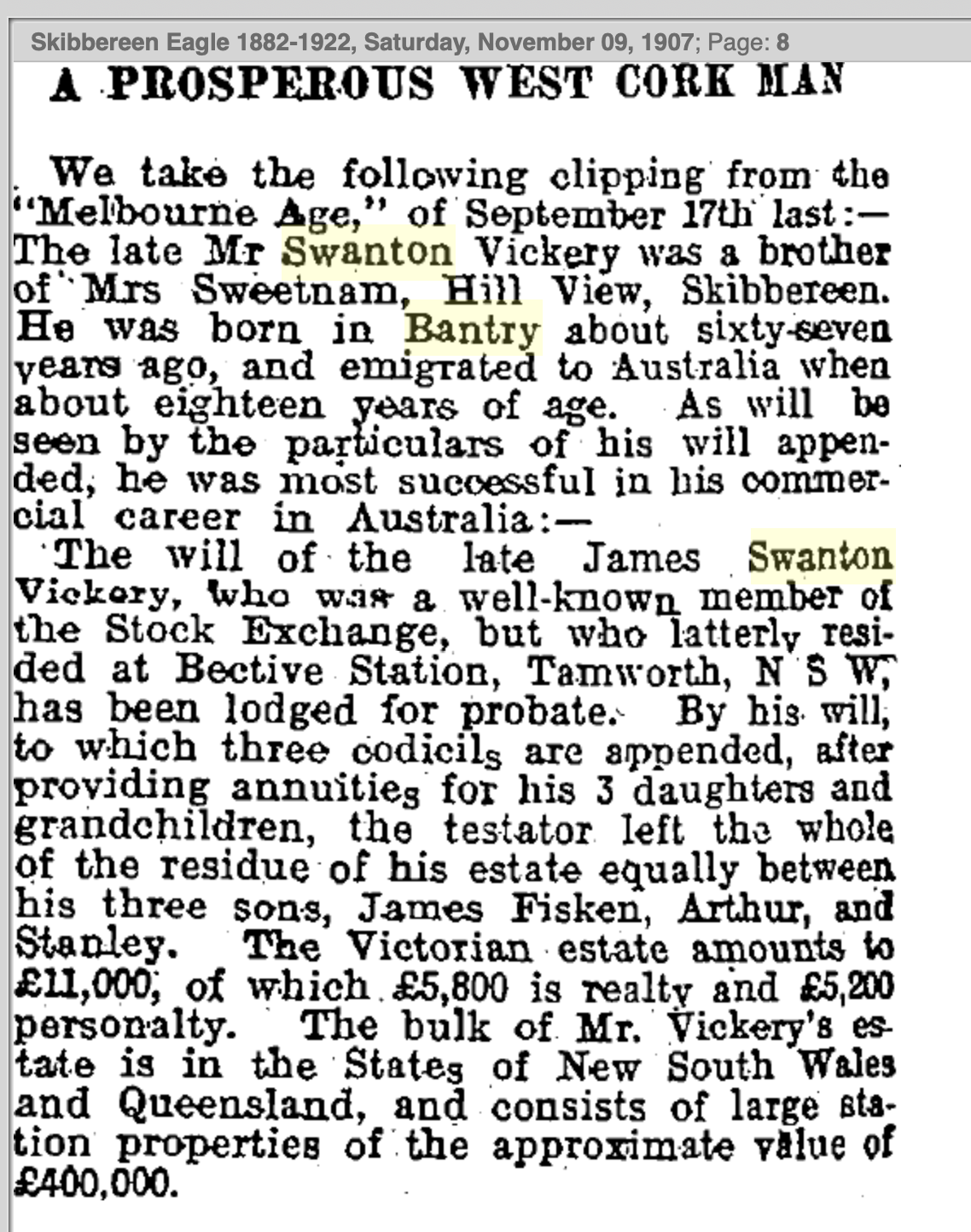