His West Cork Remote Cousins with a hot spot of descendants of Niall of The Niall Histges.  Possibly 5th century

Modern surnames tracing their ancestry back to Niall include (but are not limited to) (O’)Flynn, 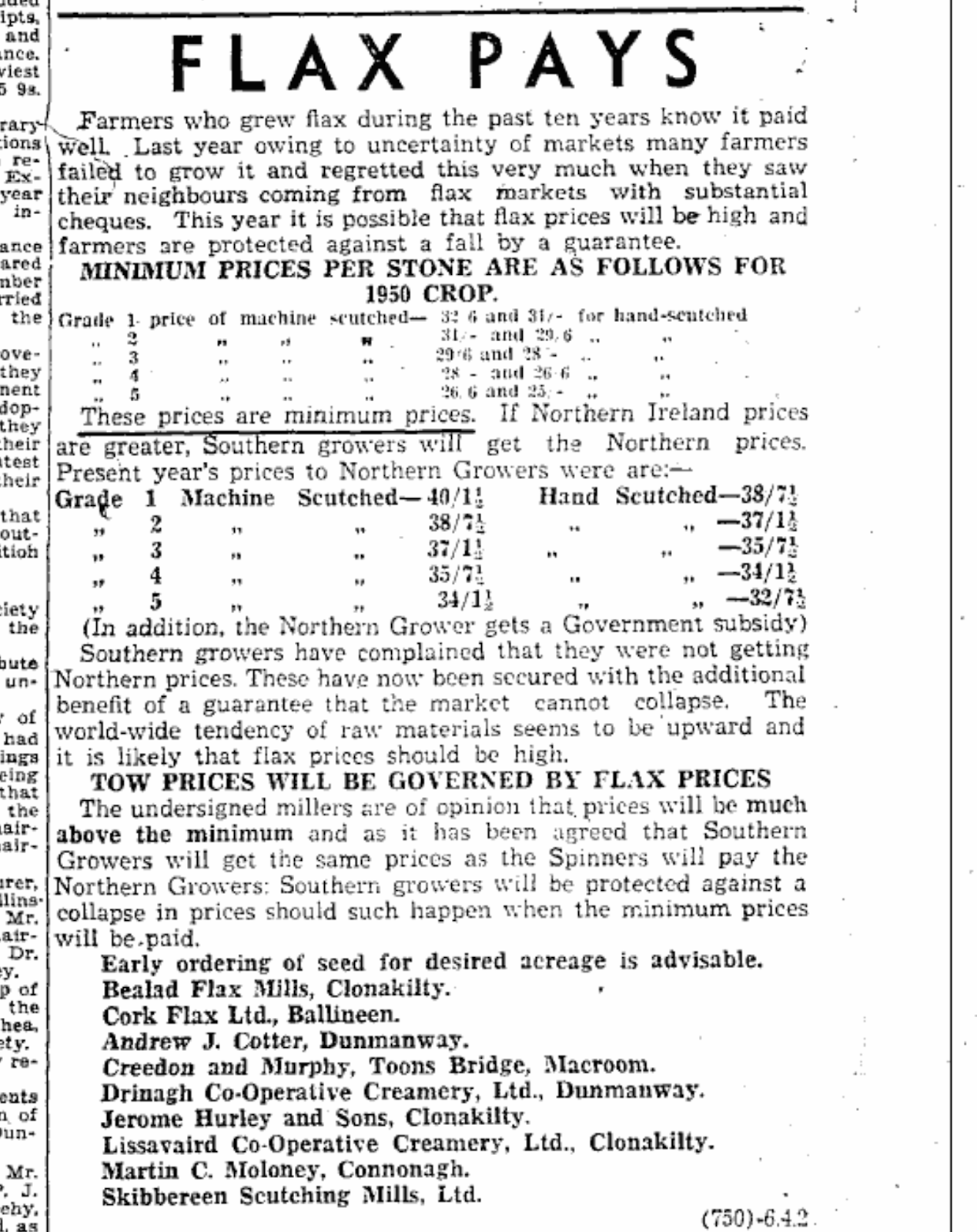 Working on the Bog. Ian Paisley Saving Turf in Tyrone

She was the daughter of Michael Gallwey Resident Magistrate of Abbeyfeale and her husband died in the Indian Mutiny after which she got the job of Governess to the Prince before he became King.

There is probably some confusion here as King Umberto was assinated in 1900 https://en.wikipedia.org/wiki/Umberto_I_of_Italy

This page has been accessed 448 times.

1. Year of birth and day of death given in ref 6 by courtesy of Aine Ni Chonaill as follows: “1884 April 3 Thursday: Poor Mrs Lee finally breathed her last this morning at 7.20 – attended to the end by the Marchioness and the Princess [ladies in waiting to the Queen] who spent the whole night at her bedside. I ,too [tutor], was present at the death and gave the news to His Majesty, the King, and the Prince”. 2. Info from ref 4 appears to be unreliable. 3. Marriage info from ref 3.

After her wedding she accompanied her husband to India with his regiment but the marriage was not a success due to religious disagreements. Her husband was killed in the Indian Mutiny but she survived by hiding in a fissure. She was fortunate in having friends who recommended her as a suitable person to be put in charge of the nursery of the Princess Margherita of Savoy, later Queen of Italy. From the day of birth of her son (in November 1869), the Prince was consigned completely to her charge and authority, and later as his Governess. He wrote to her every day until the day of her death from fever at the Royal Palace of Quirinal in Rome in the spring of 1884. “She was a woman of great judgement, in whom their Majesties placed the fullest reliance, and the admirable manner in which she trained the Prince ever met with their entire and grateful approval. During eleven years she never left the Prince and, since the appointment of his governor [three years earlier], she continued as a trusted friend and adviser to watch over all that regarded the health of her former charge, and to interest herself in every way possible in furtherance of his studies, especially in his favourite pursuit of collecting coins which illustrate Italian history” (ref 4). The funeral service was held at the parish church of SS Vincenzo and Ananasia a Trevi. The Royal household accompanied her coffin to her grave in the Campo Verano, the burial place of Italian Royalty (ref 2). She had two sons: Frederick Lee, and Michael Lee (d. young), ref 1.

2. Unidentified news paper cutting titled “A Prince’s Governess: Cork lady in Italian Royal household” written by Miss L O’Hanlon at the time that Vittorio Emaniele III was on the throne (1900-1946). 3. https://registers.nli.ie/registers/vtls000634898#page/48/mode/1up for marriage info 4. Limerick Chronicle 22 May 1884 obituary from the Rome correspondent of the Times. 5. Article by William White on Michael White as Ambassador to Rome in 1938 in Rosscarbery Past & Present, Vol 5, 2003. 6. La giovinezza di Vittorio Emanuele 111 nei documenti dell’ Archivio Osio, by Mario Bondioli Osio, published in Milan in 1998. The author is the grandson of the tutor, named Egidio Osio, appointed to the prince in 1881 when he was 11. On p.756, we see Elisabeth Lee (1835-1884) took up service at the birth of Victor Emmanuel in 1869.

Dennis Gallwey, Greenfield, Clonakilty, subscriber Dr. Daniel Donovan ‘History of Carbery, 1876. May be Denis McCarthy Gallivey, Greenfield, Clonakilty,  executor of the will of Rickard Donovan, Clerk of Crown d 1883, leaving £10,164.
Edward Gallwey, Skibbereen, , b. 1777, son of James  Gallwey of Skibbereen, b. 1750, merchant, had a lease for lives 1791, m. Mary and died ante 1809, convicted of smuggling at Cork Assizes 1821, and transported to Australia for seven years As a result of oppressive English legislation against Irish trade (including brewing) ‘high and low, Catholic and Protestant, were enlisted in a conspiracy to defeat Revenue officers’: Froude, Ire p. 500; O’Brien, Econ Hist Ire, pp. 18, 210. But for the influence of Lord Longueville, Governor of Co Cork, Michael Gallwey, the brewer, would have been convicted of smuggling. [In 2004 my colleague Prof Frank Hodnett of University of Limerick (from Clonakilty) talked to one of the O’Donoghues in Clonakilty about the Gallweys. His comment was “Smugglers, all of them” -TJG]). Appears to have been appointed Justice of the Peace in Sydney Jun 1827, May 1834 shipping agent in Sydney, Sydney Herald May 1841 notice of him as receiver of payments from the debtors of C Roberts, in Sydney Morning Herald, 31 July 1844, the death

Captain James Edward Galwey was born in 1781.1 He was the son of Edward Galwey and Jane Westropp.1 He married Marcella McEvoy, daughter of Christopher McEvoy.1 He died in January 1827.1  He gained the rank of Captain in the service of the 64th Regiment.1 He lived circa 1807 at Nadrid, Co. Cork, Ireland.1 He held the office of Justice of the Peace (J.P.).1

John Galwey of Lota `bred to the law and very eminent in his profession’ was admitted to Gray’s Inn 16 May 1668 and subsequently called to the Bar in Ireland.166  He was M.P. for Cork City in the Parliament of 1689 and a J.P. for the Co. and city, and was appointed a Commissioner for applotting tax for Co. Cork under King James II’s commission 10 April 1690.  For his adherence to the Jacobite cause he was outlawed in 1690 and his estates forfeited.  I have already related how his outlawry came to be reversed (17 June 1693), how he received a Royal Pardon (1 Aug. 1695), and how he got in and out of trouble with the Irish House of Commons in 1707 for taking young James Cotter to England.  He brought three claims before the Chichester House Commissioners in 1700, of which two were successful.  His will, dated 7 Feb. 1711, was proved 17 Feb. 1712/13.  He was bur. in the family vault at Rathcoonev 168  He m. 1674 (‘ marriage Articles of the Lord John Galwey ‘ were dated 14 Jan. 1674) Elizabeth, dau. of Col. William Meade of Ballintubber, Co. Cork, by Elizabeth, his wife, dau. of Sir Robert Travers. Elizabeth Meade was sister of Sir John Meade, 1st Bt. (grandfather of the 1st Earl of Clanwilliam).169  By her, John Galwey had with other issue,

Michael Galway, R.M., Kilkieran House, Clonakilty, 1861. 1840 petition on Catholic Equality.  Supporting Alexander O’Driscoll, J.P. suspended, Bandon 1841. Skibbereen 1847. Skibbereen 1847 distress meeting. Presentment sessions Ballydehob 1845 address Gortnascreena. Subscriber memorial John O’Hea J.P., Clonakilty 1847. 1846 with L. J. FLEMING, JOHN M. WRIXON, seeking relief for Ballydehob.   Gallwey, Margaret, Miss, ‘not 15 years of age’, dau Michael, Esq., J.P., Skibbereen, at Gurtnascreena, Skibbereen – (CE 3/9/1845)  Attending Railway meeting Drimoleague 1856.  Michael, b. 15 Jan 1803, RM West Cork (appears appointed 24 May 1848), ran a stage coach service Skibbereen to Cork, later at Abbeyfeale, Co Limerick, J.P. Co Cork. When MICHAEL GALWAY passed here, after his appointment as resident magistrate, his friends lighted tar-barrels for him, and the police were by, and did not notice it. RICHARD BEAMISH, when he gained a lawsuit against his brother-magistrates, his friends lighted tar-barrels and carried them through the streets; though the police saw them they did not interfere. This is called justice here.  He was said to have “some of the fine old characteristics of the real Irish gentleman, with a sympathetic knowledge of the condition of the country and 97 its people. He was a fine Gaelic scholar and speaker …” (Cork Examiner). He m. 25 Feb 1827 Ellen (d. 27 Jul 1863), dau of Daniel McCarthy of Gurtnascreeny, Co Cork. He d. 14 May 1866 (bur Templeglantine An inscription on his tomb reads ‘Ellen, who also reposes here, was the last of the McCarthy Reaghs’)

In Jan 1880 he became  Registrar of Births, Marriages and Deaths for Stanthorpe district, 188 Commissioner for Affidavits CPS Stanthorpe, May 1883 acting land agent for  Goondiwindi, July 1884 CPS at Dalby, Aug 1884 Registrar and Bailiff of Southern 140  District Court, Aug 1889 CPS at Ipswich [vice F W Gallwey; who was he?, h  appeared again in

Neal Arthur Galwey, 1875 died Patrick St.  Does not appear on lists but is described in 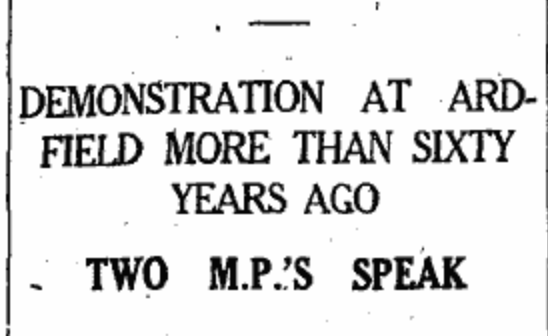 Very active in the Land War jailed a few times

Collections for Evicted Tenants, Castlehaven/Myross, Myross, Ardfield, Rathbarry. 1892 Collection Ballyroe. 1893, Clonakilty Evicted Tenants Fund. Like a Mini Census. Fiery address of James Gilhooley, M.P., in Goleen on Evictions. Gilhooley ‘The Irish People Have Never Acknowledged this Right of Any Nation In the World To Govern Them.


Timothy Casey McCarthy at 35 years old was the oldest man who fought at the Kilmichael ambush 20/11/1920. 1949 his friend Dick Gay, Building Contractor. Trouble with the Kinsale Unions

Timothy Casey McCarthy at 35 years old was the oldest man who fought at the Kilmichael ambush 20/11/1920. After the ambush he was `on the run` but the British army found Timothy out he was there and called to his parent’s home in Coulculloghta, Durrus to capture him accompanied by a local RIC man. They were about to shoot his parents for harbouring a `murderer` when the RIC man spoke and said `these people are Caseys and its McCarthy you are looking for` and the old pair was saved and Tim was known as Casey afterwards.  Timothy ‘Casey’ McCarthy, Coolculaghta, (Captain of Durrus Company IRA) took part in the Kilmichael Ambush with General Tom Barry.  He worked for 40 years with Dick Gay, Carrigaline (the Gays were from nearby Droumreagh), died December 1956 firing party old IRA under Captain Raphy P. Keyes rendered military honours at the graveside.   Members included Mortimer O’Sullivan, John Keohane, Jack McCarthy, Jack Wholihan. In attendance were Tom Barry, Ned Cotter TD., Dick Gay, Senator Ted O’Sullivan attended removal from St. Finbarr’s hospital.  Dick Gay was building contractor and in the 1940s got a contract to build local authority houses in Kinsale.  He faced down the Kinsale unions who blacked his site as he insisted on employing his own men.   Dick Gay may have served an informal apprenteship with  either Timothy McCarthy or his father.

Re Peadar Ó hAnnracháin. Peadar was a wonderful Conradh na Gaeilge organiser throughout a number of counties including Cork and he wrote several books as Gaeilge. He also wrote on the Southern Star as ‘Cois Life’ in the 1940s and 1950s. In that period he worked in the Pigs and Bacon Commission in Dublin.  The column often wandered over long lost history, family relationships and there was a touch of the ‘Seanachaí’ about them.  The daughter of the Gaelic Scholar, landowner and businessman in Ballydehob Thomas Swanton, Crianlarich, gave him her father’s papers. 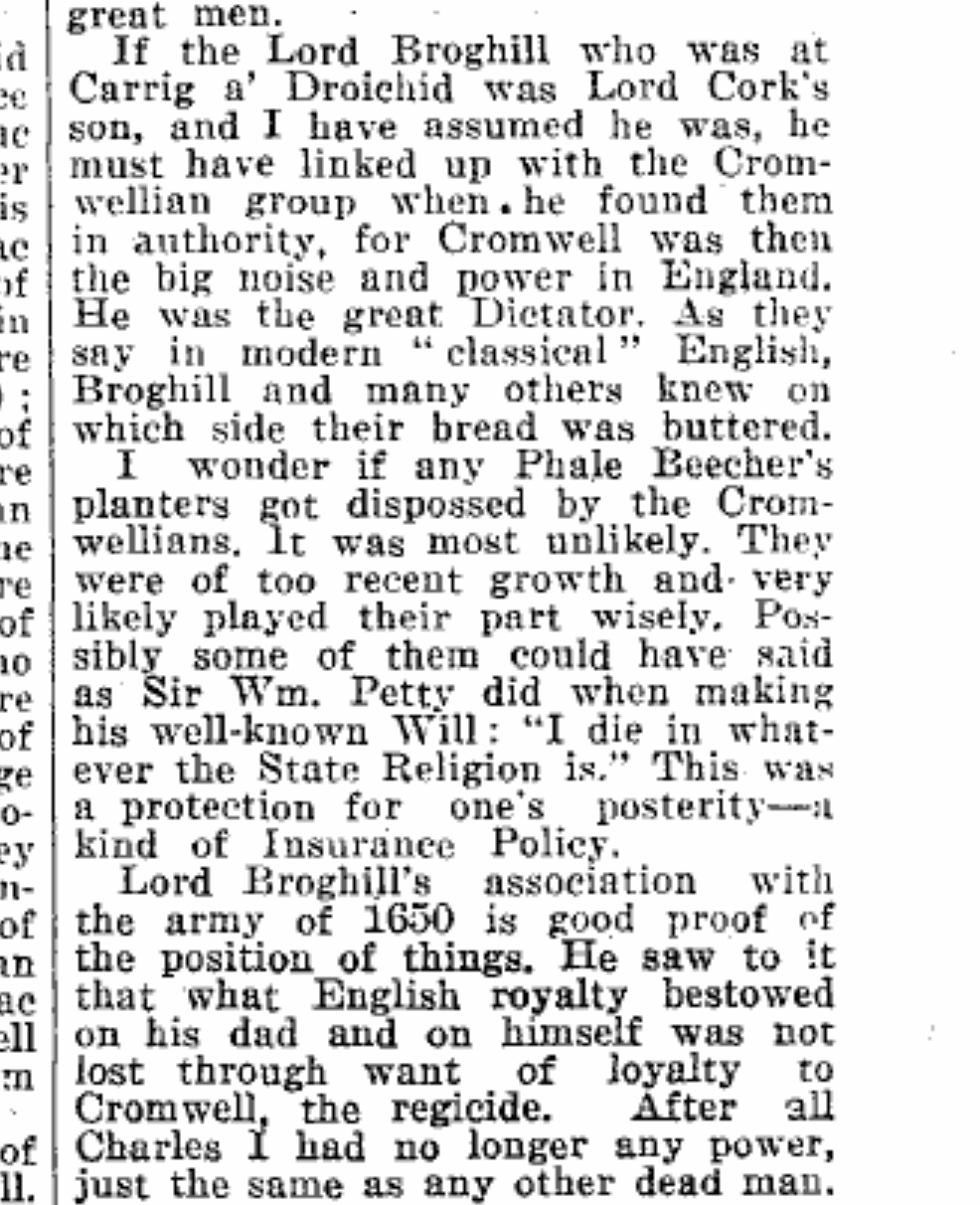 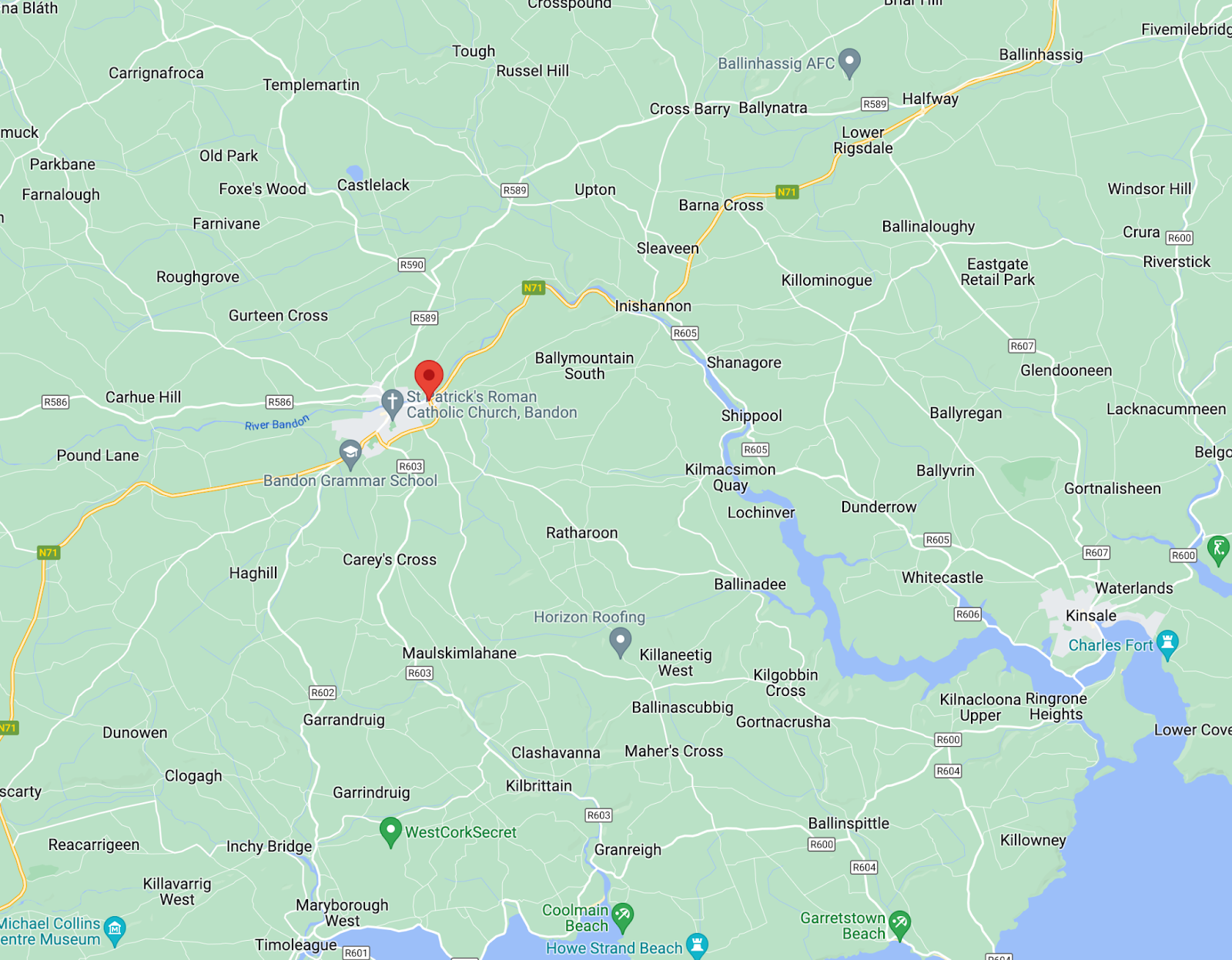 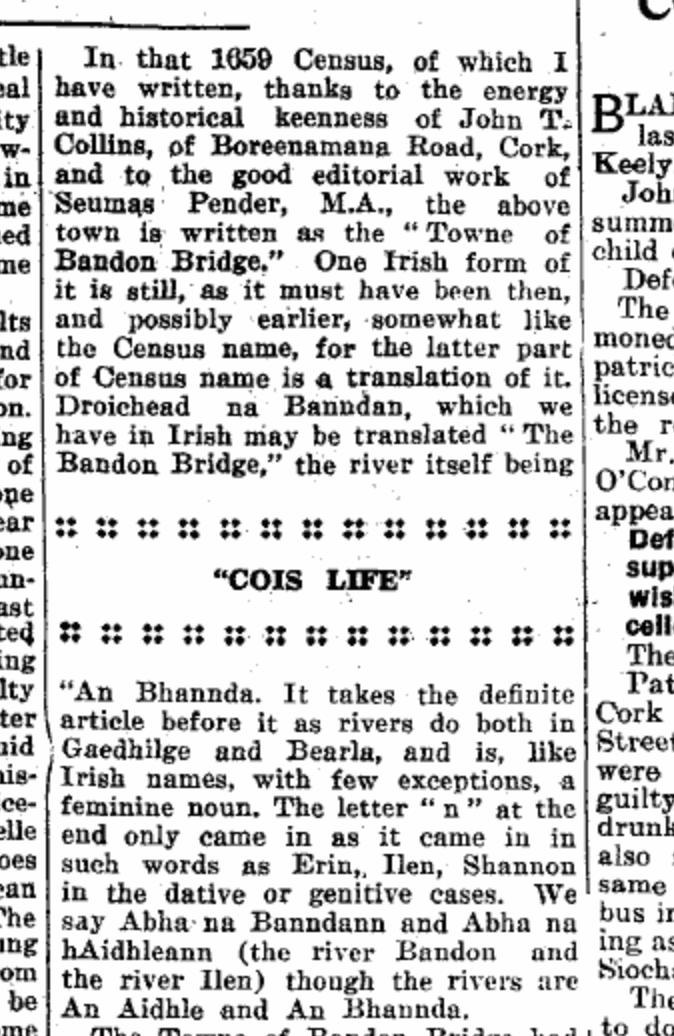 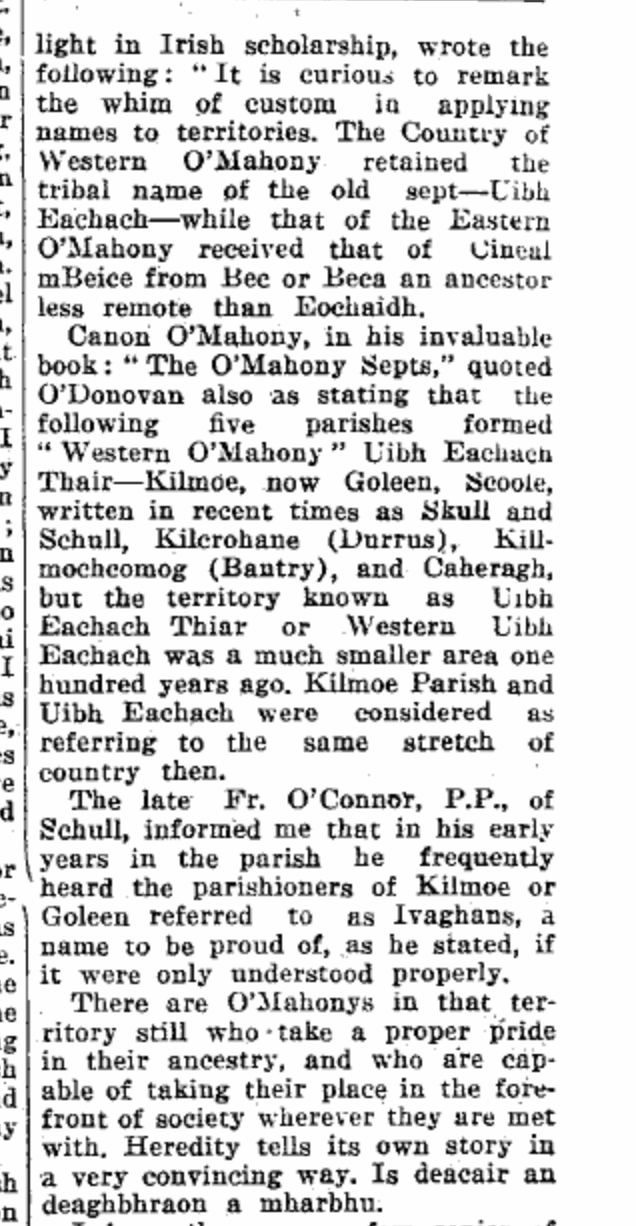 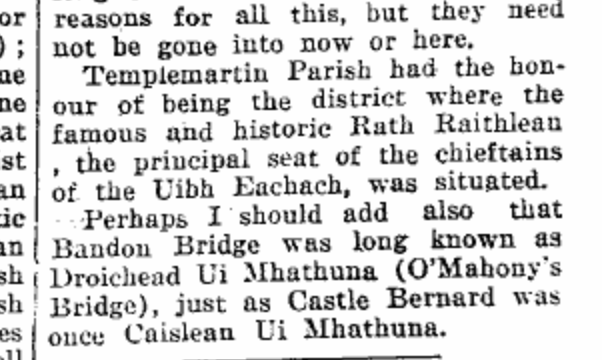 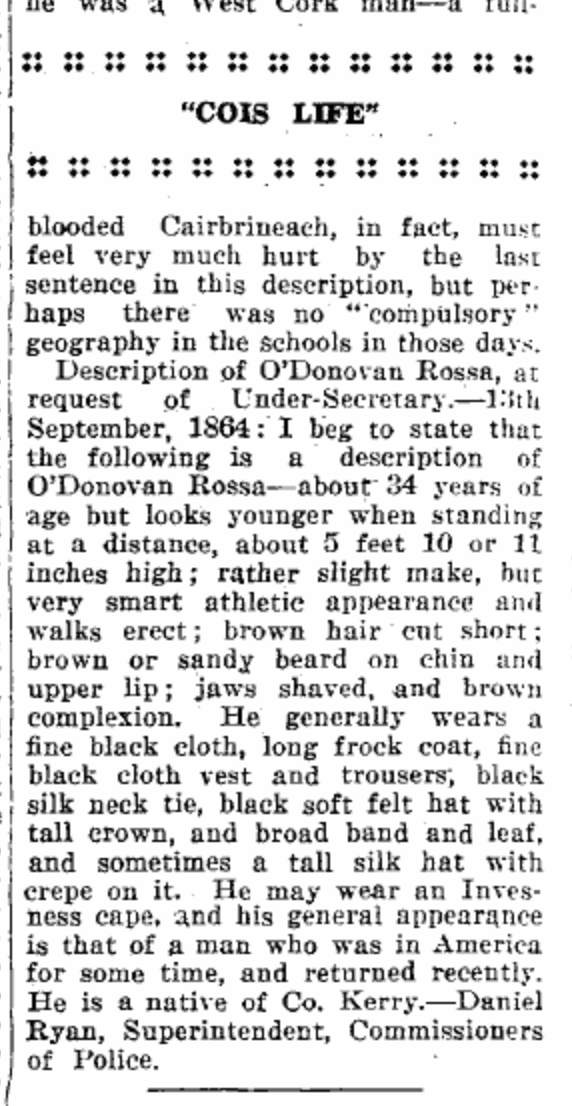 The Catholic `swantons of Kilcrohane adn Casper Wyoming descedn from a Ballydehob Mining Captain working on the Kilcrohane mines. He married a local woman. According to family tradition he continuet to worship at St.James in Durrus but the children were brought up as Catholics.


O’Driscoll Properties, Three Ploughlands in the 1630s from a Schedule of 1850 of The O’Donovan

The enclosed in a number of articles by Peadar O hAnracháin, in the Souther Star from thr mid 1940s his ‘Dublin Letter’ 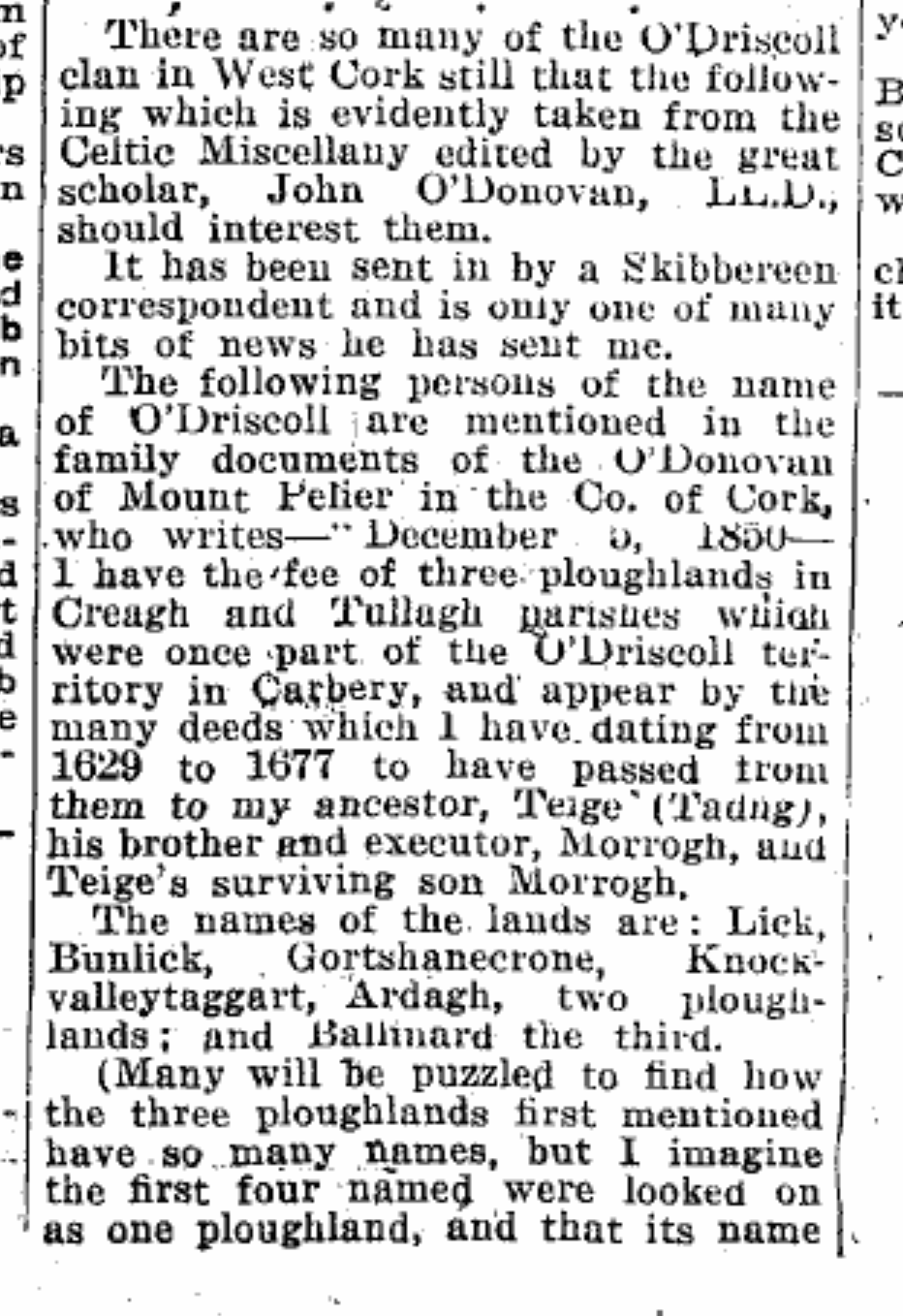