By way of background it might be remembered tht the Economic War with Britain was raging at the time and the was widespread distress.


1934 Deasys Stout, Clonakilty, Out of 818 Entries at the Brewers Exhibition London in Deasys secured 2 Prizes. 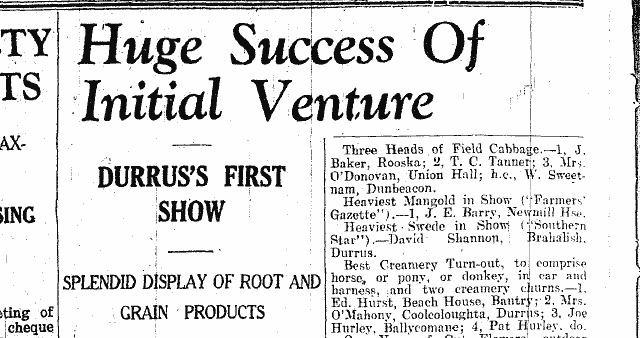 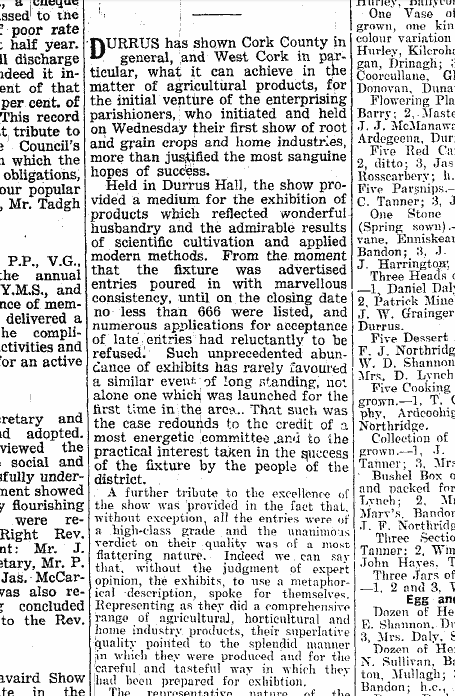 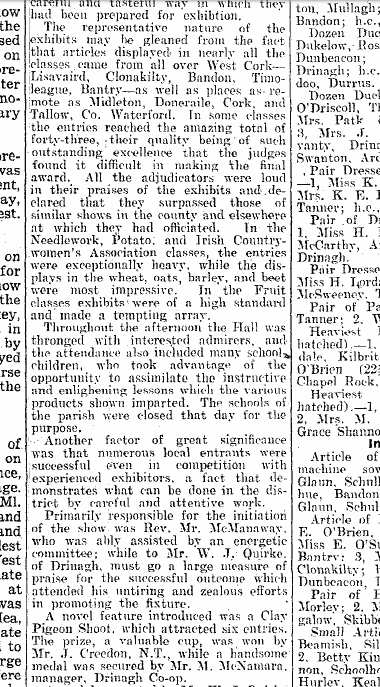 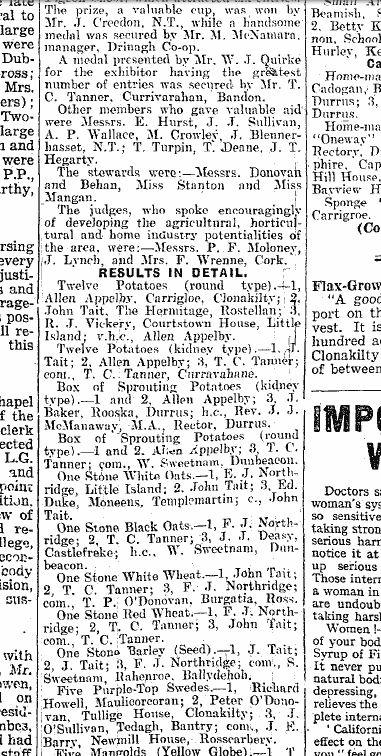 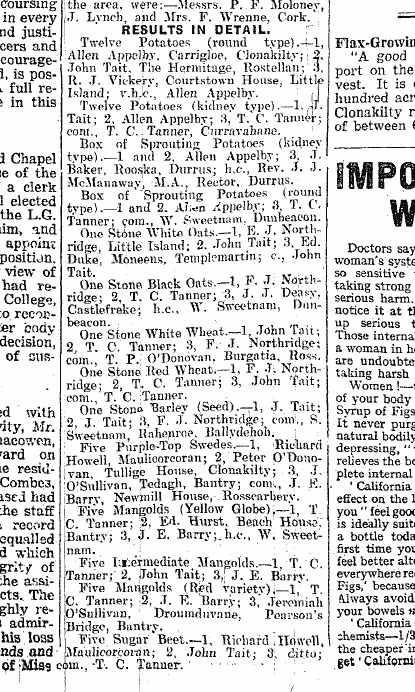 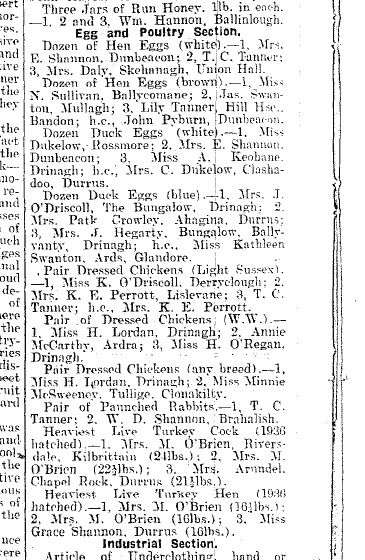 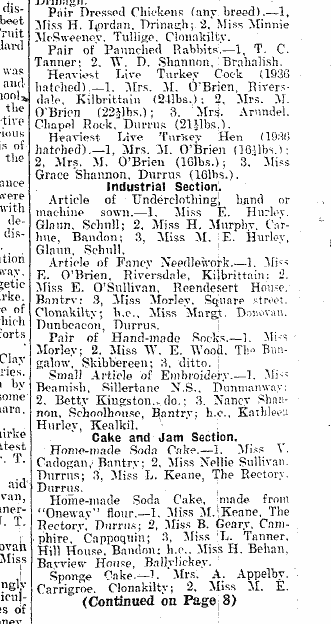 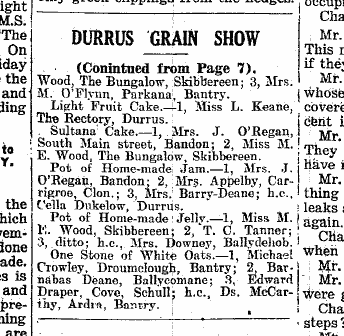 One of the features is that people in other parts of Co. Cork exhibed many with links to the area such as the Vickeries of Little Island who have Durrus/Bantry connections.

Held in the vicinity of school.

One of the features is that people in other parts of Co. Cork exhibed many with links to the area such as the Vickeries of Little Island who have Durrus/Bantry connections.

Held in the vicinity of school.

Centre Canon McManaway a driving force in getting the creamery established, the new road over the hill from Coomkeen to Bantry, the first Church of Ireland School at Ahagouna in the Free State

Tom Deane, tall at back, former Dublin Metropolitan Police, Crottees he was so tall the Police had to have a special bicycle made for him.  Community activist, member Church of Ireland Diocesan Synod. 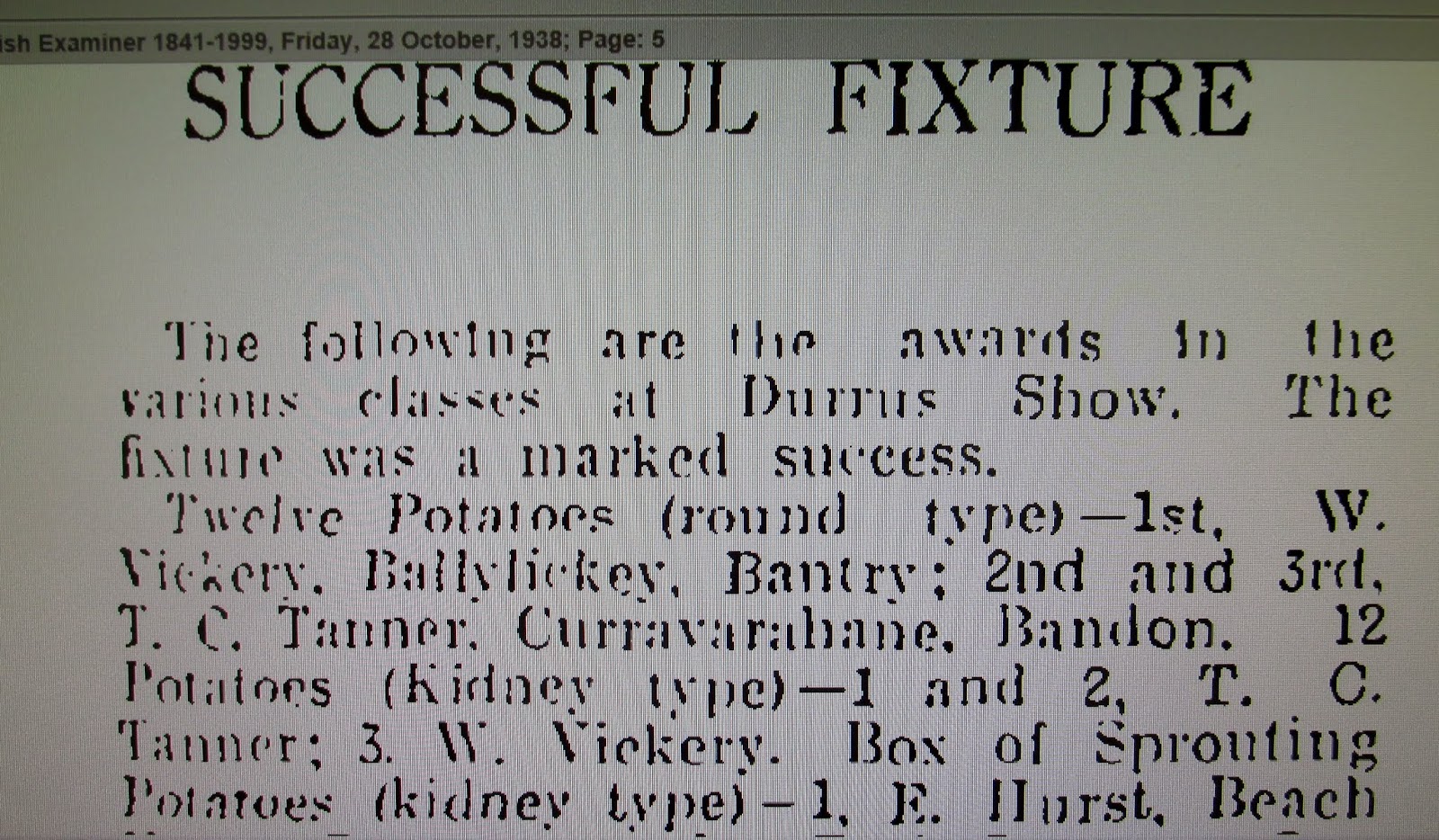 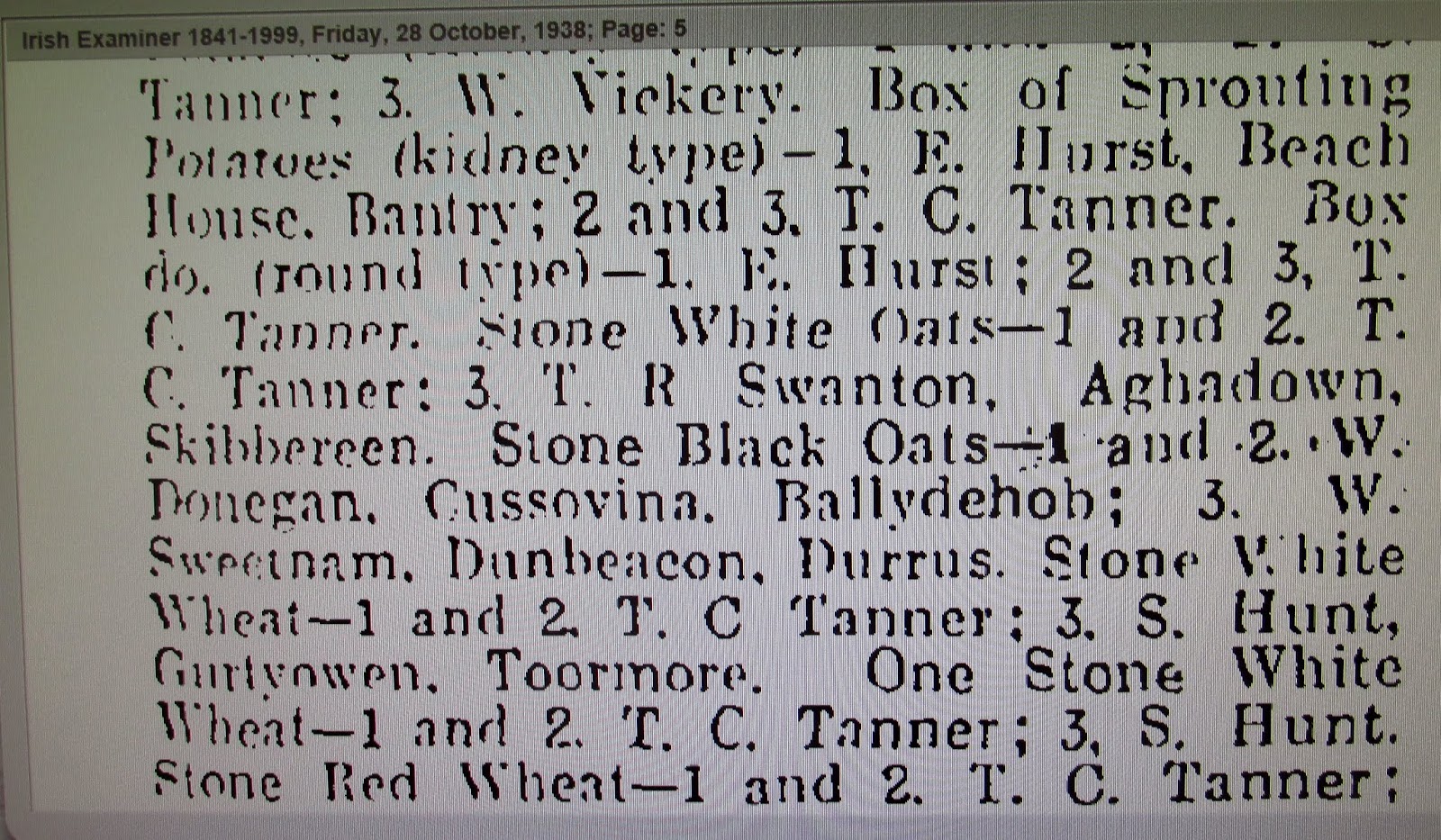 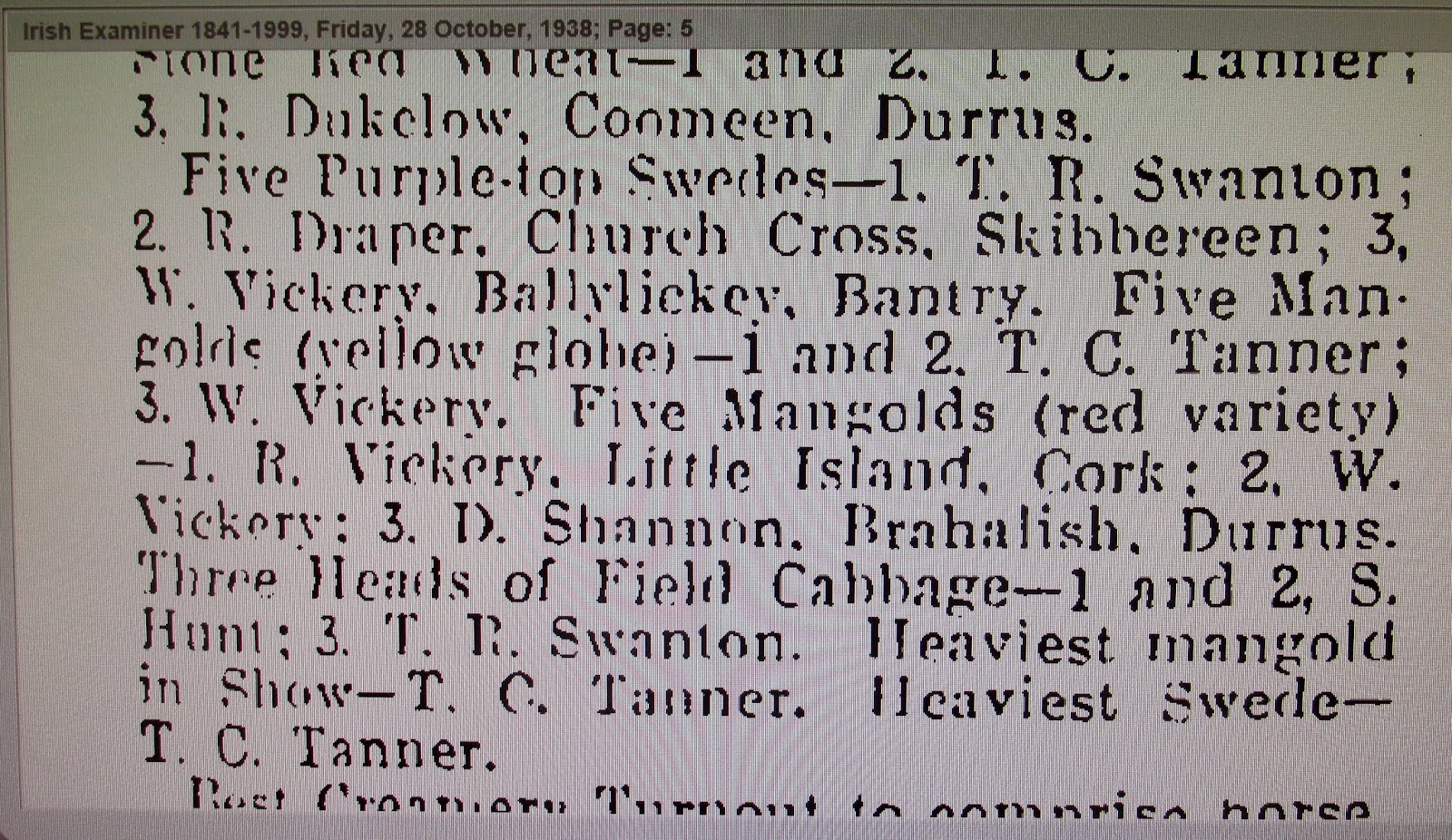 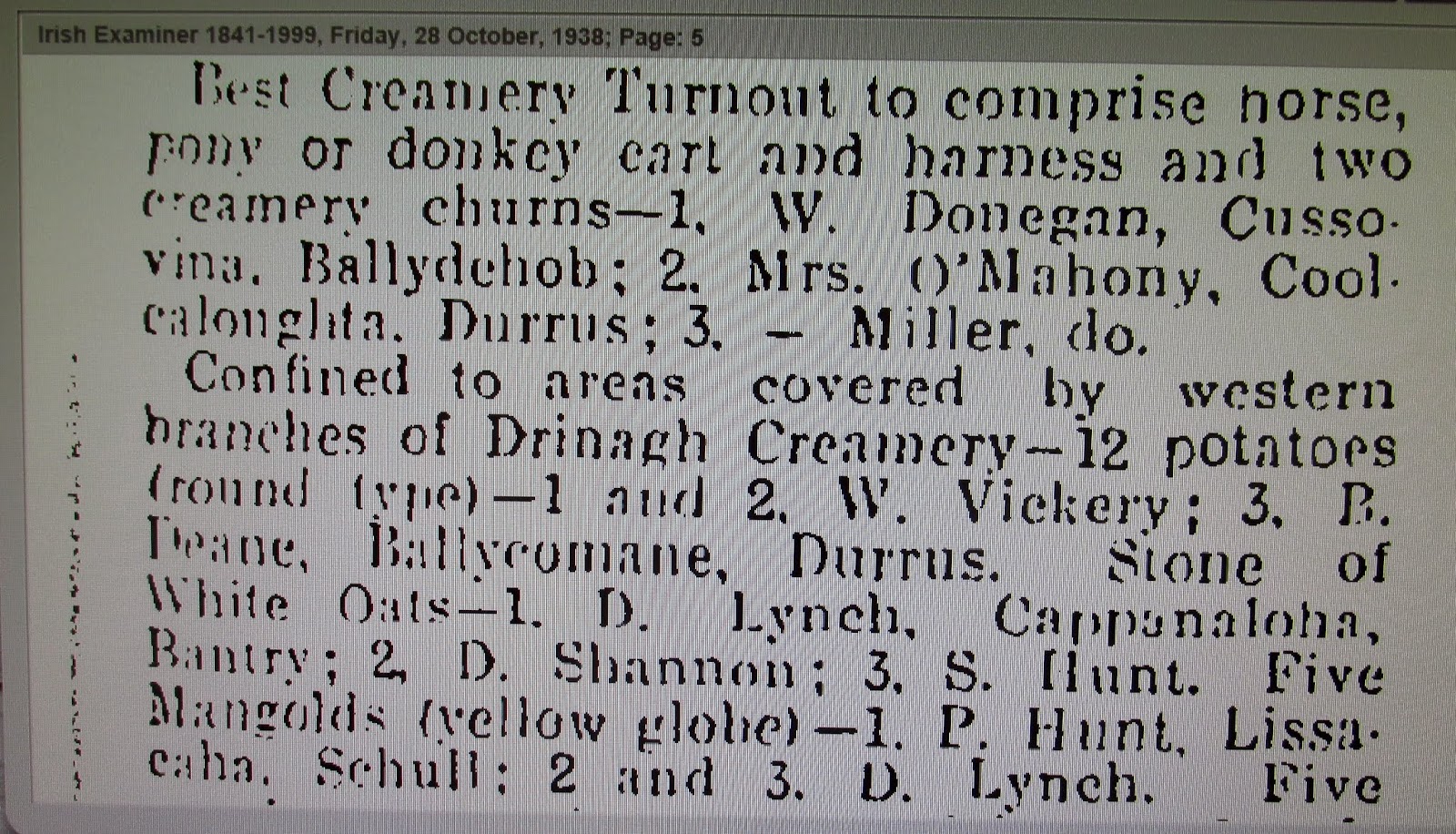 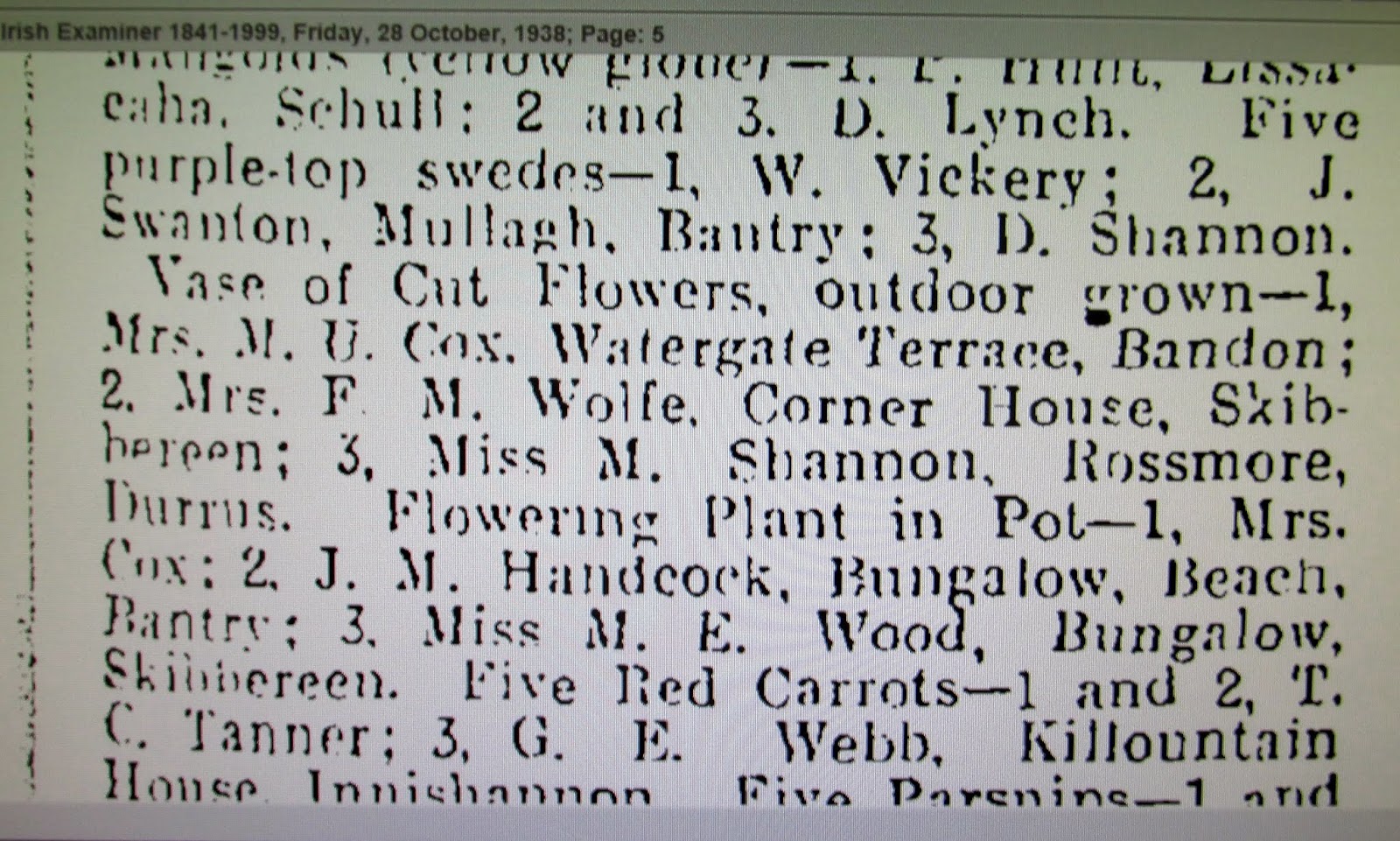 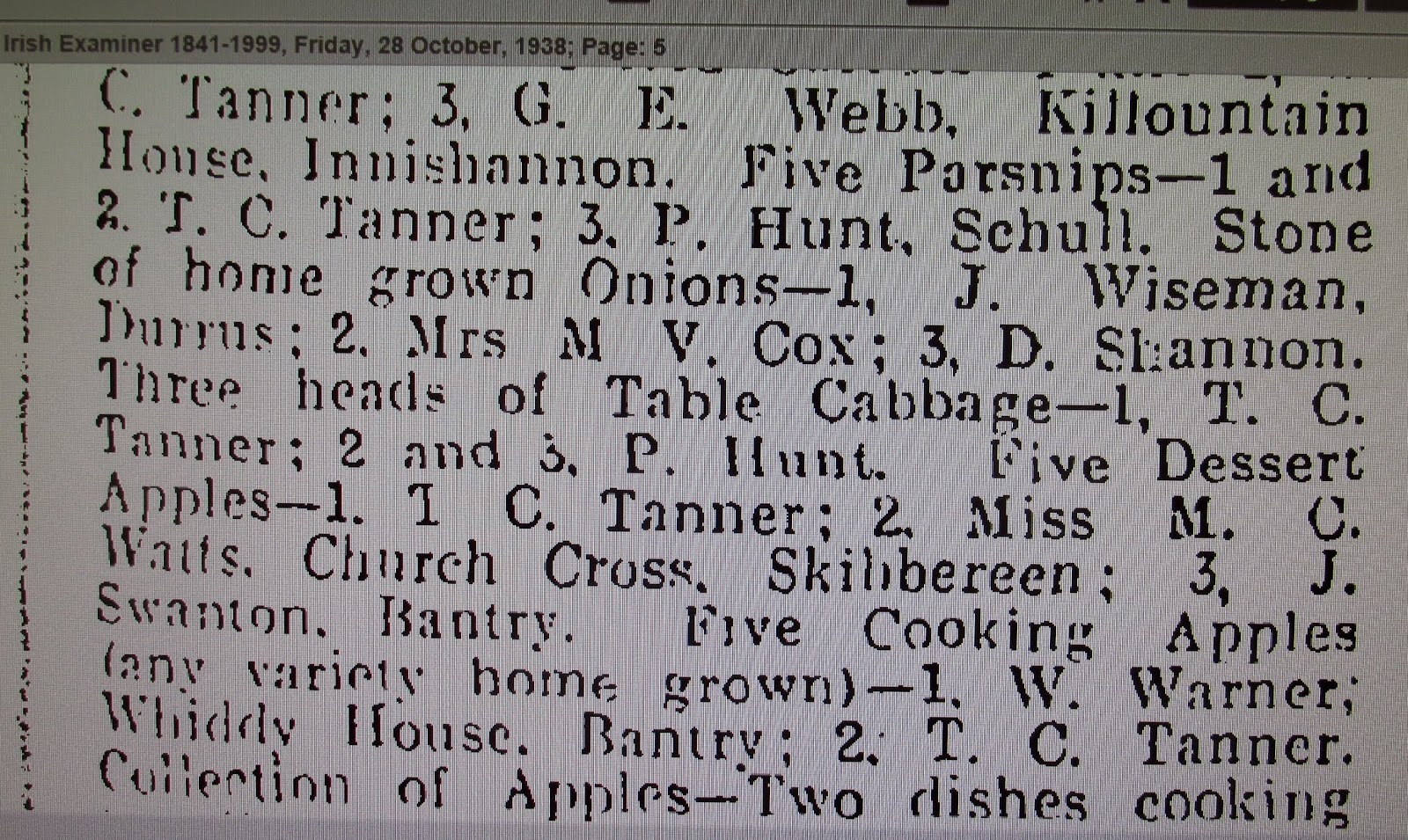 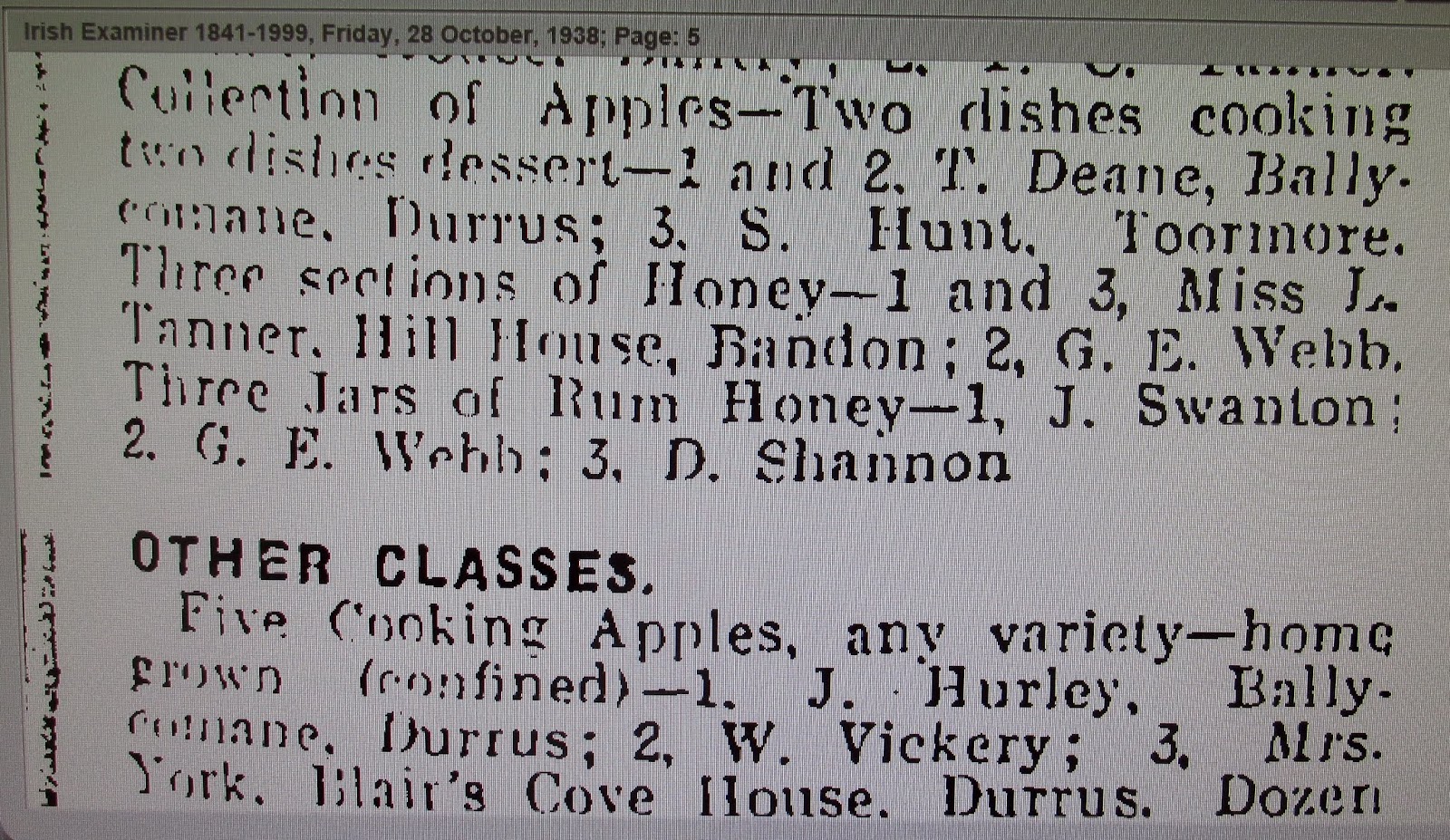 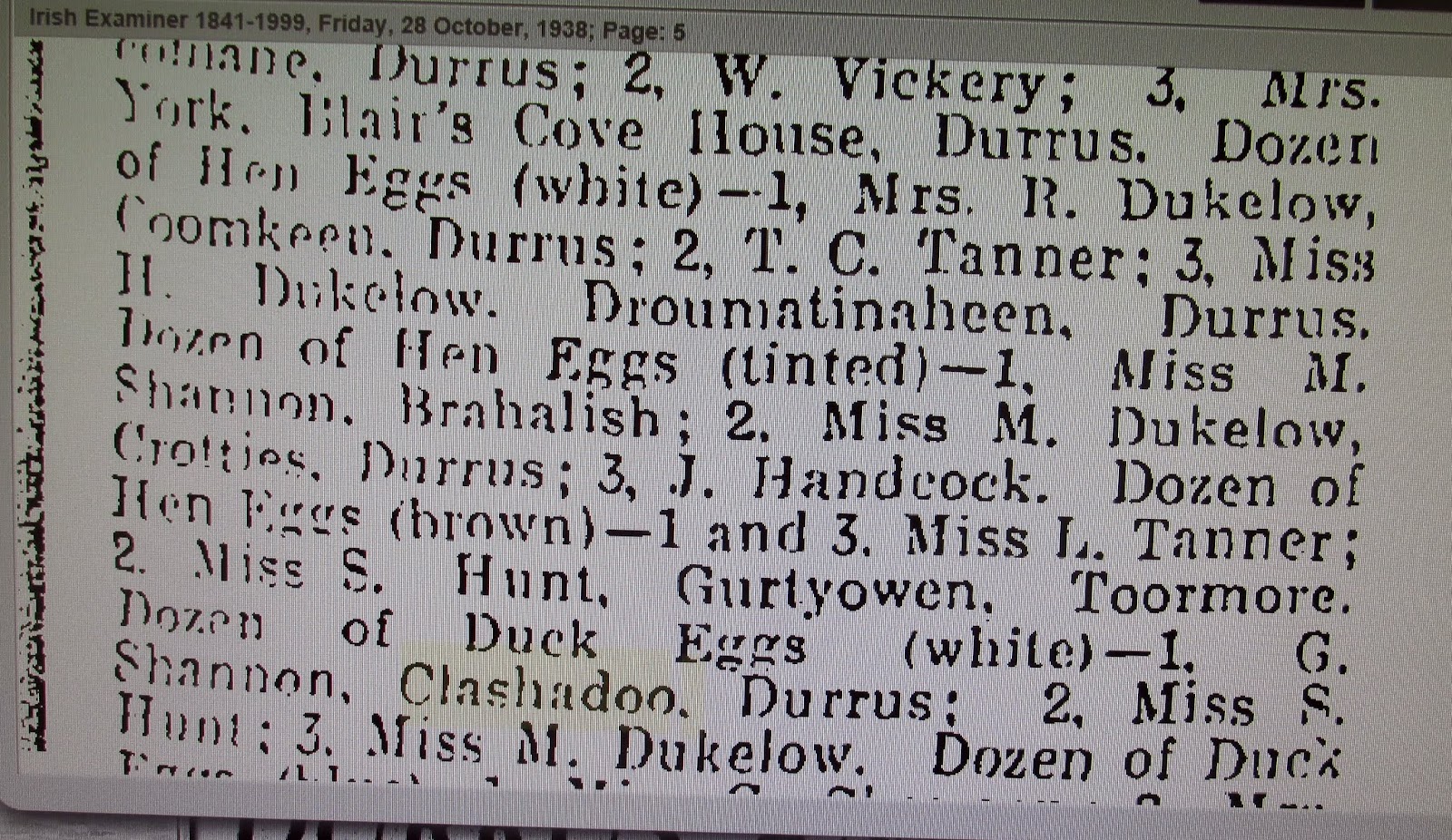 
All comments welcome. Part of the reason a small area pre the Irish Famine 1845-7 had one of the world’s highest rural population densities was the availability of marine resources, sea sand, seaweed. As early as 1820 there were favourable comment by (Kerry born), Dublin Attorney Orpen at how developed West Cork was with shipping to Spain, Portugal, France, roads, harbours. He was related to local families such as the Durrus Hutchinsons, landlords, Swanton of Ballydehob and indirectly to the O’Sullivans of Ballaghadown, Caheragh. William Orpen is of this family.

Index to Journal of Cork Historical And Archaeological Society reference to pilchards, p.302

In 1912, Willie’s cousins, Herbert & Tommie Vickery, sons of George J. Vickery, of Vickery’s Hardware Shop,opened a motor repair garage behind the hotel. As they were Ford dealers, they needed a showroom on the street. This was in the new hotel building between the front door and the archway, with petrol pumps on the footpath. The hotel was used by the Cork Ford Company for regional meetings and Henry Ford, his wife Clara and daughter stayed in the hotel on the night of the 10th August 1912.

Corktown, Detroit, Michigan being Revitalised by Henry Ford The Third.

Famous Visitors to the Hotel:

Noel O’Sullivan a porter in 1940 wrote that he remembered opening the door for the then, Taoiseach, Eamon de Valera; General Tom Barry; Dan Breen, Eoin O’Neill, Dr Noel Browne, the singer Delia Murphy and actresses
Kathleen Ryan and Hermione Badderly. In 1961, during the making of the film “I Thank a Fool” on the Mizen Head Peter Finch stayed with his wife Yolande. Susan Hayward and Diane Cliento who were starring in the same film were regular clients for meals at that time. Trevor Howard, Cyril Cusack and Geraldine Plunkett (Glenroe) visited when making a film in Baltimore. Trevor was so pleased with one of the photos of him taken by Ian that he ordered 100 copies to use as a publicity photograph. Maureen O’Hara and her husband Charles Blair stayed when looking for property in the area which they eventually found in Glengarriff. She became a regular client as was Christy Moore when he had a house in Durrus – much to excitement of the staff. Before the private sitting-room/guest lounge became
the dining room I have fond memories of great sing-songs with various friends and guests playing the baby grand piano which had come from Elsie and Ian’s home in Reenmeen, Glengarriff after it was sold. Pianists included Donal Crosbie of the Cork Examiner family, Joe Lynch (Dinny in Glenroe), Maureen Potter and Jimmy O’Dea who stayed when they were staging their revues in the Parochial Hall. Later the old bar became the venue for the Young Musicians’ Platform during the West Cork Chamber Music Festival until they outgrew the room.