From 1590 West Cork experienced very substantial inward migration marking it out as different then most parts of Ireland excepting Dublin, Cork and some of the Northern Counties. Allied to that at 1840 it had one of the world’s largest rural population density. Massive emigration from the 1810 means that many worldwide have connections. DNA testing is now showing that a person’s religion or surname only partly explains their complex genetic inheritance.

There was traffic also in the other direction. In the late 1830s the Rev. Fisher of Toormore/Altar said that formerly a large area of Crookhaven was known as ‘Protestant Hill’ but they had gone over to the Church of Rome and had become what he said were ‘Bitter Romanists’

Son of Richard and daughter of the Knight of Kerry. ‘The O’Donovan’ the head of the Clan married firstly Miss Anne Kearney, Garretstown, for the second time who in his 60s Jane Beecher aged 15/16 and had a second large family. He renamed the Bawnlahan Estate Castle Jane.

Renunciation after first marriage and The Kearneys of Garretstown House also renounced relations the Franks, Rochfords. 49 years before his death.

His son Lieutenant General Richard O’Donovan, married Miss Powell from Wales, they had no children the estate passed to her nephew. The title of Chieftain ‘The O’Donovan’ passed to the Montpelier (Douglas) Cork branch.

..
From, at the end there is a searchable index : 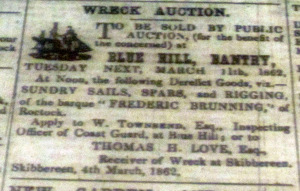 1763, Casks of Madeira Wine and Boxes of Fruit from Shipwreck, Bantry Bay. 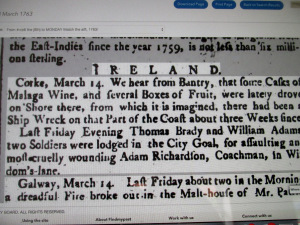 December 1807, ‘Good Rech’, of Pool (Poole), Shipwrecked off Crookhaven, Co. Cork, with Loss of Seven Lives, En Route from Newfoundland with a Cargo of Oil and Dried Fish to Messrs Penrose, Waterford (Family who Founded Waterford Glass) Some of the Cargo Exciting The Brutal Rapacity of the Surrounding Multitude.

The Waterford Penrose family were Quakers related to the Cork Penrose/Fitzgerald family. They were active 18th century developers of Cork, Shipping Merchants whose property straddled the North Main Street area and the location of the present railway station. 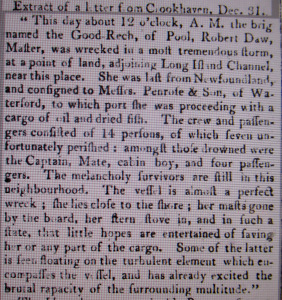 ‘Big’ Patrick O’Sullivan, Millcove: Castletownbere. Died 1863.  Lord Bantry Estate appointed as Seneschal   Not legally qualified.  Parliamentary Report 1837, Eppi.  Baronial collector since 1825 deputy Denis Murphy (Irish speaking) as collector.  Appointed fit and proper person to conduct 1831 Census with Mr. W. Murphy.  Seneschal of Altham, Mill Cove, Berehaven, Bantry and Donemark from 1843.  1841 organising voters from Beara in Conservative interest.  Sitting as Grand Juror, Cork 1842, 1844, Cork County Agriculture Society Dinner 1842.  Distributing  in Beara  New England Famine Relief 1847. Millcove. leased by Patrick O’Sullivan from the Earl of Bantry’s estate in 1852 when it was valued at £14. O’Sullivan worked as an agent for the White estate.  A deeply unpopular Landlord local tradition has it that he used to blow his bugle outside the Church…

Thanks to David Coffey, Melifont descendant.

From Dr. Elizabeth Fitzpatrick on the Bardic School.

Deeds from Registry of Deeds project:

In a series of deeds transcribed by Ron Price the Woulfes appear, for the first time to my knowledge in the Durrus area.  David, Merchant, Four Mile Water (Durrus), Robert Woulfe, Merchant, Dublin, later in 1737 David wife appears with a clerk John Flanagan. Other names are Robert Winspear who is a farmer in nearby Rossmore but described as Gentleman aged 45 in 1727 (born 1682). The Winispeares are shipwrights in Bantry since around 1630. A Winispeare Toye appears in Clonakilty around 1810.  Richard Coppinger Gent appears 1737 as does Andrew Beazley. A lot of the old Cork Merchant families are in the Bantry area early 18th century as merchants in connection with the pilchards.

There are Beasleys in Cork early 19th century coopers. They are related to the Harris family.  The Harris are married into Evenson family mid 18th century with a base in Four Mile Water related to Harris medical family in Cork.

Abstract made by: Halifax

The record of Bishop Dives Downs’ visits to Bantry in 1699 referred to ‘a lack of pilchards’.  In an article by the Archbishop of Dublin in the 1726 Edition of ‘Boates Natural History’ it was stated that prior to 1688 there was good fishing of pilchards in the South coast, but since the fight in Bantry Bay the pilchards have not been seen on the coast.  There is however reference in 1735 by Mr. Jenkins, giving evidence before a Commission on the state of Irish fisheries. He had seen the books of Mr. Meade who was involved in the fisheries in Bantry Bay from 1730 to 1745, and exported enormous quantities of pilchards. In 1749 Meade of Bantry obtained a premium from the Royal Dublin Society for having caught and cured 380,000 fish.  Horatio Townsend 1810 writes of the disappearance of the pilchards and the gradual disappearance of herring and sprats. He says that by Smith’s time 1750 the pilchards had disappeared.