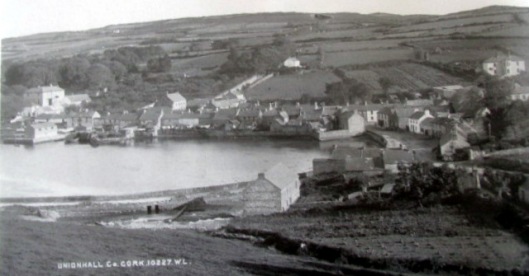 The Limrick house is the large one to the left in the 1900 Lawrence photo.

The East Company recruited for their Army and Navy well into West Cork  There are references to recruits from the most remote townland from Beara from c 1760.  The Skuse family of Clashadoo Durrus and Deerrynafulla, Ballydehob is descended from an ancestor born in India the father presumably from Glengariff serving as a soldier in the service of the East India Company.

John Limrick, Esq., (1812-1890), 1860, Union Hall, 2nd son of Captain William Somerville Limrick who died 1831, Union Hall, patron Masonic concert, Skibbereen, 1862, sitting Skibbereen 1850, subscriber Dr. Daniel Donovan ‘History of Carbery, 1876. 1870 return, 8,181 acres. Some of his wealth came from his father who, having probably served with Arthur Wellesley (Wellington) at the battle of Seringapatam in 1799, gained a substantial amount of prize money in India. The prize money after Seringapatam was over £1M distributed among the victors. Col. Limrick then became a member of the East India Company on his retirement, maintaining a London address.  Col. Limrick’s brother, Rev Paul Limrick, garrison chaplain at Fort William in Calcutta, is also believed to have owned considerable property in India. I guess that family connections to the Sullivans  (Benjamin Sullivan Cork Attorney self styled Ó Sullivan Mór kinsman to Laurence Sullivan, Chairman East India Company) would have helped.  It  assumed John Limrick’s daughter Lucy inherited his estate which then passed onto the Spaight family.    Executor of brother Dr. William Limrick 1869, £3,000.  Probate  1890 to William Tower Townsend JP, Myross Wood, effects £3,647.