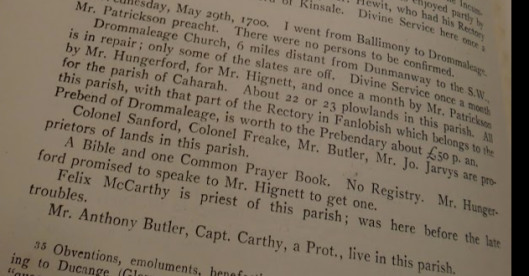 Morgan Donovan is one of the O’Donovans, Mountpelier (Douglas, Cork) acquired through Ronayne marriage who converted to the Church of Ireland some of  whose descendants became ‘The O’Donovan’ though disputed among other branches.  This branch of the O’Donovans originated in Union Hall.  On the death without issue of Lieutenant General O’Donovan of Bawnlahan (Myross) early 19th century the Chieftainship passed to this branch i.e. the tithe ‘The O’Donovan’.  In the 19th century there was a marriage between the Ronaynes and Evans of Caheragh, both are buried in old Caheragh graveyard.  Possibly the magistrate:

He holds Lisangle in Caheragh.  One of the families there were the Evans one of whom Rachel married 1805 James Crowley, probably from Ballyourane, an Apothecary in North St., Skibbereen and a brother of ‘Dr’ Jerry Crowley also an Apothecary of North St.

The Tonsons are descendants of Sir Richard Hull of Leamcon Manor, Schull.  later they lived outside Fermoy.

Tim Donovan is the ancestor  of Timothy O’Donovan, Richard O’Donovan and Dr. Daniel O’Donovan, all Magistrates,  of O’Donovan’s Cove, Durrus Timothy is buried in the old Caheragh churchyard.  According to tradition the rents for Caheragh were received by the the O’Donovans at The Cove in gold sovereigns al all washed in boiling water.

The Kingstons became one of the most numerous families in the area with Church of Ireland, Methodist and Catholic branches.

Harris/Daniel connection, The Harris family are also in Durrus 18th century possibly linked to the Evansons: