Notes on the Movement of the French Fleet in Bantry Bay and Panic in Bantry on Friday the 23rd December 1796, the women seek asylum in Bandon or Cork or to the Kerry Hills from a contemporaneous note by Edward Morgan. 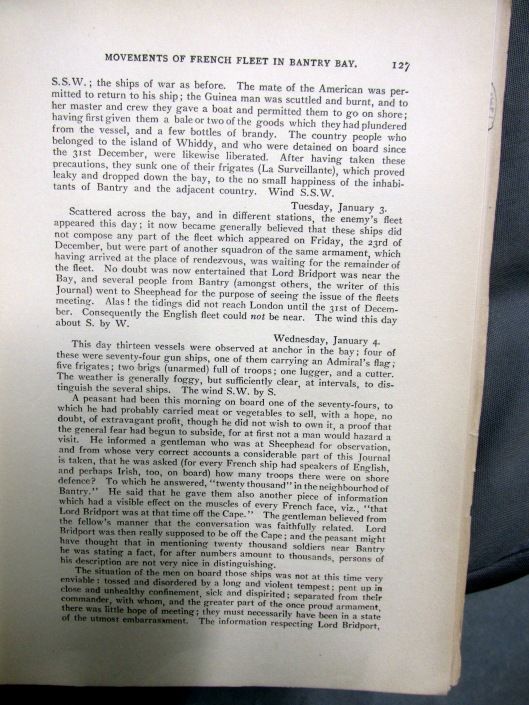 Across Bantry Bay, in the early 19th century Timothy O’Donovan, of O’Donovan’s Cove was growing exotics such as grapes and pineapples

Deaths (includes transcriptions from Old Bantry Graveyard done by Hazel Vickery), some families used the old graveyard in Bnatry in the 20th century. Some outlyingfamilies probably used Moulivard in the townland of Ballycomane, Durrus. The late Bnatry Historial Paddy O’Keeffe commissioned an engineering survey f the then overgrown graveyard in 1955 and commenced its restoration:

There are two rent books relating to the Bantry Estate in the National Archives, Dublin, Ref. MS. 4944 and 4945 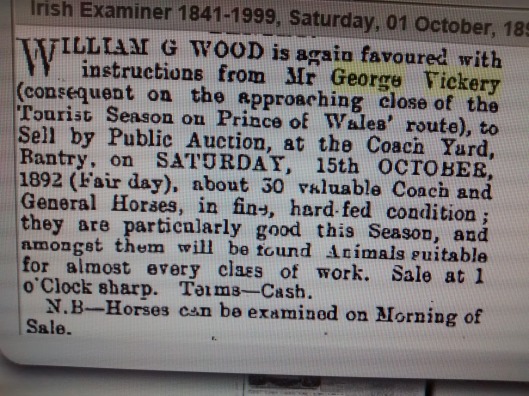 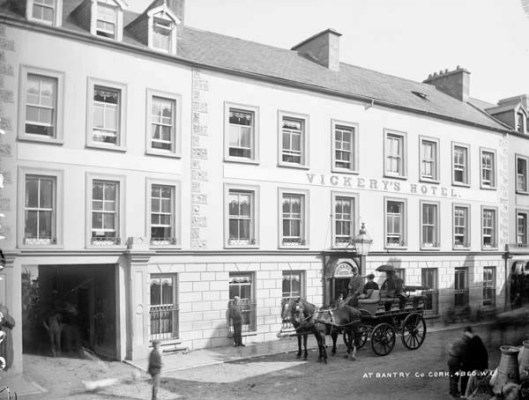 From National Library of Ireland photographic collection c 1890s.  Burnt down during Troubles to prevent use by Black and Tans.

The legend is that the Vickery family of Co. Cork are reputed to be descended from two brothers from the West Indies who were shipwrecked in Bantry Bay in the mid-18th century. This however is unlikely as there are Vickeries in early 18th century Bantry leases suggesting they were around pre 1700.

He established a hotel on the site of an old dye works in Bantry c1850 and it continued in business until late 2006 when it was bought by a development consortium.  During the troubles the hotel was burned down and reconstructed with the novelty of a wash hand basin in every room.

In 1850 the hotel had 25 bedrooms and it was also the  centre of a coaching establishment. This linked Bantry to Killarney on the emerging tourist route. Up to 100 horses were kept for this purpose.

Thomas Vickery’s nephew Robert Stanley Vickery stated that his uncle with establishing his hotel and postal arrangements for the establishment of tourist did more for Bantry and its neighbourhood then the Bantry (White) family ever did.  Countless people had their first training in catering and business in the hotel and in the garage business the family also ran.  Many went on to found their own businesses or work in  others all over Ireland and the world.