It is difficult to imagine now but even 50 years ago horse usage was of particular importance in the western parts of West Cork.  The tractor did not really take over until the late 1960s.  With horses come blacksmiths.

To give an idea of their importance,  the 1901 census records 675 blacksmiths in Co. Cork with 875 in 1911.  Not all were conventional blacksmiths, in Kilcrohane RIC Barracks one of the Constables born in Co. Kerry had been a blacksmith prior to joining.  Likewise among the British Forces of Occupation quite a number were blacksmiths prior to enlistment.  The Mines also had blacksmiths.  A Norman Locke born in Scotland was a blacksmith in one of the local Bantry barytes mines.

Jimmy Coakley  of Tureen had the tradition that Black Jack O’Mahony  started out collecting urine in tubs in connection in the early 19th century with the local weaving industry.  There is a suggestion that this branch of the O’Mahony family migrated from Leamcon in Schull around the 1790s with their father Tim, a  blacksmith.

At the Bantry Quarter Sessions in July 1881, Mr Ferguson Q.C. referring to the system of boycotting and the scenes in West Cork that had paralysed trade and injured the prosperity of the district, there were only two trivial cases before the court.  Durrus parish featured in a newspaper report of two incidents one in Dromreagh, where a farmer had his windows broken as he settled with his landlord after he had been ‘processed’ for arrears; in Kilcrohane the forge was set on fire as the smith had served farmers who had been boycotted.  The article stated that there had been a number of such incidents in Durrus in the previous months and it was getting an unenviable reputation, and the police were considering erecting iron shreds to protest property.  These were temporary police stations erected in areas of outrages. 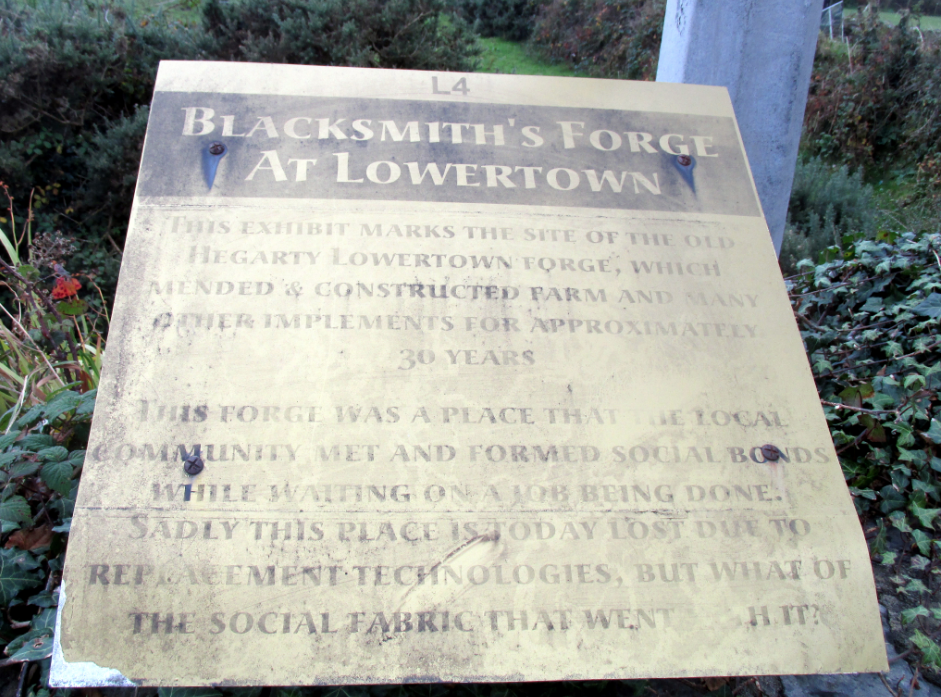 A poor blacksmith 1853 in America

Daniel O’Connell presided at a monster meeting in July 1842 attended by an enormous crowd from all districts of West Cork.  Estimates range to a few hundred thousand.  Prior to the meeting he lodged with Fr. Doheny P.P. Dunmanway, and travelled with him by coach and four.  As they approached Skibbereen they were met by a procession made up of bakers, blacksmiths, shoemakers, tailors and weavers preceded by a band.

​​Elihu Burritt (1810-1879), ‘The Learned Blacksmith’, of Boston, USA, Visit to Skibbereen, West Cork, 1847 to ‘Fathom The Cause of Extent and Cure of Ireland’s Misery, his Pamphlet ‘Four Months in Skibbereen’ raised $100,000 for Famine Relief and his Project the Jamestown Relief Effort.

Read on by clicking above