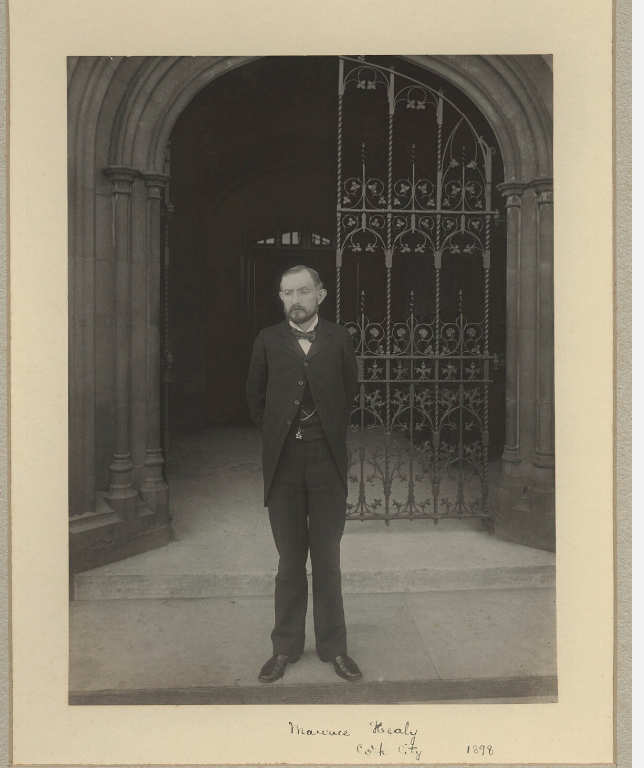 Healy, Maurice (1859–1923), solicitor and politician, was born 3 January 1859 in Bantry, Co. Cork, third son of Maurice Healy, clerk of Lismore Union, and his wife, Eliza, sister of A. M. (qv) and T. D. Sullivan (qv). He was the survivor of a difficult birth, which killed his mother and his twin brother. Legend has it that the nurse placed him in the arms of his older brother, Tim Healy (qv), and enjoined the four-year-old to look after him; certainly the brothers were distinguished by their lifelong devotion. Maurice was educated at the CBS, Lismore, and was admitted a solicitor in 1882. His ability was exceptional: while still an apprentice he had assisted his brother in preparing the ‘Healy clause’ of the 1881 land act, and had worked with C. S. Parnell (qv) in early 1882, while Parnell was still imprisoned, in drafting a bill to amend the act. The normally uneffusive Parnell said in 1890: ‘Maurice Healy knows more about the Irish land question than anyone now living. It was he who marshalled the facts and drew up the plans [in 1882]. To me and the party he was simply invaluable’ (quoted Times, 12 Nov. 1923). Healy subsequently built up a considerable reputation as the legal representative of the tenants in the commons court set up under the 1881 land act. Other high profile cases in his early years included representing (April 1883) an alleged Fenian, Timothy Carmody, on charges of conspiring against the queen, and also (January 1883) William O’Brien (qv), then editor of United Ireland, on charges of seditious libel.

In 1885, at the behest of his brother, he was returned for Cork city, close behind Parnell and held the seat 1885–1900, 1909–10, and 1910–18. Although generally reckoned an excellent constituency politician, who even gained the approval of Cork unionists, he had a difficult time at elections in the years 1900–10, largely because he became caught up in his brother’s quarrels. In 1900 he was unseated by William O’Brien in a violent campaign during which A. M. Sullivan received head injuries. However, over the next decade there was a rapprochement between his brother and O’Brien; and on the latter resigning his Cork city seat in 1909, Maurice was elected over the Redmondite candidate. Although he had taken the Irish parliamentary party pledge, he was refused admittance to the party because its members felt he should not have stood against their candidate, so he sat as an independent nationalist until January 1910, when he narrowly lost the seat, only to be returned two months later for Cork North-East (March–December 1910) when O’Brien resigned it in his favour. The December 1910 election saw O’Brien and Healy both returned as independent nationalists for Cork city, and Healy held this seat until he retired in 1918.

Described as ‘spectrally thin, his temper icily cold’ (O’Connor, ii, 179), but also as modest and courteous, Healy had as his most marked political trait an unquestioning loyalty to his brother, which landed him in factionalism and violence alien to his nature. A frequent and precise parliamentary speaker, he was invariably sought out for advice on the land issue, but his grasp of taxation and finance was equally sure. There was scarcely an Irish bill put before the house on which he did not comment, his interjections being always dry, legalistic, unemotional, and effective. T. P. O’Connor (qv) termed him a ‘most dreary speaker, but had an extremely acute mind’ (ibid., 179). He was particularly active in his early years in opposing the coercion bill of Arthur Balfour (qv), and attended a proscribed meeting in Cork in October 1887 to propose a motion condemning the government for its treatment of ‘the peaceable and orderly city of Cork’ (Times, 26 Oct. 1887). During his last eight years in parliament he was increasingly passive. He could see no merit in Sinn Féin, and on this one issue refused to be influenced by his mercurial brother, though the latter accused him of ‘mental arrogance, mid-Victorian sentiments and inconsequential platitudes’ (Callanan, Healy, 541–2). Critical of the behaviour of de Valera (qv) over the treaty, he was concerned by the possibility of republican violence and his fears were borne out. During the civil war he was put on a steamer out of Cork by anti-treatyites, in reprisal for having advised the Cork merchants that payment of republican levies would not discharge their income-tax liabilities. He stayed away for two months, and thereafter an attempt was made to burn down his house. He died at home in Temple Hill, Ballintemple, on 9 November 1923, to the great grief of his brother, whose memoirs, dedicated to the memory of ‘drahareen og machree’, closed with Maurice’s death: ‘Had I preserved my brother’s letters as he did mine, these pages would not have lacked lustre’ (Healy, 662). He apparently destroyed them in a moment of panic during the war of independence.

Maurice married (1887) his cousin Annie, daughter of A. M. Sullivan, his brother having married another Sullivan cousin, and had two sons and a daughter. His eldest son was the barrister Maurice Healy (qv).