1844.  Evidence of Alexander O’Donovan, Petty Session Clerk, Bantry into Percolation of Local Cess Collectors.  It probably related to the O’Sullivans and their network who were the Baronial Constables (Cess Collectors) of Bantry and Bere at the time.

This evidence was given in Bantry to The Inquiry re Land Occupation on the 9th September 1844. He said that every Collectors of County Cess were dismissed around 1840.  Hutchins (local Magistrate) swore that the Grand Jury appointed the dismissed man’s son to the job.  He also said that every collector in his time for about the previous 20 years had been dismissed for percolation.  The actual deputy collector was dismissed and fled to America.  Hutchins and the authorities selected a police man to go to Clonakilty on his return he said he was dead which Hutchins doubted.

The cess to pay for roads, bridges, and other public works was set in the Baronial ‘Presentment sessions’, where petitioners applied for funding for such works, were originally held as part of the county assizes, though the costs were paid from the barony cess if the work was of local benefit only. The county grand jury was supposed to have included jurors from each barony, though this did not always happen. From 1819, significantly modified in 1836, baronial presentment sessions were held for these purposes, with a local jury picked by the county grand jury from among the Barony’s highest rate-payers, according to a complicated formula. The baronial presentment sessions were a convoluted process, lacking public confidence and marred by allegations of corruption and favouritism. Special emergency sessions were held during the Famine of the 1840s for the make-work schemes. 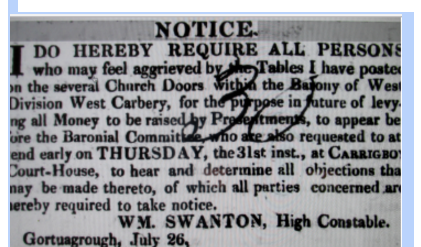