It is difficult to identify all the townlands and people’s names from the deed.  Some adjustment to the modern format is made. In the National Library in perfect condition on parchment.

The Dunmanway Patricksons are associated with the Blairs. Whites (later of Whiddy, Bantry), Fenwicks, Davies.  For some Blair Genealogy:

For some Blair Genealogy:

William Blaire, Dunmanway appointed Justice of the Peace.   Ancestor of Blairs of Blairs Cove, Durrus intermarried with Whites of Bantry.  In business with Fenwicks of Dunmanway/Skibbereen and Macroom in land purchased from Hollow Blade Company.  This London Company financed the wars by the English Parliament culminating with the Battle of the Boyne and they were repaid in land bonds of forfeit Irish land.

In a deed of 1713 William Blair of Dunmanway son of Elinor nee Patrickson (she is sister to Rev. John Patrickson, Chantor of Cloyne) appears.  1719 married Sarah White of Whiddy Island.

Sir Richard Cox, 1757, Dunmanway. Subscriber James Simon Irish Coinage 1749.   On 1741, famine, 500 dead in his parish, ‘burying the dead used to be one of the most religious acts among the Irish is now a burden’.  The Papists thought they are bad members of this society are yet better than  none.  Sir Richard Cox of Ireland in the year of 1733, came to the possession of a large, fruitful but uncultivated tract of land, inhabited by a race of beggars, grown by habitual wretchedness so hardened that tho’, no sensible of the smart, they were not ashamed to prefer hunger and idleness to labour and competency. He therefore, directed his thoughts to remedy this evil; and wisely concluded that nothing but the establishment of a staple manufacture on the premises would answer the purpose.  For very sufficient reasons he chose the linen; and having procured a quantity of flax seed in 1735, prevailed with them to sow it and by dint of perseverance, and a series of admirable expedients to rectify his own mistakes, to render sloth infamous, to excite emulation, to increase his colony, if it may be so called, and to interest all the passions of those concerned in its success, he at last fixed it on such an establishment, as, if the same laws are observed, bids fair to to perpetual.   Already the little town has undergone a wonderful change; for whereas, in 1735, it contained at most but 50 houses, many of them only fit for beggars, it now contains 117 houses, whose inhabitants are fully employed and take pleasure in being so.   This is true patriotism and policy united; a sphere of ambition, that every gentleman may follow innocently; laudable, and profitably.   Sir Richard Cox introduced families from the North of Ireland to assist names such as McGivern (McGovern from Leitrim/Fermanagh), Maguire, Pattison and McMullan among others.   There is a praise-poem to Sir Richard Cox composed by the otherwise unknown poet Cormac Ó Luinín and transcribed in the hand of Charles O’Conor (1710-1790) in a manuscript held in the library of of Clonalis House, seat of the O’Conors, in Castlereagh, Co. Roscommon. A digital copy is held on the Dublin Institute of Advanced Studies website at ISO [Irish Script on Screen Project] 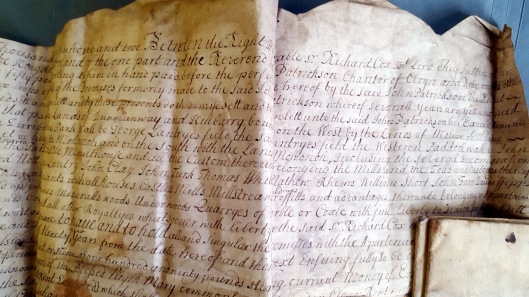