John Stevens was a Jacobite and landed in Bantry on the 2nd May 1689.  The enclosed piece is from a collection of tales in ‘Diaries of Ireland’,  An Anthology 1590-1987, by Melosina Lenox-Conyngham, The Lilliput Press, 1998.

We landed in Bantry, which is a miserable poor place, not worthy of the name of a town, having not above seven or eight little houses, the rest very mean cottages… Two nights that we continued here I walked two miles out of town to lie upon a little dirty straw in a cot or cabin, no better than a hog-sty among near twenty others.  The houses and cabins in town were so filled that people lay all over the others.  Some gentlemen took up their lodgings in an old rotten boat that lay near the shore, and there wanted not some who quartered in a saw pit.  Meat, the country brought in enough, but some had not money to buy, and those that had for want of change had much difficulty to get what they wanted, the people being so extremely poor that they could not give change out of half a crown or a crown, and guineas were carried about the whole day and returned the whole.  Drink there was none, but just at our landing a very little wort (infusion of malt before it is fermented into beer) hot from the fire, which nevertheless was soon drunk; and good water was so scarce the I have gone half a mile to drink a spring….

Much of the morning was spent in looking for horses; at last with difficulty, Mr Lazenby bought a little nag, on which we lay his, Major Price’s and my clothes in two portmanteaus, and having loaded our horse marched afoot driving him before us twelve miles to Dunmanway 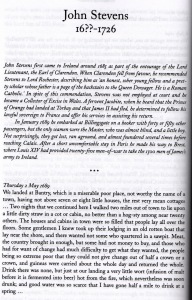 1 thought on “John Stevens, visit to Bantry, May 1689, ‘Not worth the name of a Town, having not more then seven or eight little houses the rest very mean cottages.”