Sarah Dukelow is still alive, formerly a National Teacher, July 2016. The teacher in her school, St. James, Durrus, Líam Blennerhassett, from Tralee was particularly inspiring. Part of the collection has now gone online the rest in phases will happen. The collection is the most extensive in the world.  It was saved from possible destruction in the 1960s by TK Whitaker who ordered it be placed in the new UCD campus from the dangerous store at Stephen’s Green.

She said that two of her informants were Jack Dukelow and Mick Bohane the parish Priest’s manservant.  Her father used to have ‘scoraoichts’ in his house at Sea Lodge. Some distance away on Sundays there used to be a pattern for local dances in the afternoon.

From Mick she got a poem in Irish which she transcribed. He did not speak Irish but this was by his grandmother in the style of the lament composed by Eibhlín Ni Chonaill on the death of her husband, ‘Caoineadh Art Ó Laoighre’. She wrote it in the jotter supplied but the teacher did not send all the jotters to Dublin. She said that went to Dublin was only a fraction of what she collected.

Jack Dukelow died in around 1954 and was from Rossmore, grandfather of the present Eric Dukelow. On his mother’s side he was Sullivan one of the Hurrigs who claim descent from O’Sullivan Bere. He told her that during the Famine boats from America used to come with meal to the pier near her house at Gearhameen. On one occasion the meal landed it the man in charge called out names from a list. On man from Kilcrohane was in a terrible condition but as his name was not on the list he got nothing. Jacks usual greeting to people was ‘T’anam an diabhal.

She mentioned that in the long hot summer of 1940 Tuna arrived in Dumnanus Bay and the pilchards returned. Her father used to cure them on slabs on the pier in front of their house at Sea Lodge, Gearhameen.. 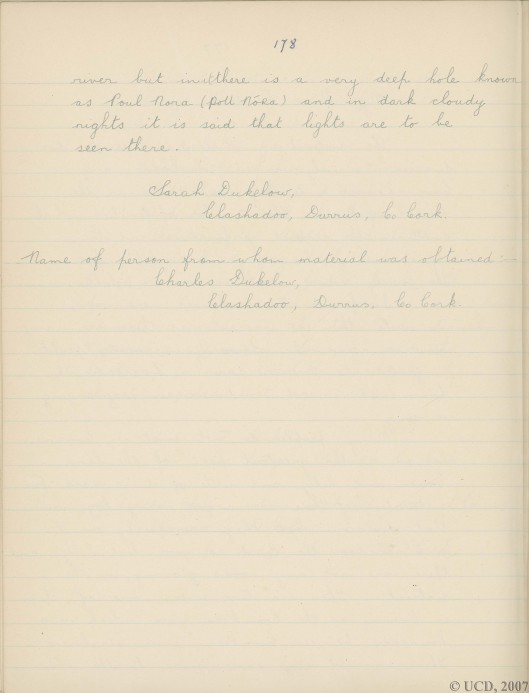