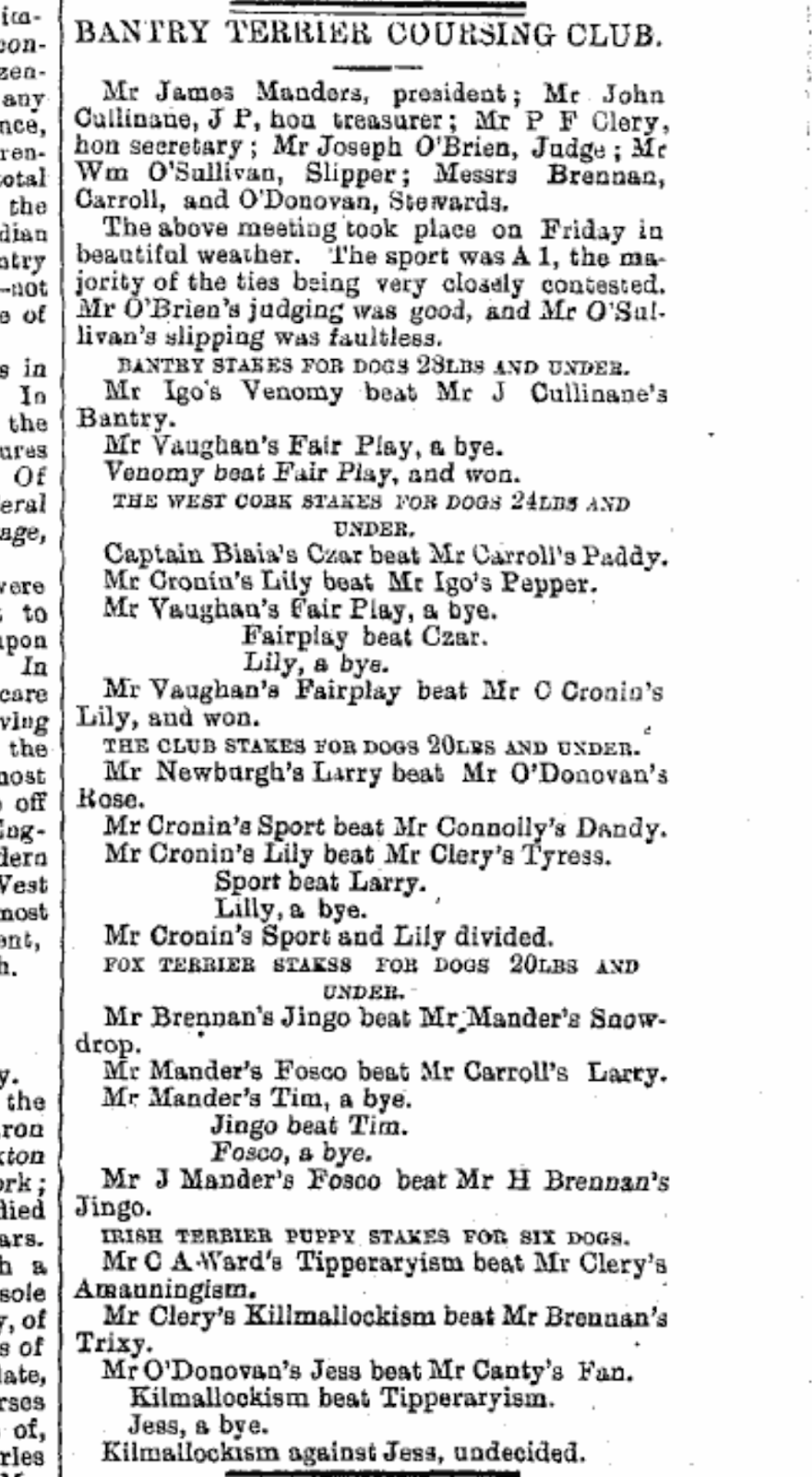 William Warner of Bantry owned creameries at Killarney, Enniskeane and Ballinacarriga and developed a brand of butter aimed at the export market. In partnership with James Manders (son-in-law) who later left the partnership he started a factory at William Street.  By 1886 its production was £6,000 in the summer and employed a hundred men including fifty coopers. In 1892 it was producing 800 tons a year.

The Musgrave Cork family owners of the Super Valu Group are descended from Bantry Warners on the female side. 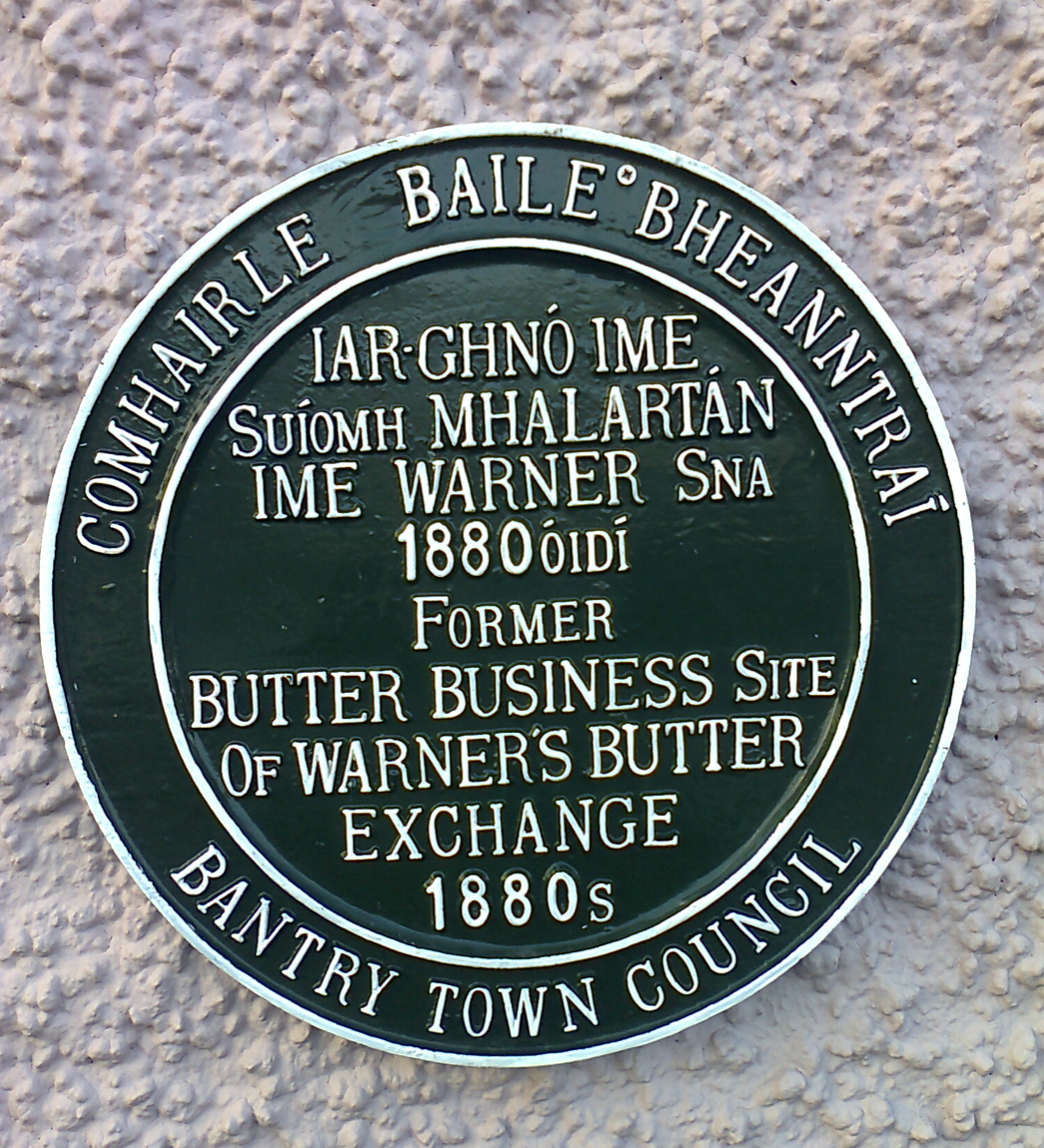 John Cullinane, (1834-1900) The Square, Bantry.  1895 treasurer Bantry Terrier Coursing Club. 1898 thanked by Bantry Board of Guardians for providing a meal for the inmate of the workhouse consisting of meat and vegetable followed by currant cake and

Timothy O’Donovan JP to Dr. John O’Donovan on The Real Irish Greyhound not the wolf dog called the …..‘Guire Mac Fhira’ the Irish Grey Hound is called ‘Conn’ and was spelled Gre-hound, this breed is quite smooth silk like satin it is a mistake to confuse the rough or wiry dog being of Scotch descent and never could compete with the real Irish in Fleetship or Beauty, Richard Hungerford Evanson, Coursing at Dromreagh in the 1864.

The O’Donovans were clearly into dogs, his brother Doctor Richard placed an ad in a newspaper in the 1827 for a lost bitch ‘Lily’ at Ahakista. The House at O’Donovan’s Cove had a large area devoted to kennels

Richard Hungerford Evanson, Friendly Cove, held coursing meeting in Dromreagh in the 1870s which appear in the Skibbereen Eagle.

https://durrushistory.com/2015/07/01/29th-october-1864-coursing-meeting-of-friendly-cove-coursing-club-carrigboy-durrus-met-at-dromreagh-by-invitation-of-richard-evanson-esq-owner-the-ground-was-long-known-for-hares-being-strict/
Gaming in the hills was popular Lord Bandon maintained Durrus Court as a hunting lodge.

Many thanks my dear friend for your recent collection and very handsome present, which I value highly, and my young friend, I shall it have properly framed, and ornamented with name of the artist.
I hope the book arrived safely . In some of the old Coats of Arms of the O’Donovan family I have seen the motto was ‘Ver Super Hostem”. I could not account for this crest was always the same ..
The Carbery O’Donovan I regret to say are wearing
he is at present abroad and is now fourteen. His father has been in Germany for 3 years and was very reckless and extravagant but his property fortunately was strictly entailed the land is secured to his family. His wife is grand daughter to Daniel O’Connell, the mother of my wife was a Miss Lavellan, Co. Limerick, a daughter of Philip Lavellin of Water park in the County of Cork. Her sister was married to Mr. Puxley of Dunboy Branch?. The grandson the present Mr. Puxley is a man of immense wealth the principal owner of the famous Allihies Mines in the Barony of Bere
I return Count McDonnell’s letter which is very interesting such as may be expected from one of the ancient race. I also return the other letters, with the Crest of the Wexford Donovans and your own. I hope to hear sometime from you at your pleasure and look forward with hope to our meeting in the ensuing.
…….papers and the pleasure when of my young friend, your son, I would accompany you.
I have still … of the real Irish Greyhound not the wolf dog called the …..‘Guire mac Fhira’
the Irish Grey Hound is called ‘Conn’ and was spelled Gre-hound, this breed is quite smooth silk like satin it is a mistake to confuse the rough or wiry dog being of Scotch descent and never could compete with the real Irish in fleetship or beauty.

Wishing you and yours every prosperity and happiness I remain your obliging friend an affectionate clansman,

I also return the very pleasing testimonial of the merits of your son Edmund from Sir Bernard Burke.

Latin ‘A man above his enemies”
The Cork Levellins were of Norman descent some of the family conformed to the Church of Ireland.
Elsewhere Dr. O’Donovan comments on the Wexford branch who may have come from West Cork purchasing Cromwellian Debentures in the 1840s the incumbent was described by Dr. O’Donovan a a ‘Bigoted Orangeman’

Marmion is probably merchant, landowner, owner of coaches.  The Family came from around Dundalk to manage Becher Estate c 1740, an old Norman family who conformed to the Church of Ireland.

In the 19th century there is a lot of concentration on religious and political differences. We forget the common culture and dogs in their manifestation was one of them.