April 1921, Burning by IRA of The College, Rosscarbery, Co.Cork, reputedly the lineal successor of a famous school established in the sixth century by Saint Fachtna and Derry House Rosscarbery, House of Alexander Sullivan, Kings Counsel and Last Serjeant-at-Law Only Barrister Who Could Be Obtained to Defend Sir Roger Casement 1916

Though their initial plan for a full-scale assault against the Rosscarbery police barracks was derailed, members of the West Cork Brigade mounted another and this time successful effort at the end ofMarch 1921. Bombs and fire destroyed the ground-floor rooms of the barracks before its defenders surrendered with heavy casualties two dead and nine more wounded. Adjacent to the barracks, and almost in the centre of the town, stood that venerable and Protestant institution called “The College” (figure 3), which was directed byMrs. Zoe Louise Becher, wife of the Rev. Harry Becher, the Anglican rector of Rosscarbery.1 Reputedly the lineal successor of a famous school established in the sixth century by Saint Fachtna, foundress of the diocese of Ross, the college had served “for a long time past”as a Protestant academy, and in 1921 it had perhaps forty students from well-to-do families. After the Rosscarbery RIC barracks had been blown apart, rumours spread that the crown forces were about to occupy the college; the IRA promptly intervened and burned it down on 2 April. About a week later, the Volunteers pressed their advantage, returned to Rosscarbery, and torched Derry House purchased two years earlier by the prominent barrister Alexander Sullivan.   As His Majesty’s first serjeant-at-law for the British administration in Ireland, Sullivan was highly unpopular. In fact, he had been the target of an attempted assassination in January 1920 while working as a crown prosecutor in County Kerry.  He was widely known for his denunciations of both the Sinn Féin party and republican violence. The destruction of Sullivan’s mansion removed one of the few remaining Big Houses in or very near the town was potential accommodation for police or soldiers.

The College is mentioned in the 1840s letters of Dealy, (Daly) Bantry shipowner and timber merchant, trade is bad and only for a loan from friends could he afford to send his boys to the college.

Private. I wrote you some disponding letters in April last. at that time I was hard pressed to meet some bills – and I was preparing to remove my boys from Rosscarbery School (Diocesan Secondary School) which would have been a severe blow to your aunt. but thank Providence I met more kind and good friends and if I can rub over another season I am in hopes that I will not owe any a man a shilling particularly if I can effect good sales & to encourage which I am offering goods on low terms. The fisheries have nearly failed here as yet this season & I hold a large stock of salt __ has improved the English market & I am a considerable holder.

Sergeant Sullivan’s mother was Donovan perhaps linked to the area his father was from Bantry.

Alexander Sullivan, seen standing, Kings Counsel and Last Serjeant-at-Law Only Barrister Who Could Be Obtained to Defend Sir Roger Casement 1916. Note women facing Judges.  First women to be allowed by special dispensation to be part of a legal team in their case that of defending solicitor Gavan Duffy.

In July 1916, during his appeal against his death sentence for his role in the Easter Rising, Roger Casement wrote to his family, asking, “Who was the painter in the jury box?”

The painter was a rather unlikely presence: Sir John Lavery, born into a Catholic family in Belfast, was renowned for his portraits of English high society, and his studio had been visited by royalty. He had been invited to record the appeal trial by the presiding judge, Sir Charles Darling, a former client of his. Yet, as Casement noted, the painter “came perilously near aiding and comforting” the prisoner in the way he “eyed Mr Justice Darling’s delivery” of the verdict confirming the death sentence. Casement also noted that Lavery’s wife, Hazel, looked “very sad” at the same moment. The uneasy relationship between Lavery’s position as part of the imperial artistic establishment and his growing sympathies with Irish nationalism would produce a painting at once monumental and hard to place.

Lavery’s record of this moment in history is literally the work of an insider: it is possible only because Lavery was respectable enough to be given privileged access to the trial. Lavery later claimed that Darling had commissioned the work. Yet the result is not the grand image of imperial justice that might have been intended. The conventions of the genre are honoured in the large scale – three metres wide and two metres high – and the meticulous portraits of dozens of individuals. A sense of dramatic moment is created by the slanting light and by the clock that approaches the fatal hour of 12.

But the judges are almost statuesque. All the animation is given to Casement’s defence counsel. And the centre of the picture is occupied by Casement himself, who seems simple and human amid the pomp. He looks not at his judges but at the viewer. This is to be the judgment not of a mere court but of history.  Courtesy Irish Times. 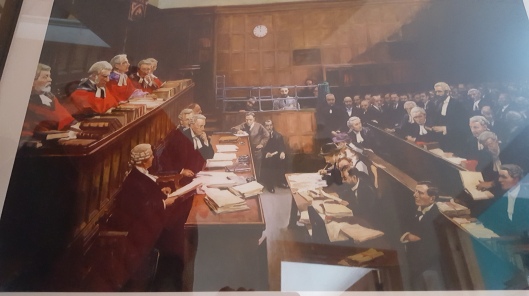 3 thoughts on “April 1921, Burning by IRA of The College, Rosscarbery, Co.Cork, reputedly the lineal successor of a Famous School Established in the Sixth century by Saint Fachtna and Derry House Rosscarbery, House of Alexander Sullivan, Kings Counsel and Last Serjeant-at-Law Only Barrister Who Could Be Obtained to Defend Sir Roger Casement 1916”