The backdrop is the heightened tensions political and religious with the advent of Catholic emancipation.  The balance of economic advantage had probably moved to the Catholics.   The landed families had commenced a spiral of decline. However given the emergence of two sectarian states in Ireland in the 20th century the triumph call of the danger to civil and religious liberty can be entirely dismissed.

As explained in the ‘Background History’ page, the Act of Union in 1801 and successive reforming measures in the early years of the century drove the Anglo-Irish Protestant community into a position of permanent political minority. Seeking to affirm and uphold the integrity of the ‘Protestant Constitution and State’ they held several meetings during the first three decades of the century. According to newspaper reports of the time certain members of the family attended some or all of these meetings but it is difficult to pinpoint all of them (7a).

The Southern Reporter & Cork Commercial Courier of 23 December 1828 carries a report of a meeting in Bandon on Monday 22 December 1828 for the purpose of forming a Bandon Brunswick Constitutional Club (7b) “in defence of our liberties and the safety of the Glorious Constitution under which we live”. The Meeting was chaired by the Hon William Smith Bernard and ‘John Townsend Esq son of the Recorder of Clonakilty’, ‘Samuel Townsend junior’ and Thomas Somerville are recorded as attending. A copy of the newspaper article is included in John’s ‘Scrapbook’.

At the meeting of the Protestant Conservative Society of Cork held at the Imperial Clarence Rooms, Cork in August 1832, and reported in the Dublin Weekly Mail of 11 August 1832, ‘Samuel Townshend’, ‘Samuel Townsend’ and ‘Thomas Townsend’ were elected to a committee to carry out the resolutions agreed at the meeting “to preserve the remnants of the constitution and maintain the integrity of the United Kingdom”.

The Southern Reporter & Cork Commercial Courier of 11 October 1834 carries a report of the Protestant Meeting in Bandon on Tuesday 7 October. About 5,000 attended and the purpose of the meeting seems to be an affirmation of Protestant superiority; again ‘Samuel Townshend’, ‘Samuel Townsend’ and ‘Thomas Townsend’ are shown in the list of those attending. Included in the article is a very eloquent statement by John in support of the cause but proclaiming “Would to God that we could live on terms of political as well as private and personal friendship with our Roman Catholic countrymen!” (This is included in his ‘Scrapbook’.)

One of the prime movers the Rev. Somers Payne.

Rev. Somers Payne, Pre 1815, Upton, Grand Master Orange Order, Co. Cork.  Bandon Brunswick Constitutional Club 1828, sitting Bantry and Bandon, 1835, Provost of Bandon. Agent to Lord Berehaven since 1820 son Augustus agent to Lord Bantry.  Parliamentary Commission sitting Bantry 1845 showed sympathy for labourers and cottiers.  The Rev. Somers Payne’s mother was sister of John and Henry Shears, Barristers in the City of Cork, who perished on the scaffold for alleged ‘high treason’ at the opening of the present century. 1835 Subscriber Lewis Topographical Dictionary of Ireland  1837. Land record, 1870, 653 acres.  Head of the orange Order in Cork he felt the order would divert the lower orders of Protestant from drunkenness. 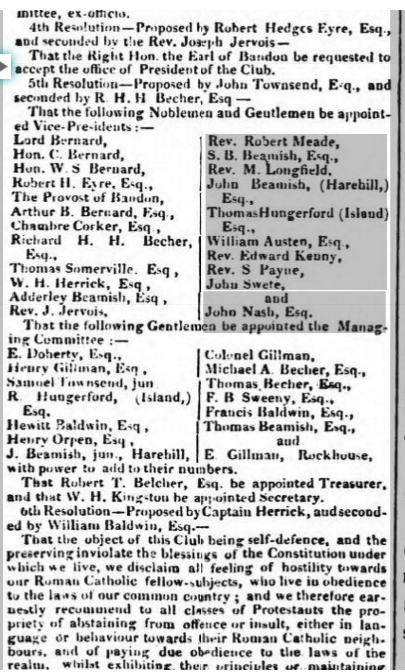 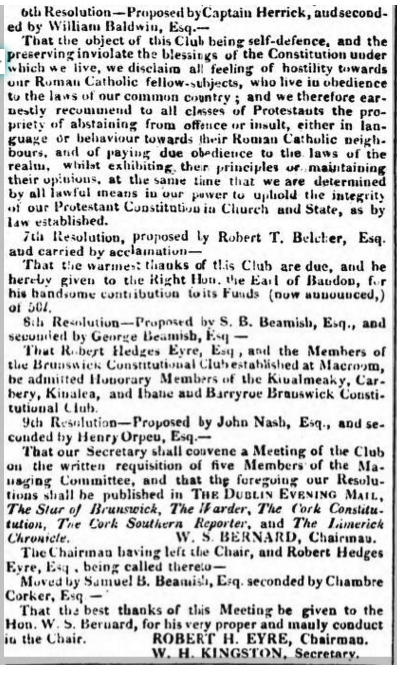 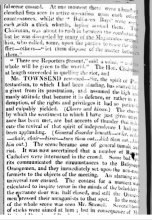 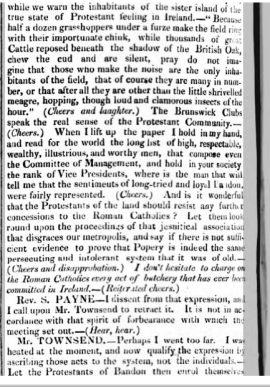