Follett was born at Topsham in Devon, the son of Captain Benjamin Follett, who had retired from the army in 1790 and gone into business, and his wife Ann Webb, daughter of John Webb.[2] His younger brother was Brent Spencer Follett (1810-1887) QC, MP.[2]

Thomas Addis Emmet” One of the first lawyers in Dublin and one of the most virtuous and most patriotic of men. He was a member of the Irish Directory with Lord Edward Fitzgerald and was arrested in 1798. He was sent to Fort George. Liberated and expatriated in 1803 like the other prisoners of Fort George. He was chosen by the Irish in Paris in 1803 to be the agent from the Provisional Government of Ireland to the First Consul and French Government, which situation he held till 1805, finding there was no prospect of an expedition to Ireland he got his passports and went to  America, where the Congress passed a decree, by which, contrary to the usual term of ten years, he received his naturalisation twenty-four hours after landing there. He rose to great eminence as a lawyer in his newly adopted  country and died at New York.

Judge Robert Swanton American Passport application was signed by a Dunscomb, likely to be connected to Cork family. 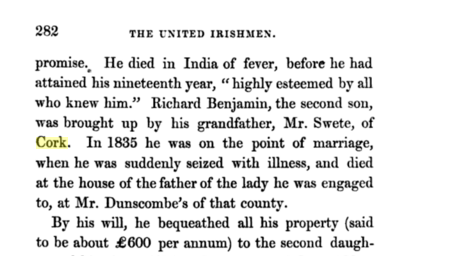