The Cork Cotters like the Coppingers  are of Hiberno-Danish/Norman descent and anyone with Cotter blood will find DNA matches in Denmark and Norway.

The West Cork Cotters descend from a number of families who moved or were expelled from EastCork to Inchigeela c 1650.  The church there is still used fro family burials.

Same of these Cotters converted to the church of Ireland before adn after the Penal Laws and were prominent in Land, The Church of Ireland. the Military, Law and Medicine.    .  Most but not all of the West Cork Cotters are Catholic.  Probably most of world wide Cotter descent from the West Cork branch, give heavy emigration.

I looked in the 1861 Canadian census for George and found George S Cotter, born Ireland, age 73, Church of England, occupation “Arms.” Immediately below him were 3 Cotter women, all born Ireland: Jane 58 married, and two single women, Isabella 60 (sister?) and Catherine 37 (daughter?). These people lived in Dunn twp, Haldimand county, Canada West. Note that “Canada West” became Ontario, so I suspect George died there, rather than “western Canada.” Dunn twp no longer exists, but the town of Dunnville is just a stone’s throw from Lake Erie. Ancestry has more than one public tree for this family. 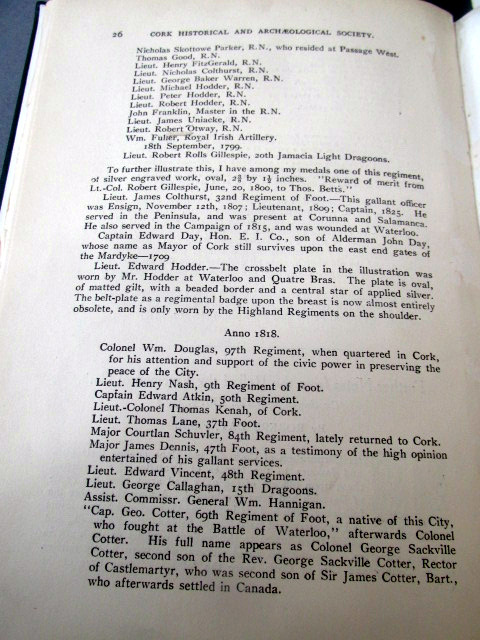