Charles is probably of the same line as Jeremy/Jeremiah Coughlan, Attorney, Seneschal, agent 1700 with Andrew Crotty of the Devonshire Estate in East Cork and Waterford.  He was related by marriage to the Durrus Evansons.  Another branch of the same family were granted estates by the Boyles in Carrigaline.

The Coughlans probably pre date the coming of the Celts to Ireland.

Some mid 18th century marriages in the Mizen area:

The 18th century records are either non existent or destroyed.  The case ran for a number of days and the report casts light on the family relationships and friendships.  Incidental detail includes that the coach took 2 hours to go from Dunmanway to Bantry.  It also shows that in West Cork stripping religion the population is far more diverse genetically than is commonly believed. A recent post dealt with Alexander Clerke from Skibbereen who prospered in Tasmania.  Included in the family papers in Tasmania were records of the McCarthy line going back to the dawn of time. 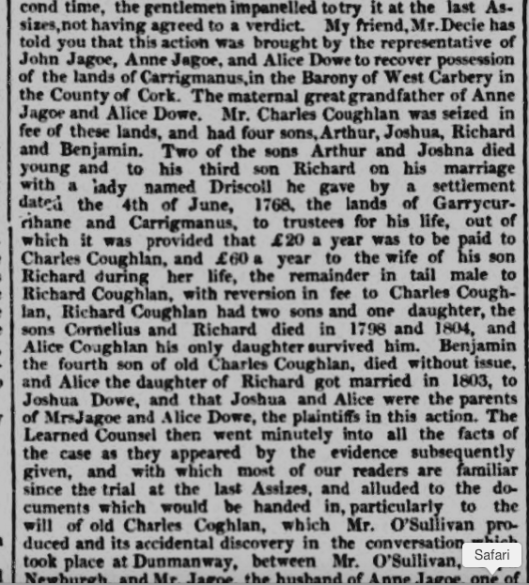 9 thoughts on “Case in Cork Assizes 1844 arising from Lands at Carrigmanus of Charles Coughlan Great Grand Father of Ann Jagoe and Alice Dowe, His Son Richard Married Miss Driscoll 1768 and made a Settlement. Litigation over Validity and Provenance of Wills. Names mentioned O’Sullivan, Notter, Simms, Young”