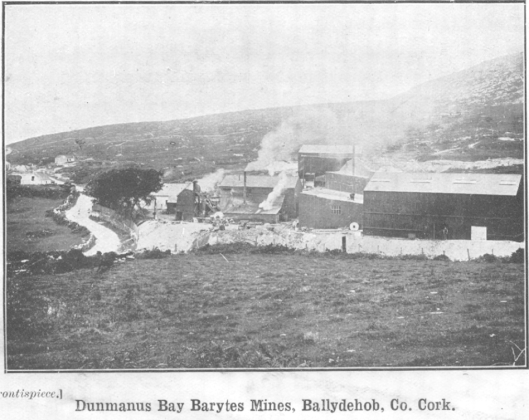 This was originally worked as a copper mine by the Rev. Traill of Schull, assisted by Captain William Thomas in 1840 and they sold 19 tons of copper.  They discovered barytes or barium sulphate, a heavy white mineral, used for paint, papermaking for which in the 1850s there was a limited market.  An early use was by Josiah Wedgewood in the making of pottery.  In 1863 Captain Thomas was chartering boats c 160 tons and shipping the barytes to Messrs Martyn Dennis Liverpool and around 150 people were employed.  That year there was a serious flood which resulted in the mine being non operational for a period.  In 1867 the mine at what was described as Cahirolickaney Mountain was inaccessible and Captain Thomas built a road from the mine to the Dunbeacon Road nearly a mile long in three weeks.  It was marked by a celebration with ‘creature comforts’ in abundance, followed by a dance.  Before the road was built the farmers had to carry sea sand and manure along the line of the rocky bed of a river and scramble up the mountain as best they could with back load on horses, men and women.  The road was called Wilson’s after one of the promoters by Father O’Regan.  There were quite a number of fatalities in the operation of the mine which were mentioned in the local press.

In 1851, 2,500 tons were raised compared to only 800 tons in three other centres in the former United Kingdom.  The material was washed, dried, crushed and milled.  It was then produced as barytes flour; this was packed into bags and sent to an island jetty in Dunmanus Bay by an aerial ropeway 1.23 miles long.  From 1909, the boats carried coal to Dunbeacon and left with barytes.  During the War men dived there looking for remnants of coal.  Prior to that the ore went by horse and cart to Schull pier. The mine also produced a small tonnage of copper (bornite) and approx 22,000 tons of fine barytes. It was worked by a Liverpool Company controlled by the Roe Brothers; one of the assistant Managers was Mr. Barton.  The mine used to be all lit up at night and it looked like a city.  At its height up to 500 were employed, supervised by Welsh miners. The nembers employed in 1915 were 150 described as highly paid.  Among those who worked there were the father and uncles of Danno Mahony of nearby Derreenlomane the World Wrestling Champion. Bells rang to call the labourers to work in the morning.  A report in 1923 described the treatment of the ore as ‘washing, drying, in a revolving furnace, crushing, rolling between steel rollers and milling’.  In 1917 a major fire caused extensive damage, including the underground workings.  Although repairs were carried out, the mine never recovered its former level of activity. In 1922 the then Department of Agriculture and Technical Instruction reviewed the recent history of the mine and commented on it being burnt down in July 1920.   Mr Lynburn of the Department expressed a hope that in time with a more relaxed regime re explosives it might re open.

A line of timber pylons ran from the mine site down the steep hillside all the way to Dunmanus Bay. The pylons, anchored to triangular concrete-and-stone foundations, supported a continuous aerial rope and a number of cable cars. The system was powered by a gas engine. The foundations are all still in situ and can be followed to the sea.  The ships which carried away the ore landed coal and during the War people dived in the area seeking lumps of coal.

Boats landed at a pier of which a buoy still survives. The Atridge, Shannon and Hegarty families from Rossmore across the Bay jointly owned  a fishing boat. They would regularly cross to trade potatoes, vegetables and meat for tobacco and brandy. The Captain was Captain was generally Captain Bousy and afterwards the Attridges were known as the Bousys. It was the custom for the miners to play football at a field near the mine every Saturday afternoon.

On the first trial of the aerial ropeway, a number of baskets were laden with barytes and sent down the steep hill to their destination, a pier at Dunmanus Bay.  From there it was exported to Liverpool, London or Glasgow.   However, on releasing the baskets it was discovered that the braking mechanism on the aerial ropeway had failed. On reaching journey’s end, the run-away cable-cars demolished a portion of the aerial rope and caused extensive damage to the system, presumably several pylons were torn from their foundations.

A local wit composed a poem to commemorate the event – the poem was titled  Coakley’s Apparatus’ One line of the poem describes the wicker basket in euphemism as ‘a donkey who would never have a foal’.

At the Dunbeacon side there was an area of houses now derelict which in the early 20th century was a hive of activity and centre of music and dancing known as the ‘Station Heights’. Many of the families were associated with the mines.

When the mines closed many of the miners went to the coal mines of South Wales or to the USA. One of them was Denis John L O’Sullivan, his father originally from Kilcrohane ran a pub in Durrus, who went to the USA and returned. He had a pub in Durrus Village which is still run by his son Danny.

See the full text of the Official Report here.