Right. Hon. James Francis 4th Earl of Bandon (1850-1924) , (see also Bernard) K.P., 1871, Castlebernard, Bandon.  Registered Vestryman of Christ Church, Kilmeen, 1870.  1903, Sale. Lord Bandon gives notice of his intention to sell his estates in Co Cork – extensive holdings with some 15,000 tenants. 1874-1877 on the staff of the Lord Lieutenant of Ireland, the Duke of Abercorn. Chairman Irish Landowners Association 1910 Listed 1913, listed 1922.  1888.   Landlords, Lord Bandon, Duke of Devonshire, Lord Bandon owns 40,941 acres in Co Cork, Duke of Devonshire has 32,550 acres. Eviction of some Bantry  tenants 1880s, somewhat surprising as the Earl of Bandon were of the better class of Landlord. Two of the three largest landowners in the Co. His 41,000 acres were sold  post 1903 to the Land Commission on what was regarded as fair terms. At the time 15,000 tenants.  It is likely that his Land Agents the Dohertys Bandon Solicitors received a considerable amount of the proceeds as they had advanced multiple mortgages to Lord Bandon over the years. 1877 appointed Lord Lieutenant for Co. Cork, a position held by his father and grandfather. Married Georgina Dorothy Evans Freke d 7th Lord Carbery and wife Harriet Shouldham, the Dunmanway Shouldhams are descended in the female line from a McCarthy heiress who converted. 1883 President Cork Industrial Exhibition and in 1902-3 patron of Cork Industrial Exhibition. 1900 Knight of St. Patrick. Chairman Bandon Board of Guardians and Bandon Town Commissioners. 1919 elected President  of a group proposing a War Monument for Cork.  Castlemahon was burned by IRA and kidnapped in 1921.    Compensation paid by the Irish Government as follows for the house £37,000, furniture £43,300.  Francis Bernard, great-grandfather of the first Earl, was a lawyer and politician while Francis’ younger brother Arthur is the 7th-great grandfather of Justin Trudeau, Prime Minister of Canada.[4][5] James Bernard, father of the first Earl, was a politician.  He died at Princes Gardens London. His funeral service in London was attended by officers of the Cork Artillery.

The family seat, Castle Bernard, built on ruins of former O’Mahony Castle, was one of the great houses burned during the troubles by the IRA  under Sean Hales on 21 June 1921. The home was burned as a counter-reprisal measure against British policy of burning the homes of suspected Irish republicans.

Lord Bandon was kidnapped and held hostage for three weeks being released on 12 July. The IRA threatened to have him executed if the British went ahead with executing IRA prisoners. During his captivity, Bandon reportedly coolly played cards with his captors, who seem to have treated him fairly well. Reportedly, Lord Bandon would give one of his captors, Daniel (Dan) O’Leary (also known an Leabhair, Irish for ‘Book’, based on the fact he was so well read), money each day for Leabhair to travel from the house in Kilcolman townland, to Slatterys pub in Ahiohill to purchase Clonakilty Wrastler (a local beer).

Unlike other West Cork estates that were founded on forfeiture of the former owners for  ‘Rebellion” the Bandon Estate was largely assembled by the legal fees generated by Francis Bernard, Bandon born Dublin  Barrister and later judge.

In 1877 the Cork Examiner in a comment piece referred to the families public spirited nature in promoting native industries, n being a Landlord family who lived locally. However it mentions that the reputation was blighted by a deep sectarian streak and a hostility to the Catholic religion that of the majority of the Irish population.  The Earl and his wife were deeply involved in Protestant evangelicals and proselytization including support in the case of the Earl of the REv. Fisher mission at Teampall n mBocht in the Mizzen Peninsula 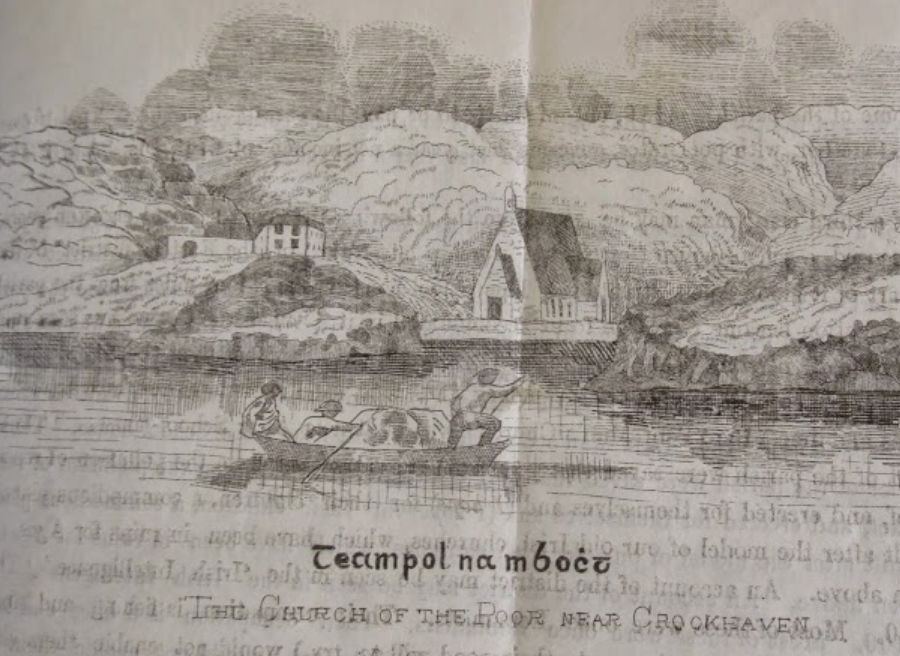 Despite its ruinous condition, this imposing castellated country house has retained its historic form and a great deal of its fabric. Built in the Classical style in the final years of the eighteenth century for Francis Bernard, the first earl of Bandon, it was remodelled and extended in the nineteenth century in the Gothic Revival style. The main block displays classically inspired proportions, breakfronts and bowed rear bay, while the later battlemented stone parapet walls, turrets, bartizans, balistrariae, arrow-loops and panel-tracery mask its regular classical character. The attached ruined medieval tower house of the O’Mahoney clan which was acquired by the family in early seventeenth century adds archaeological interest. Burnt as a symbol of British occupation in 1921, the house and its related buildings remain a spectacular addition to the architectural heritage and are a reminder of the wealth and prosperity of the demesne in the past.

Around 1971 Paddy Madden the Cork County Librarian acquired the papers of the Bandon Estate which are now in the Cork Archives, largely uncatalogued: https://corkarchives.ie/

According to Burke, the first Francis Bernard settled in Ireland around the time of Elizabeth I. In 1703 Francis Bernard purchased parts of the Earl of Clancarty estate in the barony of Muskerry, including Ballytrasna. A descendent, also Francis Bernard, was created Viscount Bernard and Earl of Bandon in 1800. The Earl of Bandon’s estate in county Cork amounted to almost 41,000 acres in the 1870s. At the time of Griffith’s Valuation, the estate was among the principal lessors in the parishes of Skull, barony of West Carbery, Ballinadee, Ballymoney, Desertserges, Kilmaloda, Kinneigh, barony of East Carbery, Ardfield, Castleventry, Kilkerranmore, Kilmeen, Lislee and Ross, barony of Ibane and Barryroe, Liscarroll and Buttevant, barony of Orrery, Kilmore, Knockavilly, barony of Kinalea, Athnowen, barony of East Muskerry, Caherlag, Carrigtohill, barony of Barrymore and Ballymodan, barony of Kinalmeaky. A Colonel Bernard, resident in India, was the owner of over 900 acres in county Waterford in the 1870s. The Waterford estate derives from Anne Bernard, who married Robert Foulkes of Youghal in the eighteenth century but bequeathed her estate to her nephew, Stephen Bernard. Sadleir, referring to the 1770s, mentions “Barnard of Prospect Hall, lives mostly in London” and notes that Stephen Bernard was MP for Bandon, 1727-1757.