He was a French Jurist and Political Scientist. He visited Ireland in 1835 and was shocked at the poverty and degradation of the common people.  The one institution he felt kept the country together was the Catholic Church and remarked on the strong bond between church and people,  In contrast in France the Catholic Church was reviled.  He correctly foresaw the coming of the Land Commission and Irish Independence.  However he wondered in the event of independence how such a  powerful institution as the Catholic Church in Ireland could be controlled.

In this 1890 account of West Cork against Parnell the clergy were very much in control.  The Catholic Church is blamed for the downfall of Parnell.  However the ire is misdirected.  The pressure on Gladstone came from his Welsh Methodist constituents who demanded an end to the alliance with the Irish Parliament Party if it continued to be led by an adulterer  as they perceived it.  Parnell lived openly in South London for a number of years with  Kitty O’Shea.

Remains of Protestant Denomination in Cork

A frequent narrative is the imposition of a severe yoke by Irish Protestants on the Catholics who vastly outnumber them.  In the Case of Cork city he says that in 1835 there were 80,000 Catholics out of a population of 107,000.  All the officers of the Corporation are Protestants.

In the County the Sheriff is obliged to select two jurors from each Barony.

The session of the Grand Jury was in public, a recent innovation that had the effect of reducing presentment of little public interest but favouring Landlords.

Another change he did not mention was setting up a panel of Cess players for each Barony who would be involved in the quarterly presentation to approve local works.  Those approved would then go to the Grand Jury for approval.  Those on the panel would typically be large Catholic and Protestatn farmers.

It is reported to him that in the entire country there is no Catholic Judge.

He makes frequent reference  to the Criminal Assized he attends at the frequent use of informers.  As a lawyer he objects as it saves a guilty man and provides a premium for false testimony.

In criminal cases in contrast to France he is amazed at the rapidity of trials.  The same man is often induced by the Grand Jury, found guilty by the Petty Jury and Condemned by the Judge in the course of an hour.

He also refers to the Court allowing policemen to tell the court of admission made to them by the accused.

There are a number of references to the Penal Laws excluding Catholics from owning property until 1782.  He frequently mentions that this has resulted in ambitious Catholics amassing vast fortunes.  In some cases they enter the land market and as Landlord seem as bad as the Protestants

The Missing man, Tim Healy and the Bantry Gang.

Bantry born Tim healy, MP, Barrister and later Governor General of the Irish Free State is a pivotal figure in the split in the Irish Parliamentary Party after the fall of Parnell,  In the works of James Joyce you would imagine he was the main culprit Joyce probably recycling tales told by his Cork born  father John Stanislaus Joyce,  a man heavily involved in poltics.

It is clear that from the time of Daniel O’Connel and the anti tithe agitation the Catholic Clergy had a hugely influential role in politics and the Land League.

Rev. Robert Anderson, BA, TCD, (1843-1890), Protestant Home Ruler, Land Leaguer,  unfortunately most of his congregation did not agree dn boycotted him he died at a young age leaving a young family in very poor circumstances.

Small and middling Protestant farmers will often appear on such lists as those subscribing to the Parnell Legal Indemnity fund and in the Durrus are joined the Catholic tenants in a rent strike on the estate of the Earl of Bandon in the 1880s during the Land War.

The only parishes where the name of the laity is given is Durrus and Kilmeen.  From those listed in Durrus it is possible to get a feel for their background and connections.

Two Richard Tobin and John O’Sullivan/Sullivan own their properties outright and have purchased them in Durrus from the Estate of the Earl of Bandon.  In both of their cases the family stretches back to the late 18th century.  John O’Sullivan family as miller’s and merchants and Richard Tobin either a grandson or great grandson of ‘King’ Richard Tobin an illiterate local fixer in Kilcrohane died c 1795, his descendant married into many of the local prominent families over a fairly wide geographical area.

Luke Canty, Clashado elected rural district councillor related to the Dillon family of Clashadoo, Durrus, Bantry and Skibbeereen that extended famu have hotels, pubs and draperies as well as land. One of the family is Dr. Sheehan, Bishop of Waterford.  In turn the Dillons are part of the Roycroft network from the borders of Durrus/Bantry that branch numbers Charles Roycroft Bantry born businessman and land owner, Magistrate Macroom, nationalist political activist.

Patrick Murnane, Letterlickey, Durrus.  The extended family are listed in the Landed Estate Sale of the Hutchinson Estate 1850s as having significant lease on the estate for the 1820s.

From the late 19th and 20th century onward descendants of these families achieved prominent positions in business, the professions and education and religious sectors.  There is significant intermarriage  within this class of people.  This can be picked up in detailed listing of funerals.

It is likely that this general patterns repeated in other parishes. 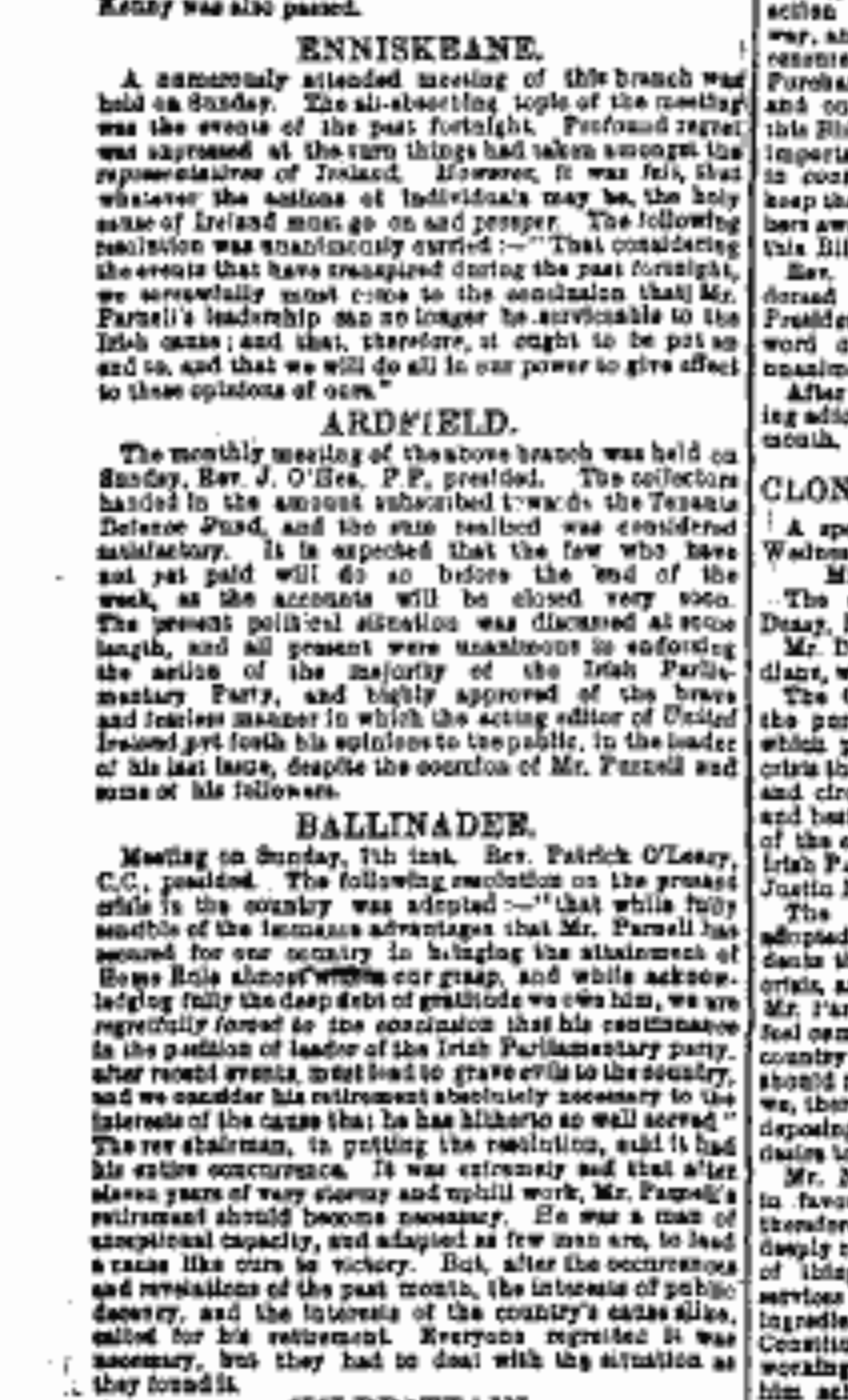 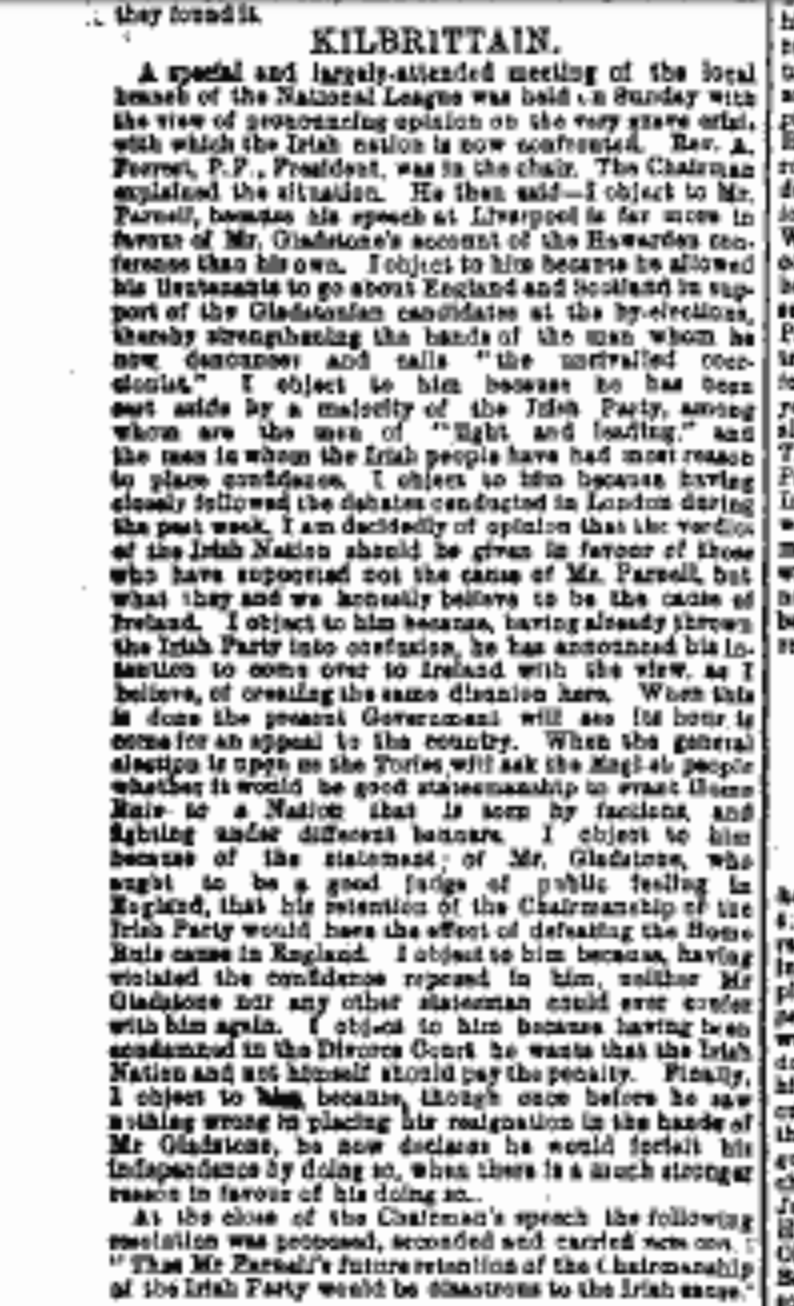