1941 One of The Saddest Episodes in the History of Bantry. Over 200 Men Queue Up to Work in England. Wartime Backdrop in The District. 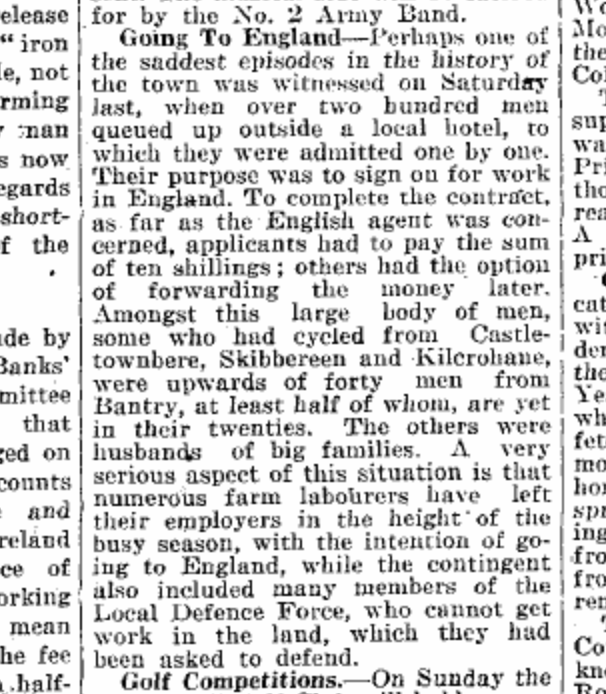 The end of the economic war was welcomed by farmers who now had an outlet for their produce on the British market. After war was declared there was a market for their produce. During World War One there was a huge increase in agricultural prices and consequential prosperity, but this time prices did not increase to the same extent. There was an outbreak of Foot and Mouth disease in 1941. The imposition of rationing of tea and other items entailed sacrifices, but not the hardship experienced in the war zone.  There was compulsory tillage, which was a percentage of tilled land and this continued until the end of 1947, much to the annoyance of dairy farmers.  Fertilizer was non-existent and sea sand, seaweed and sea wool was used.  In 1934 the railway to Courtmacsherry was threatened with closure.  It was stated that sea  sand from there landed by boat went to Durrus via Durrus Road Station.

There had been a subsidy in the 1930s from the Cork County Council for sea sand landed by boat or from the sea shore.

In the Bantry Fair of March 1940 the French Army had buyers for horses; they were seeking horses 5-7 years old and 15-16 hands in height.  In July of that year a young Jack Lynch was assisting at a sitting of the Circuit Court and was described as a native of the town, he had cousins in the Bantry area Baregorm.
There were few cars in the Parish at the outbreak of war, the Priest, the Minister, Chrissie O’Sullivan (later Mrs Leahy, they also had a small truck), publican Jim Hurley, Denis John L. O’Sullivan and P.J. Barry, both of whom operated a hackney service. In 1913 Miss Levis, daughter of Dr. Levis was one of the few car owners in Cork City and County. The train took 4 hours to reach Cork, coal was unavailable and the train stopped.

at each station to take on timber and turf. In 1940 road signs were dismantled. There was widespread hunger especially among those who did not own land and have the facility of growing their own food. There are stories of farmers giving flour from their own corn to neighbours in want.

In 1939 a chain of look out posts (LPOs) were built around the Irish coast and the one at Sheeps Head was no 31. There was an existing phone line to the end of the peninsula from British times This was manned by 7 operatives and an NCO.  It supplied information to military Intelligence (G2) who passed it onto the Department of External Affairs and from then to the British Military.  From October 1939 to March 1940 the south west coast was under surveillance by a British vessel masquerading as a trawler ‘Namura’ under the command of Captain Fell. The brief was to locate U-Boat refuelling bases alleged to be in the south west in popular mythology, none were found.

During the Emergency there was a series of directional markings at the end of peninsulas or on islands visible from the air around the coast. This was done at the request of the US as State Papers released in 1994 reveal.  At the end of the Muintervara peninsula there is one marked ‘EIRE’ in white stone.

The Luftwaffe High Command flew weather reconnaissance aircraft over the area and these were reported on by Sheeps Head LOP, and used the lighthouse at Dursey Island as a navigation buoy. The keepers got used to a Junkers plane that used to fly from Merignac near Bordeaux.  On the 23rd July 1943 the aircraft crashed on the island, killing the crew of 4.  It might be noted that in the National Library’s Photographic Archive there are photographs taken by the Luftwaffe’s aerial photographic wing of military barracks, the airport, railway stations and city centre of Dublin. In the photo of Cork Ford’s factory is prominent.  A German plane was hit by the Royal Navy’s S.S. Major C. and crashed into Cashelane Hill, Dunbeacon on the 5th February 1941, killing 5 of its crew and 1 taken as prisoners of war.  The army retrieved the explosives left behind the crash. Miss May Nugent, Derryfunchion, rendered assistance to the only survivor and was presented with a German Life Saving Medal by the German Minister in Dublin. Miss Teresa (Daisy) O’Mahony from Ahagouna was one of a number to view the wreckage, (she drank poisoned water and died soon after). The mangled wreckage of the plane was on display in the Courtyard of Bantry House.  A German airplane crash-landed on Mount Gabriel on the 3rd. March 1942 killing all the crew, they were interred in the Abbey in Bantry and weren later moved to the German war cemetery at Glencree, Co. Wicklow.

Local memory has it that on a number of occasions British Destroyers moored at Ahakista to get fresh supplies of meat and vegetables.

Gerald McCarthy (1912-1984) of Old Dispensary House son of Dr Michael McCarthy was a young insurance agent and farmer during the War.  During the war years he covered an extensive area from Kilcrohane to Ballydehob and Kealkil by bicycle.  He was an officer in the LDF (Local Defense Forces it was known at the time as the Local Security Force, LSF).  He kept a diary from 1940 to 1984  and he related the drill, night exercises and conferences held during the period. His LDF duties included guarding the German aircraft which crashed in Dunbeacon in 1941. There were major military manoeuvres in Bantry in August 1940 with armoured cars; Bren guns and the entirety of the grounds of Bantry House were taken over by camps for 800 troops of the 4th Battalion.  There was a company of soldiers (2nd Cycling Squadron) billeted in Bantry House.

On the first Friday of each month being Fair Day, a recruitment officer of the British Army (or possibly the civilian agency for recruitment of civilian employment in munition factories) came to the square

Gerald’s farming activities included a lot of time devoted to the growing of flax, as well as growing vegetables, potatoes and time spent saving turf. The flax was a labour-intensive crop and when pounded and scutched it was sold to buyers from the North of Ireland for £1 a stone.  A mill at Coonagh the remains of which are still visible on the Leap/Rosscarbery road did the preliminary processing. A number of farmers in the area grew flax including Jack Crowley, Ahagouna and Denis John L O’Sullivan of the village, but the main growing area was further east towards Clonakilty.  In 1945 there were 6,186 acres under the crop in West Cork and Drinagh Co-Op facilitated the sketching of flax.

The Government wished Parish Councils to be set up and in Durrus this happened in August 1940 and reports of it in the Southern Star show a concern about possible invasion. The Council was chaired by Father McSweeney and also involved were the Rev. Doherty and a wide selection of the local population

Many natives of the district emigrated to England, a number serving in the British armed forces; others worked in hospitals and factories. The Southern Star at the time in its news from Bantry carried regular reports of ‘Recent Departures’ and also casualties of locals killed on active service or in air raids in England. The scarcity of tea in particular is remembered; the ration was reduced to half an ounce from January 1942, it could be obtained on the black market in Bantry for £1 a lb.  The newspapers of the time also refer to a ‘tobacco and cigarette famine’. The late Bob Spillane, Ballycomane recalls that you were very lucky if you or 5 ‘shirleys’ (cigarettes) from the local shop. Times were hard and many would have had great difficulty but for credit advanced by shopkeepers such as Jackie Cronin and Chrissie O’Sullivan (Mrs. Leahy).  There was extreme hardship in the Kilcrohane district from the 1930s.  Timothy O’Donovan of Gloun who did well in the stock market and later in pubs in New York used to spend a few months back each summer.  Just before he left he would clear the slate in O’Mahonys shop of those without the means  of doing so.

Jacky Cronin used to go to Cork with a truckload of pigs and return with fresh bread.  He was from the Cove, Kealties and was one of the first entrepreneurs in Durrus, he later had two trucks (technically they were in the ownership of his mother Bridget who had a store at the Cove) and built a hardware store and mill opposite Driscoll’s garage.  There are now houses on the site.  He married Anna Barry, daughter of PJ Barry who ran the pub.  His son Kevin started the Durrus Ironworks Company. In this era, Bernie O’Leary showed films in the village hall once or twice a week.

1 thought on “1941 One of The Saddest Episodes in the History of Bantry. Over 200 Men Queue Up to Work in England. Wartime Backdrop in The District.”