The period before and after in the district was marked by a split on the Nationalist side between 2 factions one of which was the United Irish League.

Jack Dukelow, 1866-1953, Brahalish and Others Charlie Dennis Poet, Batt the Fiddler, Canon McManaway smuggling horseshoes stubs into the Free State and others stories:

In November 1901 a Splendid Public Demonstration was held on the Outskirts of the Quiet little Village of Durrus to Establish a Branch of the United Irish League in the Parish. 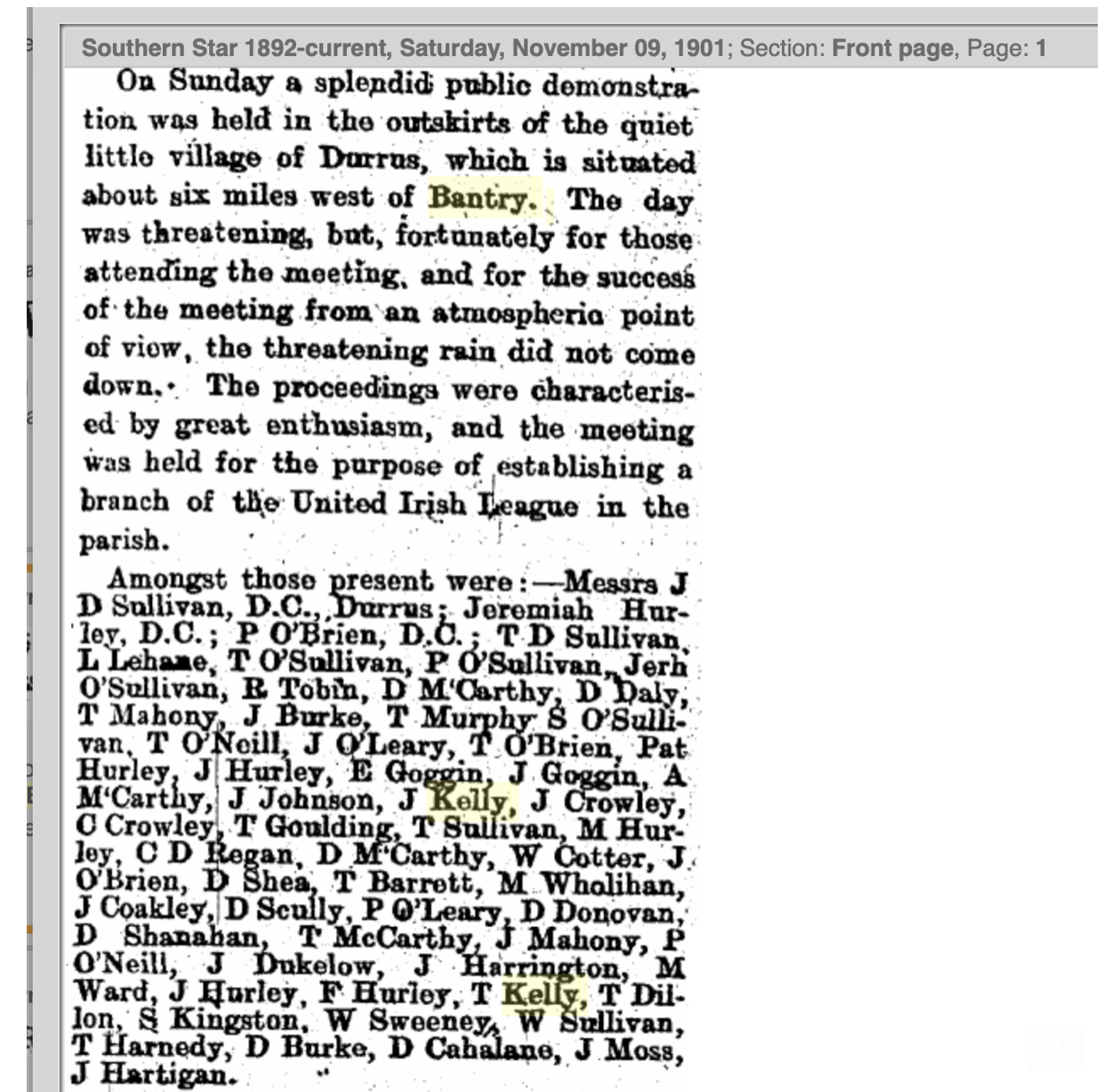 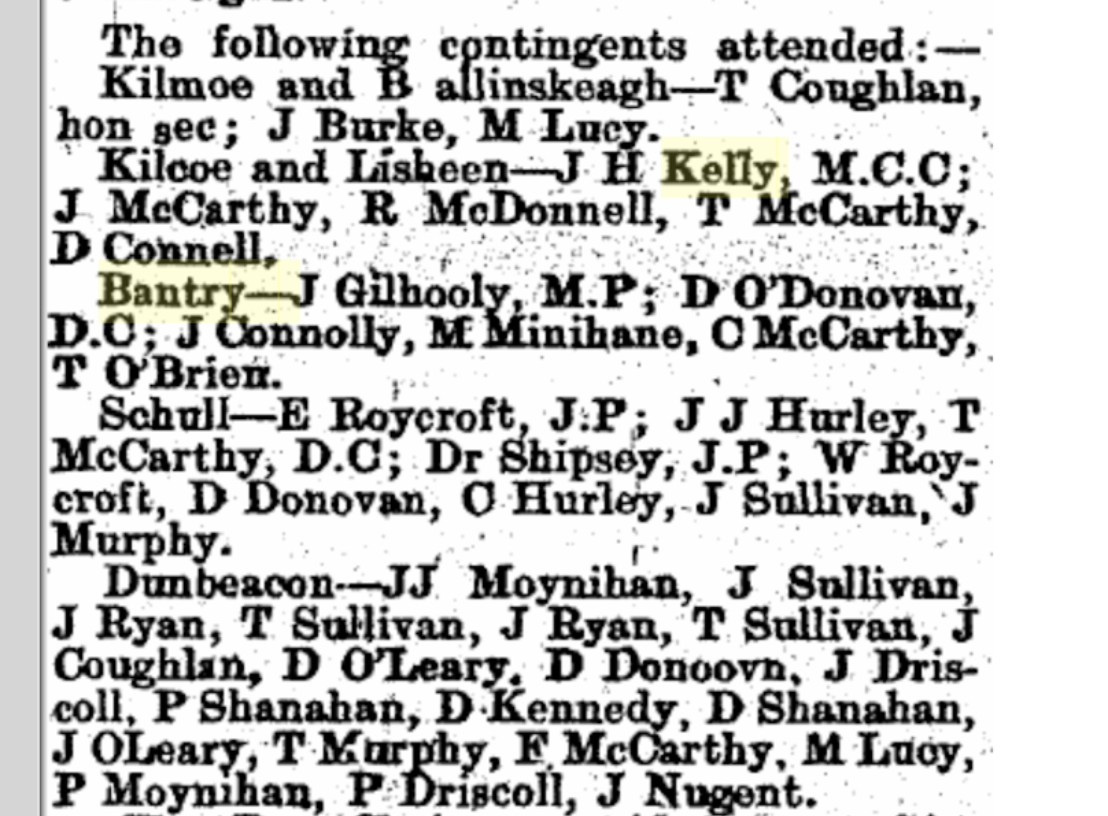 James Gilhooley MP (1847-1916) was a publican and draper in Bantry, and was jailed under the Coercion legislation during the Land War 1880s.  He was elected to Parliament and kept his seat in each succeeding election until his death. Evidence was given by the Clerk of the Carrigbui Petty Sessions in a case in Bantry that Gilhooley had the licence of a public house in Durrus which was held on his behalf by his sister Agnes.  On the Parnellite split he opposed Parnell and later joined the faction led by O’Brien and known as the All for Ireland Party (AFIP). There was a public meeting in Durrus which founded the United Irish League in November 1901 which he and fellow MPs Crean and Flynn addressed.   Among the attendance were J D Sullivan DC, Jeremiah Hurley DC, J Dukelow, T Dillon, S Kingston, J Moss and numerous others. The parish priest who chaired the meeting recalled the bad days of 1881-1886 for the people of Muintervara and had no doubt that by Christmas of that year the vast bulk of the parish would be members of the United Irish League.

Gilhooley addressed an enthusiastic meeting in Durrus on January 1910 presided over by Mr. John D. Sullivan.  Bonfires were lit in the street, it was market day in the village and large numbers of country people were present.  Mr Gilhooley contested the two elections in 1910 as an Independent, supporting O’Brien; his opponent was Mr. O’Leary, Ahakista Cottage, the U.I.L. (United Ireland League/Redmondite) candidate. Gilhooley had support in Durrus in this election and his opponent was strong in Kilcrohane. His election agent was Jasper Woulfe, Solicitor, later Crown Prosecutor and TD, Skibbereen.  He would later be an Independent TD for West Cork.   Gilhooley up to this time had been elected unopposed for 18 years.  In the later election of 1910 there were disturbances in Bantry, when rival factions fought, some coming from Cork; over a two-day court hearing, 45 were prosecuted for riotous behaviour. In September 1910 a case of assault was brought at the Petty Sessions by Patrick Burke, Coomkeen.  He alleged that while leaving Kilcrohane with his niece driving a trap he was set upon by three locals Arundel, Donovan and Donovan shouting ‘Up the Mollies’ they were convicted and bound over to the peace.

In the election in December Gilhooley had the use of two motor cars to bring constituents to the polling station.  On examining the type of questions raised by Mr. Gilhooley at Westminster, one is struck at the similarity with those raised by a typical country T.D., at Dail Eireann. Gilhooley attended a monster meeting in Bantry in 1888, attended by 5-6,000 people, to set up a branch of the United Traders Association and Industrial League, to promote the purchase of Irish goods and the boycott of English goods.  There is a memory of fish sellers from Gearahies coming to Durrus to sell fish and roaring ‘up the Mollies’ in connection with political controversy at that time this was probably the second election of 1910, when emotions were inflamed.  In the February 1910 election there were 326 votes cast out of 407.

There were disturbances in Durrus in January 1911 between ‘Redmondites’ and ‘All for Irelanders’ and a force of between 8 and 10 policemen were unable to quell the disturbances which lasted for over an hour, the main street was regarded as unsafe to traverse.  Tension continued into September 1911 at a court hearing in Bantry into those entitled to be on the electoral register.  Mr O’Leary in his dual capacity as a Barrister and potential political representative opposed the inclusion of various people in Durrus as they allegedly did not meet the governing criteria.