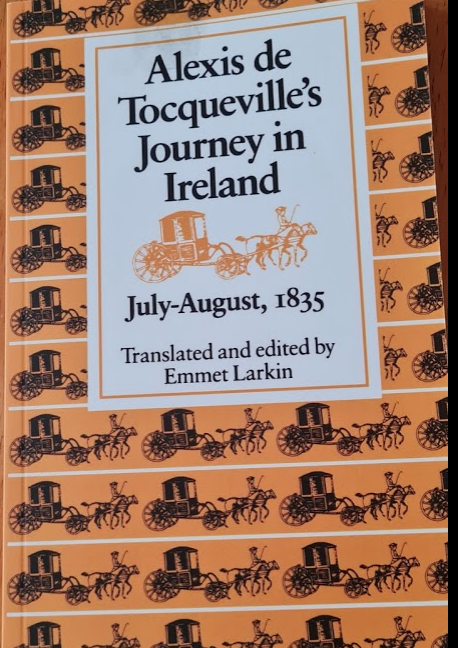 Remains of Protestant Denomination in Cork

A frequent narrative is the imposition of a server yok by Irish protestanr on the Catholic who vastly outnumber them.  In the Case of Cork city he says that in 1835 there were 80,000 Catholics out of a population of 107,000.  All the officers of the Corporation are Protestants.

In the County the Sheriff is obliged to select two jurors from each Barony.

The session of the Grand Jury was in public, a recent innovation that had the effect of reducing presentment of little public interest but favouring Landlords.

Another change he did not mention was setting up a panel of Cess players for each Barony who would be involved in the quarterly presentation to approve local works.  Those approved would then go to the Grand Jury for approval.  Those on the panel would typically be large Catholic and Protestatn farmers.

It is reported to him that in the entire country there is no Catholic Judge.

He makes frequent reference  to the Criminal Assized he attends at the frequent use of informers.  As a lawyer he objects as it saves a guilty man and provides a premium for false testimony.

In criminal cases in contrast to France he is amazed at the rapidity of trials.  The same man is often induced by the Grand Jury, found guilty by the Petty Jury and Condemned by the Judge in the course of an hour.

He also refers to the Court allowing policemen to tell the court of admission made to them by the accused.

There are a number of references to the Penal Laws excluding Catholic from owning property until 1782.  He frequently mentions that this has resulted in ambitious Catholic amassing vast fortunes.  In some rence tcse thy enter the land market and as Landlord seem as bad as the Protestants

John Sandy Bird.  Cess payer representative. North St., Bantry.  Signed 1833 Memorial to departing CAPTAIN JONES, LATE IN COMMAND OF A DETACHMENT OF THE 69TH REGT., STATIONED AT Bantry.  1838 Address to John S. Bird, on Retiring as Treasurer of Bantry Dispensary he owned the premises from which it operated, report later scathing on operation of dispensary.

John Brian Corkery, farmer, businessman, Snave, Bantry, 1825 subscriber to Father Quin, Durrus church building.  In multiple deeds as witness 1820s.  Mr. Corkerry and Mr. O’ Connell – two prominent merchants of the eighteenth century? I wonder where they were? It might have been somewhere about the Mills by the Quays as they are commented on as having big businesses on the way into town by an antiquarian travel writer.  Cess payer representative 1834.   Lewis comments on his large stores. Voting for Daniel O’Connell as £50 leaseholder 1841 Cork Election.  1841 unable to attend business transferred several properties in trust to John Barry, Bantry and Rev. Christopher Freeman for the benefit of his wife Anne and daughter Margaret and sons Patrick and Daniel.

William Murphy, Adrigole, Cess payer representative, Vote in 1841 election based on £20 freehold at Kilcaskin, Inchintaglin and Dromlane.  The name appears 1856 as a Grand Jury Contractor.

Daniel O’Sullivan Esq., Reendonegan.  1822 Pigott, Gent. Cess payer representative, Pigot 1824. Paid up Bantry Member Catholic Association 1825. In 1794 Timothy O’Donovan. A Landlord  of the Ardahill, Kilcrohane, branch was born and married Mary daughter of Daniel O’Sullivan of Reendonegan House, Bantry and Hanora O’Connell.   She was the aunt of Daniel O’Connell who secured Catholic Emancipation in 1828.  Signed 1833 Memorial to departing CAPTAIN JONES, LATE IN COMMAND OF A DETACHMENT OF THE 69TH REGT., STATIONED AT Bantry.  Cess payer representative, Barony of Beara 1834.  Vote in 1841 election based on £50 freehold at Farrannamagh, Kilcrohane.

Roger O’Sullivan Cess payer representative.  1827 Commissioner with John Lavellan Puxley to determine tithes of parish of Kilnamanagh.  Associate of Patrick O’Sullivan whose evidence to a Parliamentary Enquiry into the Cork election and its widespread violence of 1841 comes across as a Chieftain of his area. Usually he brought tenants and middlemen to Cork via Bantry  in his sloop. Except for Roger O’Sullivan and Symms both Protestants who was married to a Sullivan they were Catholic and normally would have voted for the Liberal/O’Connell interest. However they all voted Conservative Longfield/Leader, the suggestion in the questioning that he had used undue influence to please Lord Bantry which he rejected.  KILACONENAGH – Lewis’ Topographical Dictionary 1837 –  a parish, in the barony of BERE. The principal seats include  Sea-point, of R. O’Sullivan, Esq.

Purchased Carriganass from David Mellifont, Donemark in 1817 for £250 and £50 rent previously had been tenant with Maurice Flynn. Hamilton White had left, in his will, cash sums to Richard Blair Esq., Galway (nephew from Blairs Cove, Durrus), who had received various lands in lieu. By this deed Blair assigned these lands to William O’Sullivan, Carriganass in 1822.  1825 took assignment from Godwin Young, hatter Cork (from Bantry) of debt owing 1807, judgement, by Simon White, Glengarriff Castle.

Has 500-600 acres from Kenmare Estate. Subscriber 1832 Bantry poor Relief. Decried by Assistant Magistrate for rapacious behaviour toward tenants ‘God help the tenants of the Country with Such landlords’. Enduring bad feeling with McCarthy Downing Skibbereen Solicitor.  Accused of being agent to Sir William Draper.  Son William Junior probably TCD admissions 1834, aged 16 educated Dr. Hamblin, Cork, William called to the Bar 1844.  Signed Testimonial to Resident Magistrate, John Gore Jones, Bantry, 1844.  In 1848 seizing cattle at Scart, Bantry for alleged overdue rent to his father with Daniel, John and Cornelius Manning and Eugene and Stephen Sullivan he was imprisoned for 3 months and fined £20 for assault.  Son, William, Barrister,  made a Magistrate 1850 on recommendation of Earl of Bandon superseded after two days.  Prosecuted in Cork for criminal libel.   Daughter married Barrett who took over the estate.  According to John Windle he contemplated the restoration of Carriganass Castle.  Brother Jeremiah in Brennymore, Kealkil his daughter married Portuguese Captain Jose Biaia later resident in Kealkil. 1854 large farm at Kilcrea with quarry to let apply William O’Sullivan or Daniel O’Sullivan, Church St., Cork.  Complained that in 1840 his lease of Ards (2 very large farms 3 miles inland) was not renewed by Lord Kenmare. This lease commences in 1756 between William Sullivan, an attorney who married the daughter of Rev. Schofield who had the lands.  The lives in a lease for three lives of Richard Cox, son of the Archbishop of Cashel, and Richard and George sons of Sir Richard Cox of Dunmanway at a rent of £52.  Grandson  QUILL, Albert William, in occupation pre 1908.  He has dealings with Eugene O’Sullivan, of Ballaghadown Caheragh, a Protestant, Church Warden, Drimoleague and who sells an interest in Caha lands rented from Shouldham Estate. There may be a relationship as William O’Sullivan acquired part of Hutchinson’s lands at Durrus it is likely that Hugh Hutchinson who died young 1804 wife Margaret O’Sullivan was a sister of Eugene O’Sullivan. 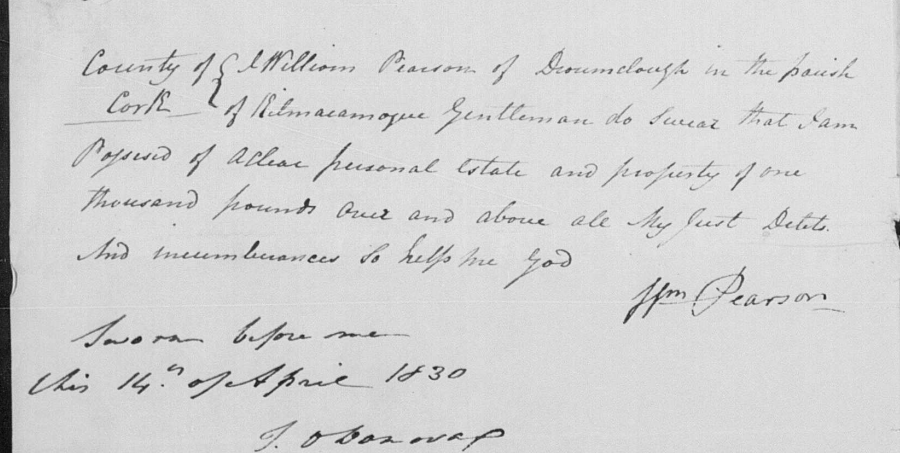 William Trenwith, Cess payer representative, probably of Faha may be man alleged to have had 23 daughters.  Family appears in 1659 census at Gurteen, Thomas Trenwith though a Protestant allied to O’Sullivan against Puxleys in 1732 proclaimed an outlaw £100 offered for his capture.  Middlemen of White and possibly Kenmare Estate.  Of  extended family Richard a butter buyer/inspector and property owner in Cork, Emanuel, linen draper Cork.  Intermarried with Helens, pawnbrokers of Bantry and Cork, O’Sullivans of Tedagh, O’Sullivans of Beara, Wards of Moulivard, Durrus among others.  1831 surety for Robert Clarke, postmaster, Bantry with Young Lavers (Levis)

James Vickery (1760-1842), Mollock, Parish of Durrus, Cess payer representative.  According to family lore a wild man in is early years converted and became a leading light in Methodism in Bantry.  Married 1790, Ellen Warner, Upper Gurteen,  (1776-1837), described as ‘Gent’. in marriage settlement The Methodist preacher Rev John Rogers stayed with James in Rooska in July 1803 coming from Gorey and preached there and the next day in Bantry. At Dunbittern at William Vickery’s ‘there were no people to hear’ and he then preached twice and spent the night in John Skuce from his unpublished diaries M.E. Haskins. Looked after his grandson and his sister 1830s where their parents died of cholera in Skibbereen.  His grandson James Stanley Vickery (1829-1911) became a successful businessman in Australia and wrote a memoir of his time with his grandparents.  His son in law Samuel Levis, a cess payer representative, tithe proctor, Baronia Constable successful businessman Skibbereen, Glenview.

Samuel Vickery, Moved 1840 to Reendesert, emigrated 1850 with most of his family to Evnsville, Indiana, USA.  His son Samuel reminiscences.

William Warner, Reendesrert, 20 shillings, freehold 1829 – APPLICATIONS FOR THE REGISTERING OF FREEHOLDS BARONY OF BANTRY,  1841 election tendered for Longfield and Leader as £20 freeholder.

Reenmeen (Glengariff): Presentment Sessions  for Barony of Beer (as spelled):

Timoleague: Presentment Sessions  for Barony of Ibane and Barryroe:

In the 18th and 19th century public works were carried out under the presentment system, a list of works was approved by Magistrates sitting twice a year in each Barony and went forward to the Grand Jury at the twice yearly Assizes in Cork.  The funding was by the cess about 12% of rent collected by Baronial Constables who received a proportion of the yield.

In this Barony of Bere if anyone had information of those highlighted I would appreciate feedback By 1830 due to allegations of widespread abuse by landlords the system was modified to include local cess payers were consulted at the Presentment sessions.  So far they have largely been under the radar but they are people of major local influence.  In West Cork they comprise a class of large farmer Cathlic d Protestants  who often have links to the Grand Jury contractors.