The format of the surnames is different to that now used.

1595-6, multiple O’Mahonys included Bandon and Mizen area, McCarthys, O’Donovans, Crowleys, from page 204.  Thanks to John Hallisey for drawing attention to this.

Records listed below abstracted by John T. Collins, Cork Historian in the 1930s. 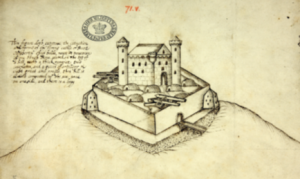 Digitisation has transformed how we practise family history. There are over 120 million Irish historical records on-line. It is now possible to trace and document Irish families to a much earlier date. This has led to renewed interest in early modern records, 1500–1700. One series of particular interest and use to family historians are the Tudor Fiants.

A ‘fiant’ was a warrant by the deputy or council to the Irish Chancery to prepare letters-patent—published written orders to convey a right, an office, title to property or a pardon. The Fiants are statements of command. The term comes from the first word of the customary opening protocol in these documents: Fiant litterae patentes (‘Let letters patents be made’).

The Irish Fiants don’t survive as a series until Tudor times. (The medieval chancery warrants have survived in sufficient quantities that Irish fiants are one of the ‘categories of substitute material’ used by TCD’s CIRCLE project to reconstruct the rolls of the medieval Irish Chancery.) From 1875, Calendars of the Irish Fiants from 1521 to 1603 were published in the Reports of the Deputy Keeper of the Public Records Office. In 1994 this material was compiled into four volumes and re-published as Irish Fiants of the Tudor sovereigns (De Búrca, Dublin).
Even though the Tudor Fiants are widely available to researchers, they remain an under-used source. Yet they provide detailed evidence for family historians who want to trace Gaelic and Old English families, or to delve into the origin and history of family names and place-names in Ireland.

The Tudor Fiants contain over 120,000 named individuals in Ireland, and provide additional corroborative detail, including status or occupation and usual place of residence. The level of detail recorded in each fiant makes it possible to trace individuals and to identify place-names often to within a present-day parish or barony.
The Fiants document the population beyond the ‘body politic’ of gentry and aristocracy. Coverage is mainly, though not exclusively, of adult men. In addition to the great families that are documented in other sources, the Fiants include aldermen, merchants and artisans in the towns, and yeomen and husbandmen in the countryside. While some fiants include the names of men described as cottiers and labourers, as a rule of thumb these were usually encompassed in the catch-all phrase ‘all other persons inhabiting the country’.

In the late 1500s we find a huge increase in the number of Fiants for Pardons issued. Evidence suggests that these lists of names were compiled from schedules of followers sent in to the council. When you find a name relevant to your research, always look to see who else is in the same group. Researchers can use this evidence to recreate factional groups within a lordship, as well as the lord’s own following, including his military retinue of gallowglass, kerne and horseboys. A particular feature of the Fiants for Pardons is the use of double and even treble patronyms in personal names, to identify the named individual’s grandfather or great-grandfather. With this detailed evidence, it is possible to separate out an individual from his doppelgänger, even when they have a common Christian name. Researchers can also construct distinct lineage groups within an extended family.

Kenneth Nicholls has made extensive use of the Tudor Fiants to recreate family histories of Irish lordships, including Kavanagh and MacCoghlan of Delvin. Nicholls is the only person I’m aware of who has used the Fiants to document individuals moving between different townlands within a joint-lineage landholding (The O’Duinn Manuscript, Irish Manuscripts Commission, 1983).

Calendars of Fiants for the reigns of James I and Charles I were also compiled, but never published. Handwritten copies of these Calendars are available in the National Archives of Ireland. These later series of fiants use a lot of textual contractions and require some interpretation.

Fiona Fitzsimons is a director of Eneclann, a Trinity College campus company, and of findmypast Ireland.