At that time the electorate was small in the low thousands for Co. Cork.  Voting was open it was not until the 1870s that the secret ballot commenced.  Newspapers covered the elections listing the votes for each count.   There was frequent litigation and election petitions as only a handful of votes could be critical in a candidate securing election. From the 1820s the fault lines of Co. Cork politics emerged as broadly Liberal/Catholic/Liberal Protestant and  Conservative/Protestant/Landed/Professional, Catholics.

In making application to register for voting in some circumstances it was necessary to avail of a rent charge.  This often fixes the ancestral areas from where a family came from. Sometimes the newspapers carry reports of these applications before the Assistant Barristers at the Quarter Sessions.

The electoral procedure was coordinated by the Clerk of the Crown (State Solicitor).

The London School Board election of 1870 was the first large-scale election by secret ballot in Britain.

The secret ballot was eventually extended generally in the Ballot Act 1872, substantially reducing the cost of campaigning, and was first used on 15 August 1872 to re-elect Hugh Childers as MP for Pontefract in a ministerial by-election following his appointment as Chancellor of the Duchy of Lancaster. The original ballot box, sealed in wax with a liquorice stamp, is held at Pontefract museum.[10] The use of numbered ballots makes it possible, given access to the relevant documents, to identify who has voted for whom. 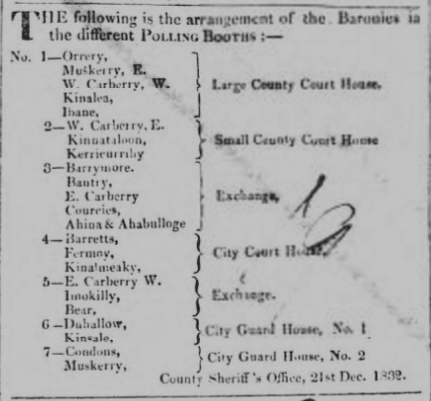