1866, Death of Appirator, Dick Neal (1799-1866) and Bellows Blower, for 54 years to Cathedral of St. Finbarrs, Cork, Remembered the Graves of the  Young Man who fell from the old Steeple Putting up the Cock, Mr. Voster the Arithmatician m 1779, West Digges The Comedian 1786, O’Brien The Irish Giant Interred in Two Graves To Escape the Doctors Who Eventually Got At  Him.

The office of Appirator was an official one mentioned in Parliamentary Reports.

Arithmetic in Whole and Broken Numbers Digested After a New Method, and Chiefly Adapted to the Trade of Ireland. to Which Are Added, Instructions for Book-Keeping. with the Dignity of Trade in Great-Britain and Ireland. Extracted from the Mercantile.

Actor-manager. Son of Colonel Thomas Digges of Chilham Castle, and Elizabeth West, daughter of the 6th Earl De La Warr. Quite the ladies’ man, Digges in 1746 married Mary Wakeling and later had two common-law relationships with actresses Sarah Achurch Ward (from ca. 1752 until 1758) and George Anne Bellamy (from ca. 1761 and onwards), fathering up to six children.

Digges received his early education at Westminster School, London which he left in 1740. He became an ensign in Colonel James Long’s Regiment of Foot (in January 1741) and later (in June 1744) in Colonel Richard O’Farrell’s. He left the army in 1749, and shortly after began his acting career. His first stage appearance was in Venice Preserved at Thomas Sheridan’s Theatre Royal in Dublin (1749). He continued to act, although with some breaks, in Dublin until 1756 when he moved to Edinburgh and became actor-manager of the Edinburgh Theatre (a.k.a. the Canongate Concert Hall). Often in debt and unpopular with his creditors, he moved around a lot for the remainder of his life, appearing at various times in Dublin, Edinburgh, London, Cork, Limerick, York and Liverpool.

He retired from acting in 1784, after having suffered a paralytic stroke during rehearsals for a new staging of Venice Preserved at Dublin’s Theatre Royal – the same play and the same theatre in which he had had his theatrical debut 35 years before.

Patrick Cotter O’Brien (19 January 1760 – 8 September 1806) was the first of only thirteen people in medical history to stand at a verified height of eight feet (2.44 m) or more. O’Brien was born in Kinsale, County Cork, Ireland. His real name was Patrick Cotter and he adopted O’Brien as his stage name in the sideshow circus. He was also known as the Bristol Giant and the Irish Giant.

It is believed he died from the effects of the disease gigantism.

No hearse could be found to accommodate his nine feet four inch casket encased in lead, and his remains were borne to the grave by relays of fourteen men. In his will, Cotter left £2,000 to his mother and a request that his body be entombed within twelve feet of solid rock (to prevent exhumation for scientific or medical research).[1]

In 1972 his remains were examined and it was determined that, while alive, he stood approximately 8 feet 1 inch (246 cm) tall. This made him the tallest person ever at that time, a record that would be surpassed by the next ‘eight-footer’, John Rogan, who died almost a century later. Patrick Cotter’s giant boots are on display in the Kinsale Museum.

An arm of Cotter’s is currently preserved in the Medical Museum of the Royal College of Surgeons, London. 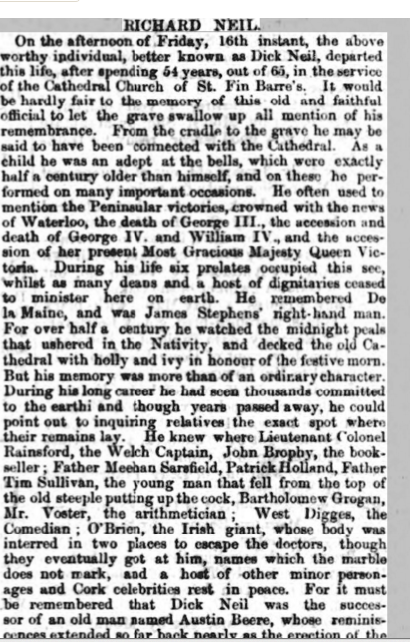 2 thoughts on “1866, Death of Appirator, Dick Neal (1799-1866) and Bellows Blower, for 54 years to Cathedral of St. Finbarrs, Cork, Remembered the Graves of the Young Man who fell from the old Steeple Putting up the Cock, Mr. Voster the Arithmatician, West Digges The Comedian, O’Brien The Irish Giant Interred in Two Graves To Escape the Doctors Who Eventually Got At Him.”