1700.  Claims Entered of Lands Forfeit by Rebellion, in Baronies of Bere and Bantry   and Carbery, West Cork with Chichester House, Dublin.

The English inserted a veneer of Legality on the forcible seizure of Irish lands with  the Chichester House apparatus from 1700.  One Estate which succeeded through the process was the O’Regan Estate outside Leap which remained in the extended family until the Land Acts in 1905.

There are references to the Townsends , in at least one instance they held land in trust for the O’Heas in Barryroe.

Chichester House was opposite Trinity College Dublin on the site on a old Nunnery.  It was  later demolished to make way for the Irish Parliament and is now the band of Ireland at College Green.

In relation the White claimant tis is the extended Lord Bantry family.  The wives name Sheehy adds to Bantry Historians belief that  the Whites came from Co. Limerick not the invented spurious Genealogy they conjured  up  in the early 19th century.

The Browns are referred to, as Catholics (Kenmare Estate) it is remarkable that the Estate survived as there were three generation where only one male heir was born.

The Galweys were major losers but again their survival is  remarkable.  One one Estate outside Macroom The Hedges Eyre granted a favourable Lease held in trust by Thornhills.

They were also agents to the Shouldham (half McCarthy) estate, Dunmanway and the the Kenmare estate. 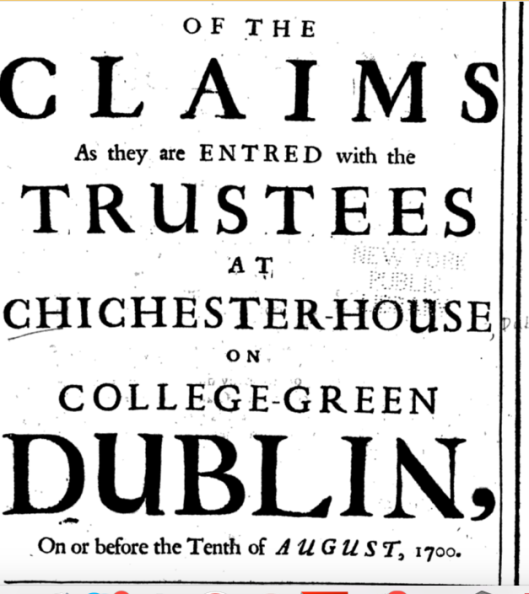 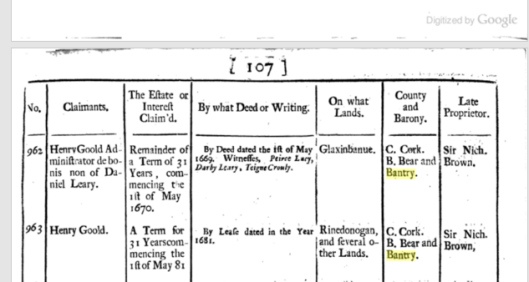 3 thoughts on “1700. Claims Entered of Lands Forfeit by Rebellion, in Baronies of Bere and Bantry and Carbery, West Cork with Chichester House, Dublin.”