From Pue’s Occurrences, Death January 1756, of Owen McCarthy Otherwise Distinguished by name of Owen a Verely, An Eminent, Tho Homebred Poet, Historian and Herald, in Which Superior Knowledge and Singular Talent rendered him a Very Agreeable to such as had the Happiness of his Company and His Death is very much regretted and lamented by His Acquaintances and Death of Rickard Donovan, Attorney.

While the Donovan death took place in Dublin lodgings given his Christian name common in West Cork Donovans it is likely hie is connected with the general family. 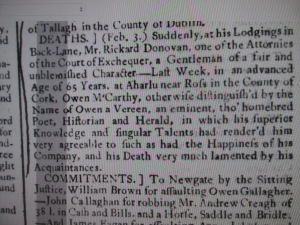 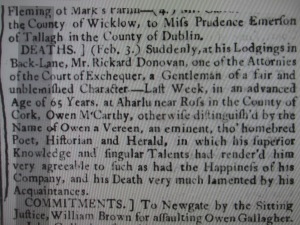