Commencement of the building 1870s of the Modern ‘Traditional’ Farmhouse in West Cork.

The farmhouse we regard as traditional, two storey slated, three windows on the upper floor two: one either side of the door, dates from the 1870s. A sign of the increasing affluence post famine.

The Valuation Office records post 1850 based on the Griffith Valuation record the change in occupier. Sometimes a marginal pencil entry shows the building of a new farmhouse. It is common for a comment to show an old farmhouse often in the farmyard being used as an outbuilding.

It was common on even larger farms to have a one storey thatched house right in the middle of the farm yard.

For smaller farms the historical Ordnance Survey of the 1830s shows patterns of ‘clacháns’ clusters of houses most of which were decimated in the famine.

The Bandon Estate Records sometime also record after 1850 the building of new houses.

The example here is of the Daly family in Crottees new house from the 1870s: 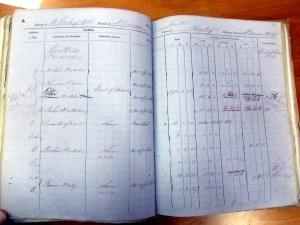