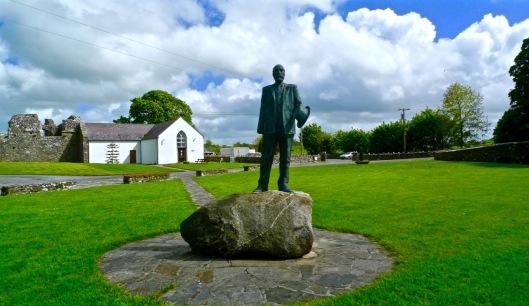 Straide, Co Mayo – Michael Davitt’s statue outside the museum dedicated to him

On our recent travels in Mayo we chanced upon a little museum in a rural situation. I was fascinated by the setting: housed in an old church adjoining the ruins of a 13th century abbey (which itself has some fine medieval carvings). The church has been restored specifically to accommodate the museum, which tells the story of Michael Davitt – who was born close to the site of the museum in 1846, and was buried right behind it in 1906.

Sixty years: a relatively short life – but years filled with remarkable achievement pursuing the causes of basic human rights and of freedom for Ireland. Years filled, also, with considerable hardships.

The village of Straide, in County Mayo, was hard hit by the famine – The Great Hunger – when Michael was born: a disaster that…