He was also a Genealogist. In the letters to Dr. John O’Donovan (Graves Collection, Royal Irish Academy) from various members of the O’Donovan Sept re their shared Genealogy with the Doctor, some are scathing about his alleged attempts to doctor genealogy to curry favour with Lieutenant Colonel O’Donovan, ‘The O’Donovan’ in suppressing the alleged illegitimacy of a 17th century ancestor. 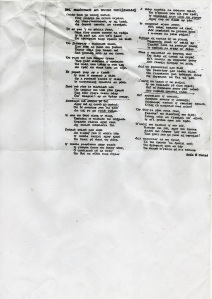 4 thoughts on “Machnamh an Duine Dhoilíosaigh (The Melancholy Man’s Reflections), Seán Ó Coileáin, (1754-1817) (John Collins, The Silver Tongue of Carbery), and his Manuscripts.”