He reckoned that Bob Triggs descended from an English Utilitarian Itinerant Minister who landed in Beara and married a Cronin woman.

The obit refers to his papers in the Cork Archive.  In each box are multiple files and folders often scraps of information in a hand very difficult to decipher.  The cross referencing is truly amazing going from the 12th century to just a few years before.   He had a particular interest in the various Septs of the Beara O’Sullivan family and was in contact with such Historians as Basil O’Connell a descendant of Daniel O’Connell the compiler of the O’Connell Tracts.

The papers are currently under the excellent care of the Cork Archives in Blackpool.

Sometimes the papers contain oblique references to the difficulty of doing business in the stagnant Ireland of the 1940s and 50s the stasis of Government bodies such as when he refers to the White Elephant of the Schull Ice Plant and how happy he was to have left the business of trawler owning.

His correspondence with fellow historians sometimes contains  phrase which in these time jar.  This would include families ‘perverting’ to mean Catholics converting to the Church of Ireland due to the Penal Laws or on marriage.

In around 1960 a Colonel Syms of South Carolina asked him to check out various strands of the West Cork Syms/Syms families and went onto describe how he was involved with the Friendly Sons of St. patrick and led the St. Patrick’s Day Parade in Savanna leading the Fighting 64th.  Paddy was perplexed as the Symms were a Planter family.  This view would now probably be archaic as those world wide of  a Cork Protestant background would look to their ancestral home-place without the baggage of mid 20th century Ireland.

The obit by Paddy Madden/Padraig O Maidín, County Librarian put it well.  His papers are a resource when investigated and collated and hopefully digitised will be a resource  for Cork related themes for aeons into the future.

At his own expense he commissioner engineering surveys of the Old Garryvucha and St. Finbarr’s Graveyard in Bantry. 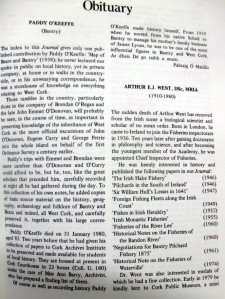