Of around 415 listed here, in the first instalment there  are about 150 where details of the individuals are given.  Where they are from a landed background detail of how the estate came about are given with some genealogical information.  This relies heavily on earlier work in The Magistrates of Cork and The Cork Grand Jury.  At  the culmination of this process it is intended to list those indicating those  who assisted together with institutions and sources.

Of approximately 415 of those listed, including 15 Lords, Bishops, 80 are Magistrates, 32 Clergy of the Church of Ireland excluding Bishops who are at the top table with the Nobles.  Also 6 of a medical background, 4 legals.

Descendants of Richard Boyle the Great Earl of Cork and associated families are strongly represented by the Brodricks of Midleton, Cotters, Roches, Shannons, and  a significant number from around Youghal.

A lot of the arcane offices represented:

These offices were a legacy of the English conquest and land confiscations and plantations  post unsuccessful ‘rebellions’. The bulk of these offices were swept aside in the local government reforms of the 19th century culminating in the establishment of Cork County Council and Cork Corporation in 1899.

Until 1869 the Church of Ireland was Ireland State Church although in 1800 it only represented about 12% of the population.  Apart from religion it performed important civic functions now done by public bodies or voluntary organisations.  Included here are probate, the regulation of marriage, education and at local level through the select vestries, road maintenance, elements of taxation, care of foundlings, burial of indigent dead, and in the time of the French Invasion the imposition  of local levies for the militia or compensation raised locally in lieu.   Senior clergy were habitually appointed as Magistrates and administered what at the time passed for justice with fellow magistrates mostly local landlords.

Not the case here but  some Bishops sat in the Irish House of Lords.  Here we have a multiplicity of Bishops, Deans, Vicar General Rectors, Clerks.

Among the families who benefited are:

There are many here  with names of Gaelic or Norman origin, members of the Church of Ireland whose ancestors had to convert because of the Penal Laws.  The Convert Rolls list over 50,000.  This involved the public humiliation of appearing in public in a Church of Ireland Church and public renouncing the ‘Errors of Rome’

One family appearing and whose ancestors appear elsewhere are the Coughlans of Carrigmanus on the Mizen peninsula.  They fell out with their overlords the O’Mahony family about 1600 fell in with Richard Boyle (The Great Earl of Cork) and the Hulls and converted to the Church of Ireland .  They are ancestors to Princes Harry and William of England, their mother Lady Dianna Spencer’s grandmother Lady Fermoy (Roche) had Coughlan ancestry.

Among the names are the De la Cours, quite a number of families such as the Evansons of Durrus have spouses from a Huguenot family background. 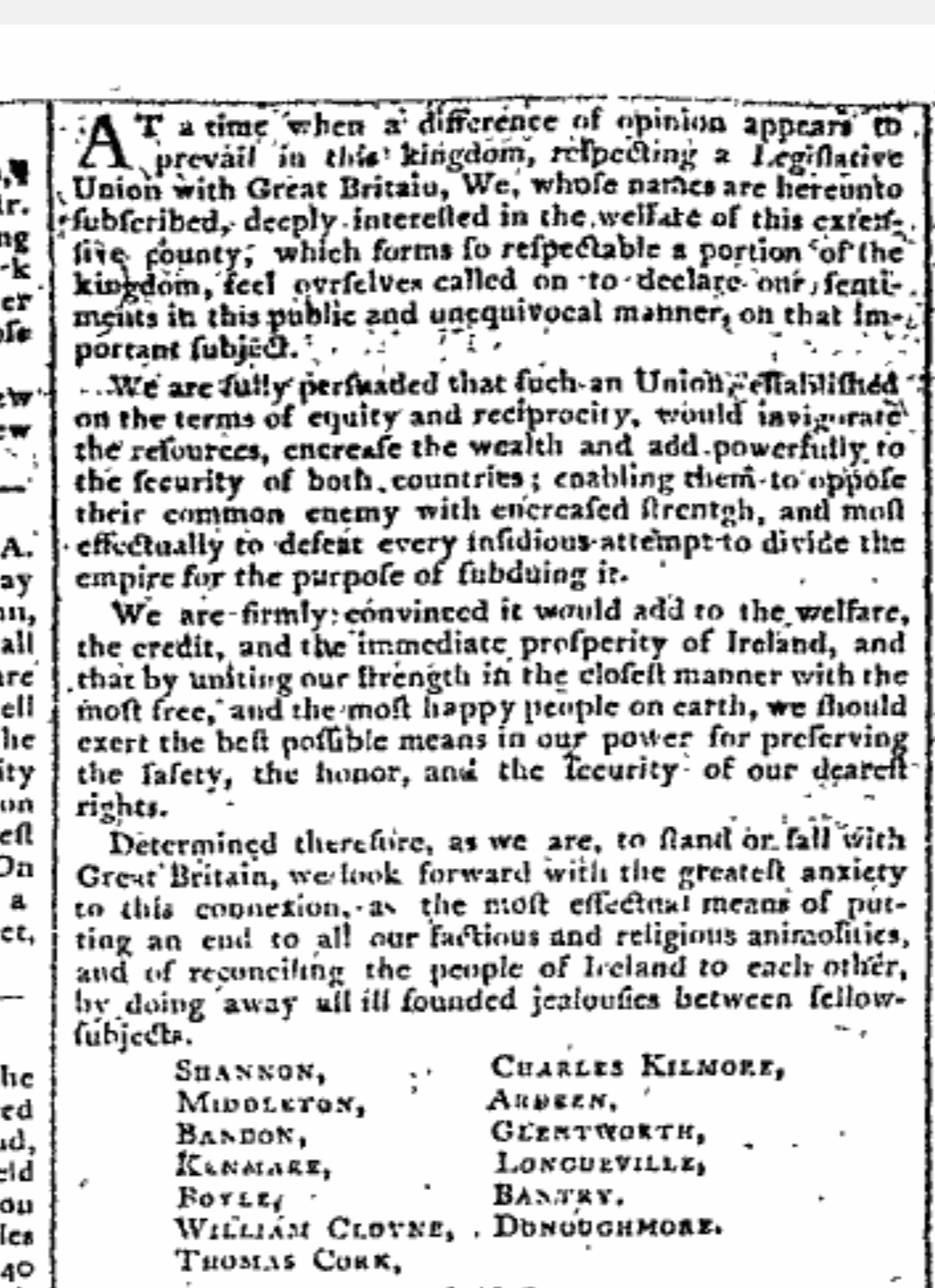 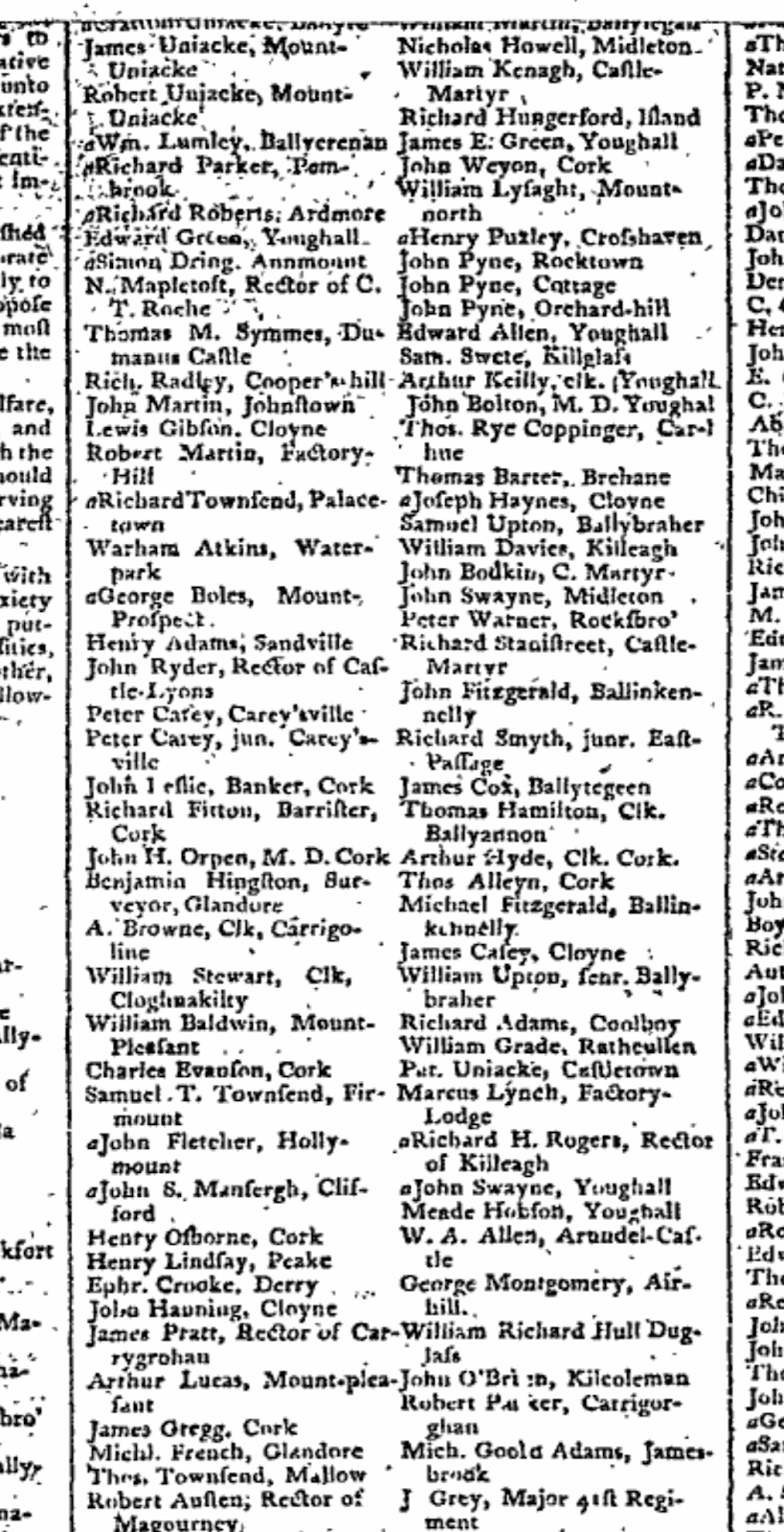 The list is headed by the leading Lords in the County although Bantry was probably only entailed after 1800.  The same pattern for Kerry  The civil Lords sat in the Irish House of Lords. 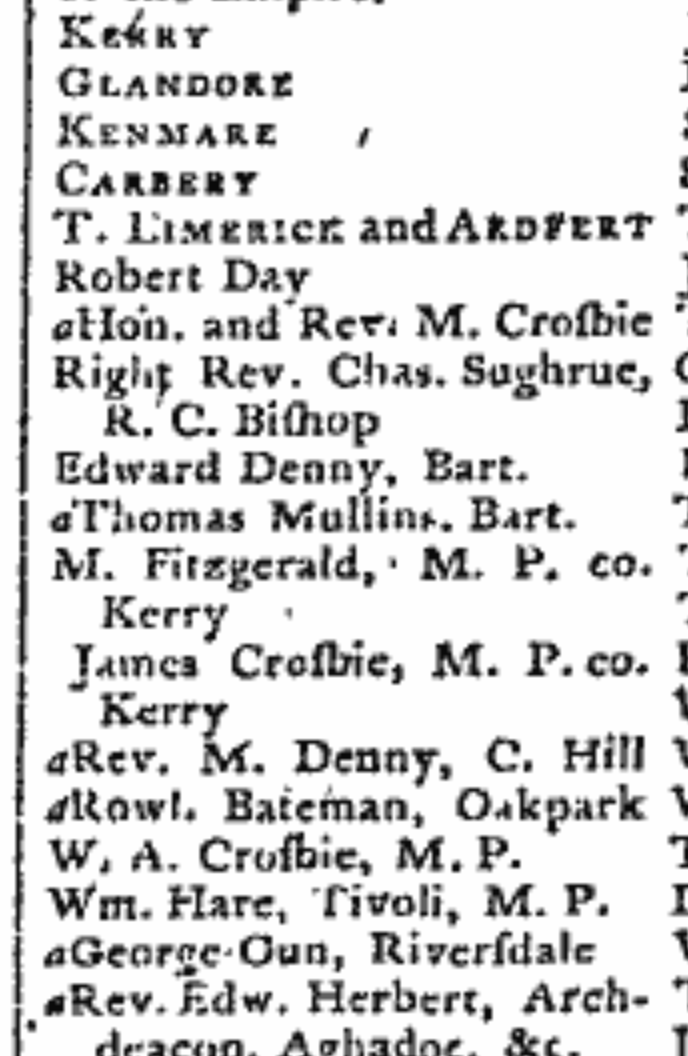 Family fortune based on agency to Devonshire estate founded by Richard Boyle, Great Earl of Cork.